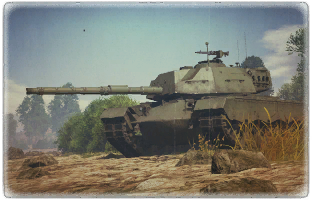 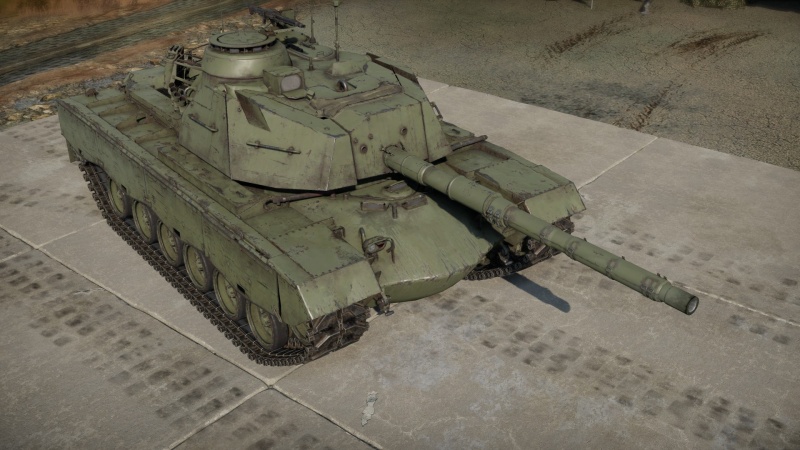 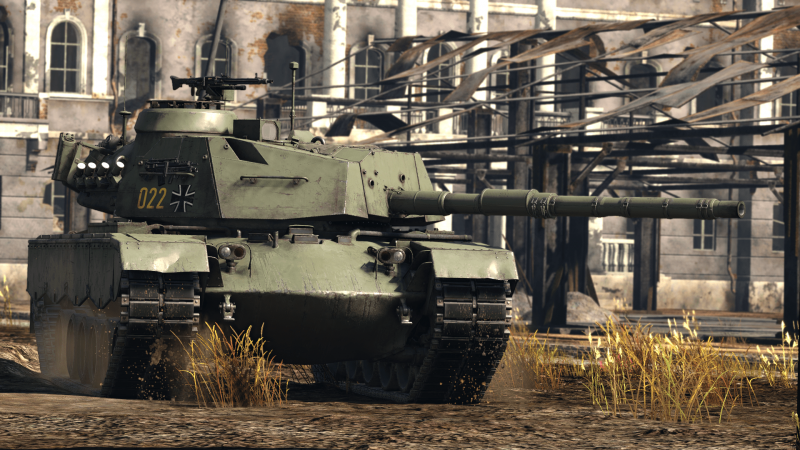 The Kampfpanzer M48 Super is a rank VI German medium tank with a battle rating of 9.0 (AB/RB/SB). It was introduced in Update "Starfighters". Private venture of Krauss-Maffei Wegmann company aimed to bring obsolete M48 Patton tanks to modern standards, this tank is the ultimate evolution of M48 tanks in German tech tree.

The mantlet caps at 480 mm against HEAT rounds and just 209 mm against APFSDS projectiles, nothing to brag about. You are resistant to autocannons and older HEAT rounds, but that's about it. Being based on the M48 Patton hull from the '60s, the hull is able to stop only autocannon fire and only from the front arc, as side shots will get through. Avoiding getting shot is vital to your survival. Sadly, blocky ineffective armour coupled with a tall profile makes this task difficult, if not impossible to achieve. Adopting hull down tactics is a must; on the bright side, your gun can depress to -9° and you can perform well in hilly terrain.

The M48 Super's mobility is average at best. Do not expect to rush favourable positions as most of the light tanks and wheeled combat vehicles will be there first.

Your focus should be on firepower upgrades. After parts and FPE, go for the DM23 round, as most tanks at this rank have either composite armour, ERA or in the worst case scenario both, making your stock HEAT round very ineffective. After that focus on getting thermals, those help you tremendously with finding targets and it is impossible to fight at night without them. Lastly, go for DM33 and laser rangefinder. Those make you a potent sniper and level your fighting chance against most opponents.

The M48 Super mounts a late-generation fully stabilised L7 cannon, which is pretty standard at this rank. It also has access to standard ammunition selection, though one thing to note is that it has the option to equip lethal DM33 rounds, which are the third best NATO rounds available for 105 mm guns (after M800 and DM63). 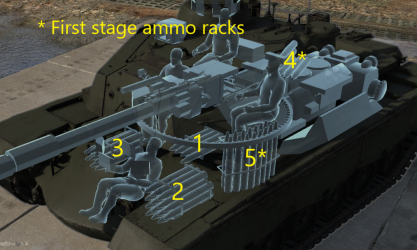 Ammo racks of the M48 Super

The coaxially mounted 7.62 mm MG3A1 is, in most situations, not useful. While being able to "blind" opponents by shooting at their optics, as with any MG, and able to easily dispatch of vehicles with exposed crew that have uptiered themselves, such as the M56, 2 factors really hold this MG back from being truly useful. These are:

Against some of the bigger and meaner helicopters such as Ka-50, it is simply better to not fire at all in order to stay hidden and not draw attention to yourself.

While the M48 Super can be played as a regular main battle tank, it works best as a sniper or support tank.

As a sniper, thermals, DM33 round and laser rangefinder allow you to quickly and effectively engage enemy tanks at any range. Using uneven terrain and going hull down, an entrenched M48 Super can shut down large portions of maps for the enemy team.

As a support, stabilised gun coupled with DM33 round can work wonders in CQC. Go with your allies with better armour, let them take shot, and as soon as you see enemy tank fire, lunge forward and send the enemy back to the garage. Your tall profile, which is otherwise handicap, can allow you to fire over friendly tanks without obstruction.

If you are forced to brawl, it is mandatory to make the first shot.

The Super M48 was a private venture offered by Krauss-Maffei Wegmann in the 1990s as a potential upgrade for the M48 Patton that was in service with a number of nations at the time. A total of 5 demonstrator vehicles were built using the M48A2GA2 as their basis. Unfortunately for the Super M48, its creation coincided with the end of the Cold War, which resulted in a surplus of newer American and Soviet tanks which were preferred over an upgraded older tank such as the M48. As such, no nation chose to procure the Super M48 upgrade solution.

The old engine of the M48A2GA2 was replaced by an MTU MB 837 Ea-500 V12 diesel engine producing 1,000 hp, much more powerful than the old engine. The transmission was also replaced by a Renk RK-304 transmission with four forward and four reverse gears. The suspension was nearly unmodified other than the five return rollers being reduced to only three. The new powerpack gave the Super M48 a top speed of 56 km/h.

The protection of the Super M48 was also improved by fitting a layer of composite material around the turret front and sides. This appliqué armour was modular and could be removed when not necessary or replaced when damaged. A spall liner was fitted to the interior of the vehicle. Four smoke grenade launchers were fitted to each side of the turret for a total of eight. Additionally, new sideskirts were fitted on the hull sides.

The main gun was the L7A3 105 mm rifled gun which could fire APFSDS, HESH, HEATFS, and HE. The secondary armament consisted of a coaxial 7.62 mm machine gun and a pintle-mounted 7.62 machine gun mounted on the commander's cupola. 46 rounds of 105 mm ammunition and 10,000 rounds of 7.62 mm ammunition were provided.

The tank's fire control system (FCS) was replaced by a MOLF 48 FCS built by Atlas Elektronik. It included a digital ballistic computer, a thermal sight for the gunner with an included laser rangefinder, and an optical rangefinder as a backup. The gun was fitted with a two-plane stabilization system and the gun and turret controls were replaced by an electro-hydraulic system.