Difference between revisions of "Pz.III M" 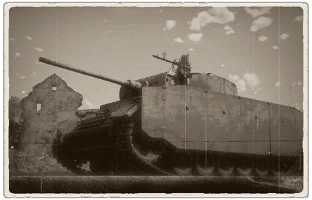 "This new tank was actually the Ausf. L variant, adapted to handle water obstacles up to a depth of 1.4 meters without requiring additional preparation. This was achieved by sealing all of the hatches, installing additional covers over the engine and ventilation air intakes, and installing a muffler high above the ground and equipped with a valve. The tank's length reached a total of 6,410 mm, including its cannon. The escape hatches in the side of the tank's hull were removed. This allowed the tank to carry 98 shells instead of the earlier 84. The smoke generators in the tank's rear were replaced with six mortars for launching 90 mm NbK smoke grenades. Almost all of the tanks of this variant were equipped with 5 mm Schutzen side skirts, increasing the width of the tank to 3,100 mm.

Tanks of this variant were used en masse in the summer of 1943, during the fighting in the Kursk Bulge area. At that time, about 60% of the German tanks on the Eastern Front were of this variant. After suffering heavy losses, the remaining tanks were converted into command vehicles, flame tanks, or self-propelled StuG III anti-aircraft guns."

Skins and camouflages for the Panzer 3 Ausf.M from live.warthunder.com. There are plenty of category terms flying around. So looking through every one of them will be necessary.