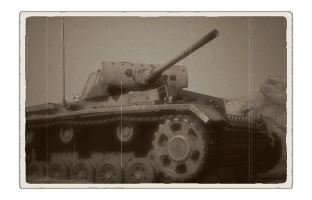 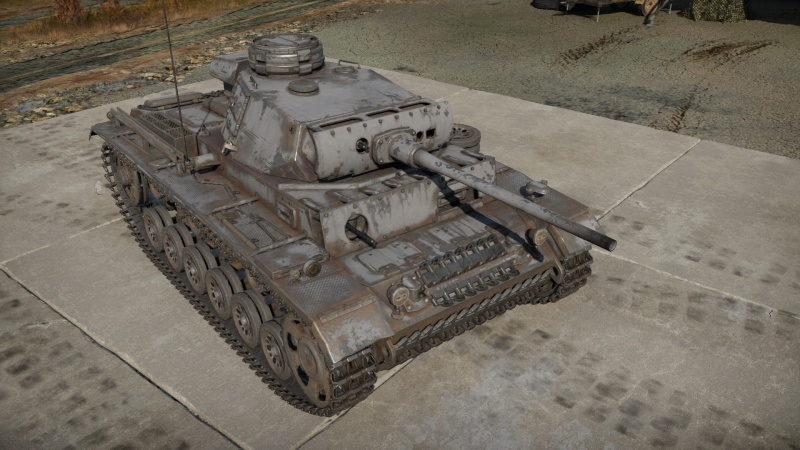 The Pz.Kpfw. III Ausf. L (Panzer III L) is a rank II German medium tank with a battle rating of 3.0 (AB/RB/SB). It was introduced during the Closed Beta Test for Ground Forces before Update 1.41.

The Ausf. L modification is intended to improve the protection of the J1 variant by mounting an additional 20 mm thick armour plates on the front of the hull and turret. While this certainly improve its resistance against HEAT and HE projectiles(which explode on impact, and damage only the first layer of armour), as well as classic AP, more than a single layer 70 mm would do, there are small "holes" in these armour plates - around the driver's viewport and machine gun port. Turret front armour itself also got increased from 50 to 57 mm.

The 5 cm cannon on this tank is best suited to short-mid range combat, while engaging enemies from the sides and/or rear if at all possible. This gun can allow the tank to hold its own in frontal engagements against angled KVs and T34s, but only at short range where the PzGr40s and 40/1 still have impressive penetration. The gun fires very fast and is accurate even at long range. When fighting tanks that can be penetrated easily, one should use the default ammo as it does more damage than the APCR. 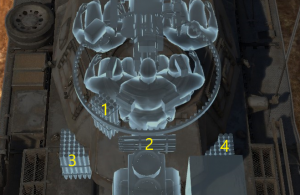 Production of the Pz.Kpfw. III light tank, Ausf. L variant began in June 1942. For a few months prior to this date, the military had experimented with installing the turret from the Pz.Kpfw. IV on this tank. This allowed the use of the long-barreled 75 mm KwK43 tank gun. However, this test proved unsuccessful, and in the spring of 1942, the armament department ordered the production of a variant equipped with the 5 cm KwK39 L/60, but including all of the changes that had been made during the attempts to install the turret from the Pz.Kpfw. IV. Because of this, the weapon mantlet, which also served as the weapon's counterweight, had to be reinforced.

An additional 20 mm front armour plate became standard design. Pz. III Ausf. L tanks received 57 mm of frontal turret armour, along with the installation of a torsion counterbalance for the gun instead of a coil spring. This resulted in a decrease of the ammunition carried for the gun. This variant received a 20 mm spaced armour plate in the forward part of the hull's superstructure. A coolant transfer system was installed which could move warm coolant fluid from one tank to another, making the cold tank easier to start in winter conditions.

During the second half of 1942, the companies Alkett, Henschel, MAN, MNH, MIAG and Wengmann built 653 Ausf. L tanks.

These tanks were used to replace the losses which had been incurred by the army. They were widely used in Africa and on the Eastern Front from 1942 to 1943. In the summer of 1943, before the Battle of Kursk, the tank was equipped with 5 mm Schutzen side skirts around the hull and turret to protect it from anti-tank and hollow-charge projectiles.