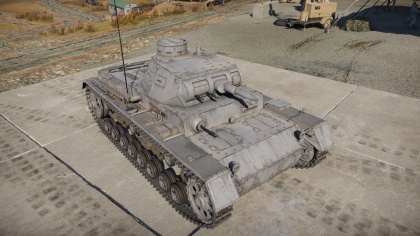 The Pz.III B is one of the worst starter vehicles in terms of overall survivability. The armour thickness of the hull and sides are 14.5 mm thick, with 16 mm on the turret face. This isn't even enough protection to nullify heavy machine gun fire, which leaves this vehicle almost universally vulnerable from almost all vehicles present in the lower ranks. By angling the hull, you can potentially bring the protection up to 20 mm effective on the front and sides, but this is a superficial boost to armour and will still not reliably protect the tank from any incoming rounds. The only advantage survivability wise this vehicle has is the crew count as it has 5 members. Because most of the incoming fire is going to be from low caliber AP rounds, it's very unlikely that this tank will be taken out in a single shot, though this is more of a passive advantage and not something you can actively make use of. 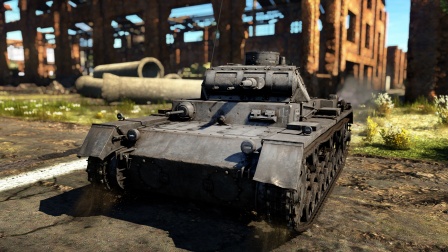 The Pz.III B, distinguishable from the E by the cylindrical cupola

The Pz.III B has fairly unimpressive mobility across all fronts, it can reach a max speed of 35 km/h in RB modes, and 39 km/h in AB modes. Compared to other reserve tanks, this is on the slower side by a large margin and therefore will struggle when it comes to reaching good spots early, pushing across the map and retreating from combat. This tied with the lack of meaningful armour really hurts this tank's overall performance. The only positive aspect of this tanks mobility is its hull traverse, which can help turn the turret and cannon quicker than just using the turret traverse on its own. 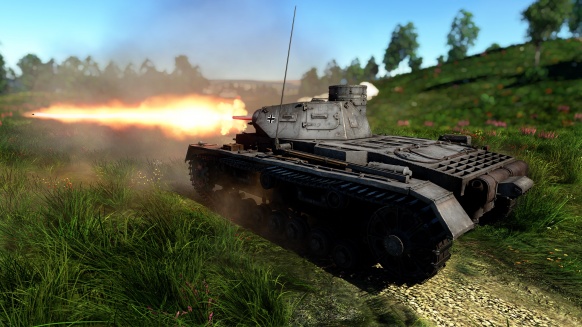 Overall, the Pz.III B doesn't have many reliable advantages, both the armour and firepower leave a lot to be desired, although its mobility is somewhat functional. However, it just doesn't have any decent aggressive aspects to it that good mobility benefits, meaning that although it is the Pz.III Bs most functioning asset, it's still not reliable to play aggressively on the move. The Pz.III B isn't equipped with a short stabiliser, meaning that the gun will be very unstable when coming to a stop, whereas the majority of allied vehicles do have this feature. So if you were to run into one of these vehicles on the move, your enemy will likely get the first shot off, and as your armour protection is so poor they will likely deal critical damage.

A somewhat reliable way to stay alive in this tank is to play hull-down, a lot of the rounds you'll be taking will be small caliber AP shots. If only your turret is exposed, these rounds will only usually take out 2 crew members at most, allowing for you to back off, repair and reengage. Try not to play too far away from your enemies. The performance of the gun is overall very poor at distances, so even though survivability will be increased by playing at range, firepower will be very inconsistent, so try to find a spot that isn't too far away from combat.