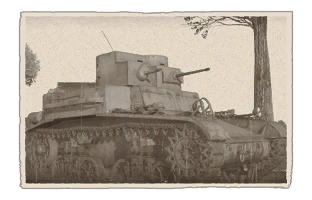 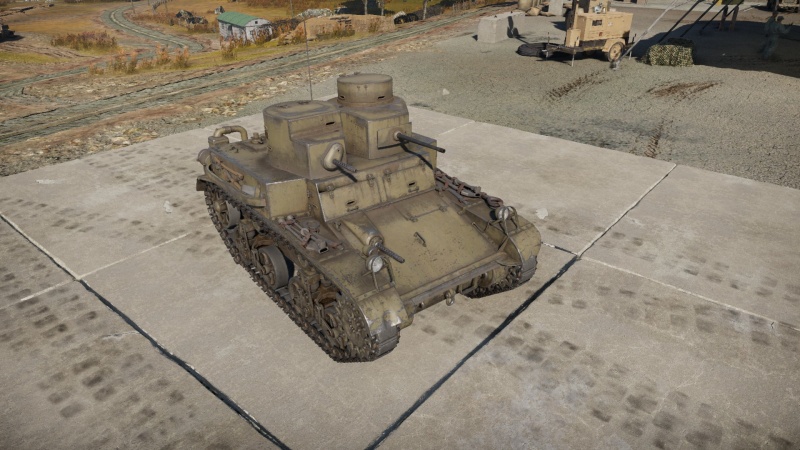 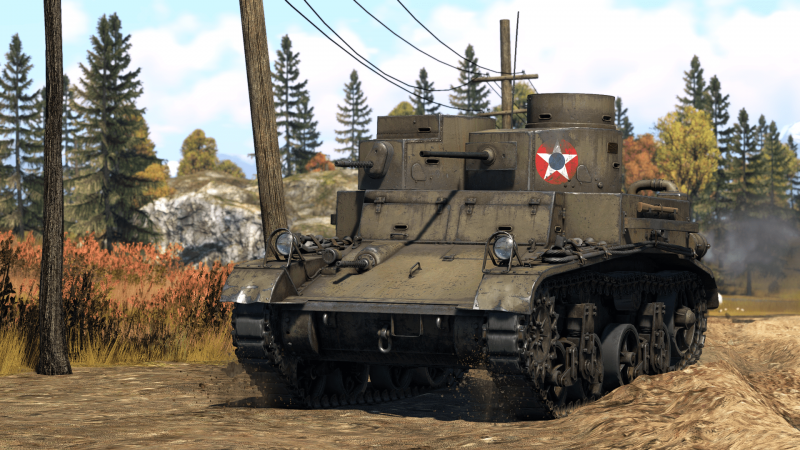 The most common and most used American tank in pre-war years. The M2A2 was armed with a .50 and .30 calibre machine gun. The Spanish Civil War showed that tanks with MG as main armament were ineffective. This led to the upgrade to the M2A4. In the game, the M2A2 is lightning fast, with very weak armour and a subpar armament.

The whole armour is made out of rolled homogeneous armour plates. Tracks provide 15 mm of armour. 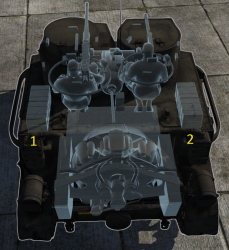 Ammo racks of the M2A2

The M2A2 is armed with a secondary .30 cal machine gun in a separate turret, as well as another emplaced in the hull. This extra turret restricts the traverse angles of both this and the main turret. The machine guns can be against very lightly armoured AA vehicles and can be used as a distraction against enemy tanks.

The M2A2 is a strange vehicle as a twin-turreted machine-gun armament only vehicle. It is, however, fast, and could be sped around as a scout tank to get on the enemy's side. Your main turret, which uses 12.7 mm (.50) MG can only fire forward and to the left, with secondary turret (which sports standard 7.62 mm (.30) MG, which can only really scare SPAA trucks) firing to the right. Additionally, the M2A2 has a working hull machine gun, but it is fixed to the hull and angled up so its usefulness is extremely limited.

The .50 cal main armament makes it necessary to rush as close to enemy as possible, as it could only penetrate ~20 mm at standard ranges, meaning that it is only really effective against the reserve tanks, and even so, the machine guns often may only be effective when shot at the flat sides or even only at the engine deck.

Avoid any "medium" and "heavy" tanks like M13/40 or R.35 (SA38), as they will resist even pure AP belt fired point blank. Avoid messing with tanks of BR 2.0, as even lightly armoured tanks of that rank are only vulnerable from the sides and only from about 100 m away or closer. If you absolutely have to attack them, drive in circles around them and shoot at their weak spots, like engines or turret neck, whenever you get a chance.

Mostly your targets will be "scout" and "sniper" tanks, as you can do serious damage to them. To avoid getting annihilated while attacking them from the front, you can fire at their turret while approaching them. Quite often, even if you can't penetrate them as is, they will un-angle themselves, trying to fire at you by turning their flat turret armour parts towards your fire, dooming themselves. If it didn't penetrate, you already lost and shouldn't have attacked them in the first place.

A lot of light tanks and tank destroyers will have stronger turret or gun mantlet armour, than the hull. In such case, simply fire at their hull, trying to get their gunner and driver as soon as possible. Remember, they often don't have to turn their hull towards you to fire back, and angled hull may actually ricochet MG bullets, so it's better to attack from their sides, or at the very least completely head-on.

Overall, it is best to not go around the map without a teammate with a cannon to provide a substantial upgrade in firepower, should it come face to face with the enemy.

Another way to use the M2A2 is as an SPAA. The turrets have decent gun elevation so hitting aircraft is quite easy. The .30 and .50 cal machine guns are very good at destroying any planes at its BR or at least will cripple them. It is recommended to turn the hull with the turrets so you can fire both guns and will not end up only firing one.

The idea of light tanks started with the Defense Act of 1920, which defined tanks as an infantry support weapon, but the idea of a cavalry role for the tanks was brought up by multiple theorists, to which the British were the first to incorporate with the cruiser tanks. Limitation in American development leads to the establishment of light tanks as the combat cars. The development team soon looked at the tank prototypes T1 Light Tank and the T2 medium tank and decide to use them as the basis for the light tank design.

Modifications made onto the experimental tanks, mostly installing the new Vertical Volute Spring Suspension (VVSS) that would be the main suspension in future American tank development, made the tanks into the M2A1 Light Tank. The main version used before the war was designated the M2A2, which had two turrets, both with a .50 calibre M2 Browning as its armament. However, the Spanish Civil War showed that this kind of tank is insufficient in tank warfare, so initially the design was revised with improved armour up to 22 mm (M2A3) and then with one turret with a 37 mm cannon, this would become the M2A4, which would be the main light tank variant in US service before World War II broke out.

Britain ordered some M2 light tanks in early 1941 in part of the Lend-Lease Act, but only 36 were delivered before switching to the improved M3 light tanks.

A unique feature on the M2 Light tank was the number of machine guns it could house. Aside from the coaxial and the bow gunner's ball mounted one, two machine guns were fixed facing forward on the sides of the hull, fired by the driver. Another M1919 Browning machine gun could be mounted on the turret top for anti-aircraft use.