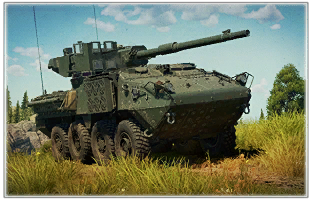 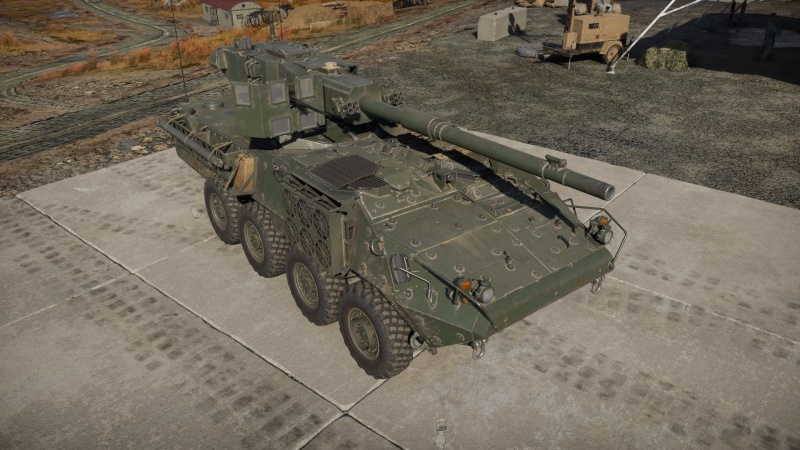 105 mm M68A1E8 cannon
Two-plane stabilizer
Reduces the swing of the gun in two planes while moving
Autoloader
Automatically feeds projectiles into the breech. The speed does not depend on the skills of the loader
Ammunition18 rounds
First-order8 rounds
Reload7.5 s
Vertical guidance-5° / 15°
Main article: M68A1E8 (105 mm) 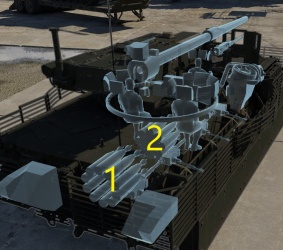 The M1128 is best played as an ambush-sniper. Take full advantage of the vehicle's mobility to get to sniping positions first and avoid open areas when you can. With the M1128's unmanned turret, it is best used at a hull-down position. The M1128 is also vulnerable to the overpressure mechanic and has inconsistent and poor armour which means that you should approach all enemies with caution. When the opportunity presents itself, it is always best to double back or reposition and fight your enemy in a position fight.

The M1128 performs rather poorly in urban combat since it is a large vehicle. Although it has an excellent turret traverse speed, close-quarters fighting is not advised as the tank is vulnerable to all kinds of fire. The M1128's reload rate is decent for its BR and is able to quickly dispatch multiple enemies. Therefore, you should avoid close-quarters engagements and try to reposition when possible.

The M1128 excels in large, open maps. Taking full advantage of its mobility and firepower, it is best to reach advantageous positions early in the game. Using the high-resolution thermal sights, it is easy to spot enemies and quickly neutralize them. 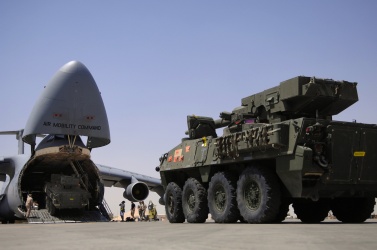 Two M1128 Strykers being loaded into C-5 Galaxy aircraft, representing its ability to be transportable by air.

The XM1128 MGS was designed by General Dynamics Land Systems (GDLS) - Canada to meet the US Army's Mobile Gun System (MGS) requirement, a requirement for an airmobile infantry support platform that could double in the anti-tank role. The first XM1128 prototype was completed in 1999, and after being chosen as the winner of the competition, eight pre-production units began delivery in 2002 after being redesignated as the M1128 Stryker MGS. The M1128 Stryker entered service with the US Army in 2007.

The M1128 Stryker uses the chassis of the GDLS-Canada Stryker - which is based on the LAV-III. The General Dynamics Low-Profile Turret (LPT) is used, which is a modified version of the turret from the Expeditionary Tank. It is designed to be light enough to easily be transported by air. In 2005, after issues with the autoloading mechanism, the autoloader was changed.

The driver sits in the front left part of the hull, next to the engine on the right side. The driver can access his position through a hinged, one piece folding hatch or through the crew compartment. Three M17 day periscopes are located in the driver's hatch; the first one can be replaced by an image intensifier for night operations. A thermal viewer can be fitted in front of the driver as well.

The LPT is located towards the rear of the hull, with the commander sitting on the right and the gunner on the left, rounding off the crew of three. The LPT is significantly lighter than a conventional turret, whilst also presenting a smaller target to the enemy.

The main armament is a 105 mm M68A1E8 gun. It has 360° of traverse and elevation angles of -5° to +15°. The turret uses electrical controls, but manual controls are available for emergency situations. Both the gunner and commander can control the turret and fire the main gun. The main gun has a fire rate of 10 rounds per minute.

The gunner has a single piece hatch with three M27 day periscopes. He also has access to a roof-mounted day/thermal sighting system with a laser rangefinder. The commander's one piece hatch has six M27 day periscopes and on production vehicles also has a panoramic viewer with day and thermal capability. As a backup to the main winner's sight, a x7 magnification day sight is provided for both the gunner and commander.

A 7.62 mm machine gun is located coaxially to the left of the main gun. Additionally, a 12.7 mm machine gun is available for use by the commander. On pre-production units the .50 cal machine gun was pintle-mounted, but it was mounted on a skate rail on production vehicles. Smoke grenade launchers are mounted on each side of the turret, with the amount and location depending on the model (prototype, pre-production, or production). The production version has two banks of four smoke grenades on the left (gunner's) side and one bank of four on the right (commander's) side, for a total of 12 smoke grenades.

The main gun and coaxial machine gun are fully stabilized, as are the gunner and commander's sights. The General Dynamics fire-control computer is used as the fire-control system (FCS).

The M1128 utilizes welded steel armour, with a layer of ceramic applique armour bolted to the exterior as standard. A small liner is fitted to specific areas of the interior to minimize the damage of a penetration.

An armour package consisting of slat, also known as bar, armour can be fitted. This prematurely detonated rocket propelled grenades, preventing penetration. To further enhance protection, composite screens can be added to protect the wheels.

The powerpack is located in the front of the hull, to the right of the driver. It consists of a Caterpillar 3126A diesel engine - producing 350 horsepower - and an Allison MD 3560 P automatic transmission. The transmission has six forward gears and one reverse gear. The maximum attainable speed is 100 kph, and it has a range of 530 km.

The M1128 has eight wheels and uses power-assisted steering, with the front two axles being engaged in steering. A central tire pressure regulation system is fitted to allow the adjustment of tire pressure as needed.

The M1128 Stryker MGS is fitted with a heating and air conditioning system, vehicle and external communications system, an automatic fire detection and suppression system, and a GPS. A nuclear, biological, chemical (NBC) protection system is fitted for the crew compartment.

An auxiliary power unit (APU) can be fitted, as can a hydraulic winch for self-recovery or for moving of other vehicles or obstacles. 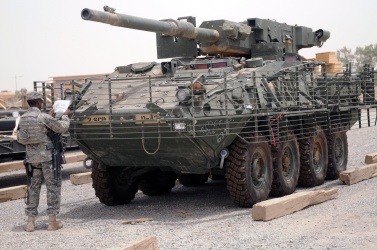 A M1128 Stryker in Afghanistan fitted with slat armour.

The XM1128 prototype was first built in 1999, and eight pre-production vehicles were built by 2002. The Army originally planned to purchase 204 M1128 Strykers, but only ended up buying 142 in total, due to issues with the turret and autoloader.

In 2013, there were 27 M1128 Strykers assigned to each Stryker Brigade, but the number was then reduced to ten. The M1128 Stryker MGS is - and was always intended to be - used to support the infantry. Despite having anti-tank capability, anti-tank operations are a secondary role for the Stryker MGS, with infantry support being the primary role.

Three M1128 Strykers have been lost to combat in the Middle East.

Following the end of the Cold War, leading U.S. Army theorists believed that the armoured branch of the armed forces was no longer suitably equipped to perform future operations, projected to be "low-intensity" operations. As a result, the need for a new vehicle, which would bridge the gap between heavily and lightly armoured units, became increasingly apparent.

To address this, the Army issued a set of requirements for the new vehicle and invited close to a dozen manufacturers to design demonstrator vehicles to be tested in late 1999. Among them, General Dynamics Land Systems' LAV III-105 was eventually proclaimed the winner of the competition in November 2000. Shortly after, the LAV III-105 received the name 'Stryker' and plans were made to manufacture over 2,100 units.

In 2002, the XM-M1128 MGS was built, however technical difficulties and deficiencies in the design caused delays to the start of its production. By 2005, low rate production of the vehicle was approved, while new shortcomings in the design were found. Eventually, the vehicle received a significant redesign of certain elements in 2008, being later approved for full production in 2014.

During its early production phase, several Stryker MGS vehicles were sent overseas for combat trials in the Middle East of which 3 would be lost. At present, over 140 M1128 Stryker MGS' have been built and actively serve with the U.S. Army.