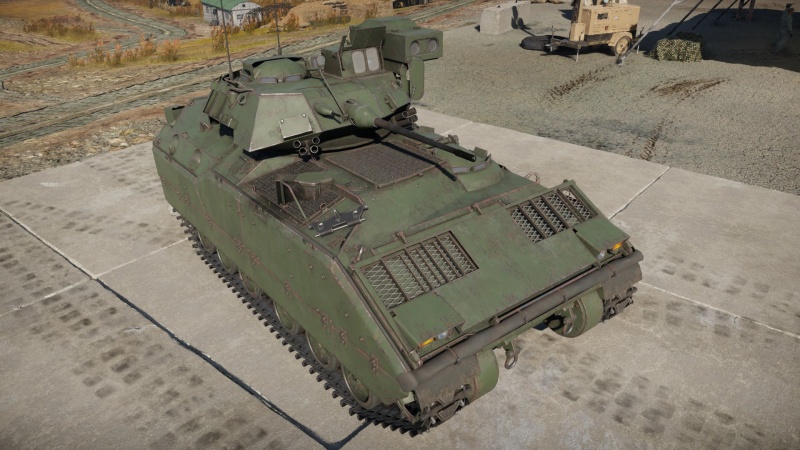 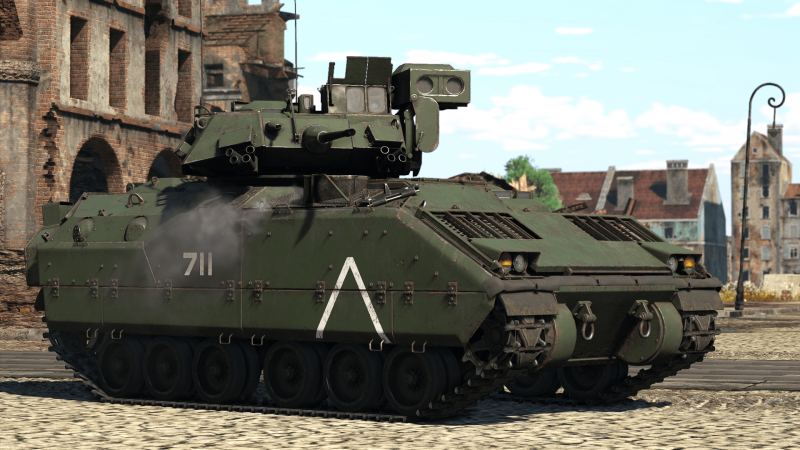 Armour protection of the Bradley CFV (Cavalry Fighting Vehicle) is relatively weak, it does offer protection from machine guns and some lower penetrating autocannon fire from the front, but most autocannons will easily penetrate the sides of the vehicle damaging components, crew and often detonating ammo stored in the rear of the vehicle. As aside, the engine mounted in front of the vehicle will offer some protection from main guns on tanks by absorbing spalling, saving crew members and preventing ammo detonations. Getting your gunner shot out is common, however, the breech of the autocannon is very small and therefore does not generally get knocked out. Losing too many crew members is common, as there are only 3 in the tank.

Ammo racks of the M3 Bradley. Racks outlined in red are 25 mm clips.

The M3 Bradley comes equipped with a BGM-71B TOW ATGM launcher. The launcher contains two TOW missiles, which can be fired one after another in quick succession. Then, they are reloaded. Before you can fire, though, you have to be either stopped or moving at very low speeds, around 5 km/h. At higher speeds, the launcher folds up against the turret. When you stop, it takes time for the launcher to unfold before you can fire. This is where cruise control can be important. The first cruise control setting for forward and reverse speed is the "battle" setting. This controls the speed of the vehicle to where it is slow enough that you can fire the TOW missiles on the move. As before stated, this speed is very low, only about 5 km/h, so you should probably not drive in this mode of cruise control for the whole battle.

One last note: the TOW missiles should be your primary weapon, not your autocannon. Firing the autocannon will likely give away your position instantly, so unless you have already been seen, or if you know you can kill the target quickly, do not use the autocannon. The autocannon can not effectively destroy tanks but is mostly just effective against SPAA's and light tanks. Those targets can also kill you very easily though, so it is almost always better to use the TOW missiles, in order to destroy the enemy tank quickly and efficiently. On the other hand, if an enemy tank is at close range, and has spotted you, you can often use the autocannon to damage or destroy their gun barrel with multiple, well-aimed, shots, to buy yourself more time.

Similar IFVs of other nations