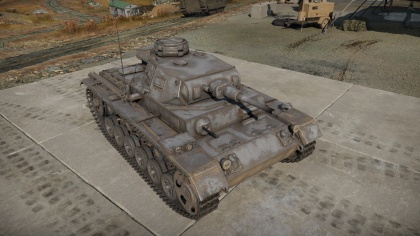 Use of this tank is similar to the Pz. III F, and while it does have significantly better armour on the front than its predecessor, the higher BR of 2.3 means it faces MUCH nastier opposition in semi-frequent up-tiers to 3.3. T-34 (1940)s are almost unpenetrable from any side except flat-on below the tracks. M4A1s are similar in speed to you, have thinner sides, are spacious, have powerful guns, and stabilizers. Cromwells are much faster than you with stronger guns. You literally can only hope for them to get overconfident, overextend, and shoot them in the side or rear. APCR post-penetration damage is not reliable enough to be counted upon when you need it the most, plus neither PzGr.40/1 or PzGr.40 can frontally pen a Sherman or T-34 anyway. The gap between 2.3 and 3.3 is tremendous, and is just as crippling as that between 6.7 and 7.7, for an accurate relative comparison.

Furthermore, even in the best circumstances, the high fuse sensitivity makes many lightly-armoured things with strong guns your worst nightmare, since you'll over-penenetrate repeatedly in most cases, allowing easy return fire from the person you failed to knock out, which more often than not cripples you. Enemy SPAAG, in particular, is frustrating to KO because of your 15 mm turret ring weak spot enabling them to spray all over you to KO your gunner and loader.