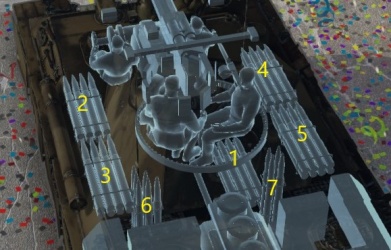 In March of 1943, plans were laid that the production of the first series would start in late 1943 or early 1944 and that by spring of 1944, full-scale production of Panther II would start. On May 20th of 1943, Rheinmetall-Borsig proposed special air-defence turret designed for Panther II, mounted with four 20 mm MG151/20 guns but it never reached prototype stage. Non were produced.

In early 1944, MAN (Maschinenfabrik Augsburg-Nuremberg) was allowed to produce two prototypes but was only able to produce one in early 1945, without newly designed Schmalturm turret. On May 4th of 1944, it was realized that German industry was unable to start Panther II's production and this project was abandoned in favour of further development of Panther based on lessons learned from Panther II. On June 3rd of 1944, all companies which were to produce Panther II were ordered to start the production on the regular Panther tank. The war ended before the Panther II could be used in any meaningful way to the war effort.

The project would go on to be developed into the Panther F, which featured the Schmalturm derived from the Panther II.