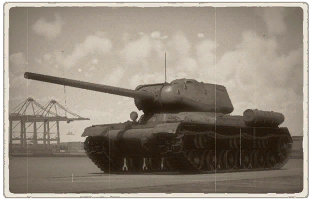 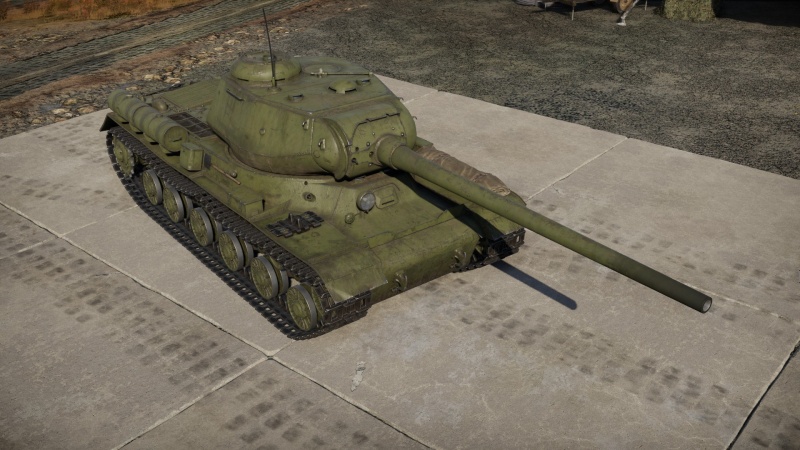 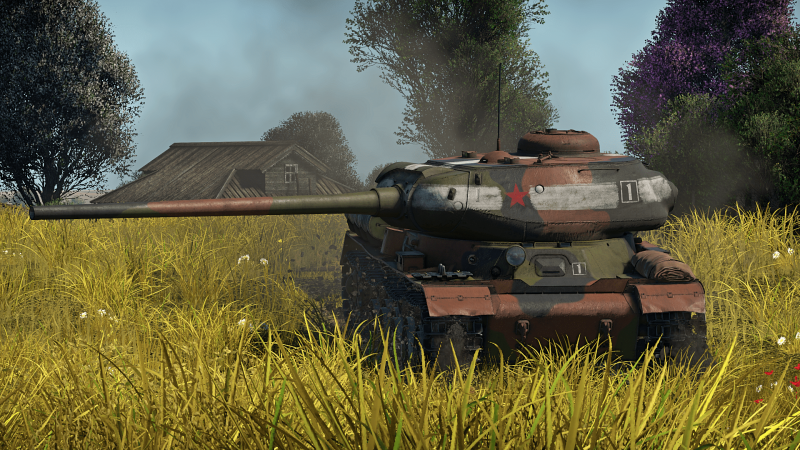 The Object 248 is a premium gift rank IV Soviet heavy tank with a battle rating of 6.7 (AB/RB/SB). It was introduced during Update "Danger Zone" as a reward for Battle Pass: Season VIII, "Field Testing".

The Object 248 inherits the hull and turret of the IS-1/2. At this battle rating, this level of protection is overall very lacklustre, although the all-round armour is very effective against SPAA and low tier vehicles (e.g. M42, Crusader AA). The hull is the same as early IS-1/2 models instead of the 1944 model, meaning the 120 mm thick upper front plate (driver's port) will easily be penetrated by almost any tank (e.g. Panther G, Jagdpanther, M26, etc.). Same applies for the large, poorly angled 100 mm lower plate. The only places that can resist some shots are the upper glacis and the rounded "shoulders" which are all very well angled. Note that the curved "shoulders" will become unangled when angling the hull, creating another weak spot, so the player must balance the angling very well. The side thickness of the hull ranges from 100-90 mm, which is thick enough for some angling tactics against kinetic shells. Even when not angling, hits on the hull side might get absorbed by the track or the gap between the hull's upper edge and the turret's lower edge. However HEAT shells (e.g. Type 60, M41) will still easily penetrate the Object 248. The rear hull's 60 mm thickness and angling is not enough for it to resist any common guns, however the engine behind it can absorb most if not all penetrations.

The turret is also poorly armoured. It has an all-round thickness of 100 mm which may help to bounce some shots with luck. The frontal turret is covered by a large curved gun mantlet which might absorb some shells if they come in contact with the barrel, but that's about it. Well-aimed shots will easily go through the flat parts of the frontal turret or the tall commander's cupola.

The post-penetration survivability is also unsatisfactory, given the cramped design style of Soviet tanks. Frontal penetrations of AP shells through the lower front plate, driver's port, or the turret will usually be a guaranteed death as the closely packed crew of 4 are easily affected by explosion or shrapnel. Penetrations from HEAT are usually not as deadly though can still do critical damage. Side penetrations can very much result the same. Rear penetrations on the hull, as mentioned above, are likely to get blocked by the engine, thus a tactic is to drive the tank backwards and use the engine and radiators as extra armour, at the cost of constantly getting set aflame.

The mobility of the Object 248 is satisfactory for a heavy tank. The forward speed on average is about ~35 km/h on paved flat road, and ~20 km/h cross-country, which allows it to keep up with similar teammates like IS-2 and Tiger H1. The acceleration on all terrains is not exactly agile as a result of the rather underpowered 520 hp engine driving a 46 ton body (the power-to-weight ratio is just over 11 hp/t - quite low). The hull traverse is very slow, and becomes more sluggish when driving on loose surfaces like mud or snow, so a short forward/backward motion is needed to turn the hull faster. The reverse speed of -14 km/h is a great advantage, as it enables the Object 248 to quickly go back to cover if needed, as well as to use the backward-driving tactic above.

IS-2 players would become best friends with the Object 248's main gun very fast, since it gets rid of the long reload while keeping the excellent one-shot capability. This 100 mm S-34 cannon has a quick reload time of around 10 seconds which is generally fast enough for most situations. The reduced calibre also increases the ammunition capacity to 31 rounds at most, allowing the player to significantly lengthen their battle time without resupplying ammo. The BR-412B APHEBC shell is extremely powerful, with ~210 mm penetration at around 400 m, and 184 mm at 1,000 m. This level of penetration is adequate to frontally crack even the hardest nuts at its battle rating, such as Ferdinand, Jagdpanther, Ho-Ri, M26, etc. More commonly seen and less armoured tanks like Panthers, M4 Shermans, Centurions, etc., are of course even easier to deal with. Upon penetration, the shell's 100 g explosive filler will effortlessly knock out most if not all crew inside the target tank. However, one slight downside of it is the reduced explosive mass comparing to the 122 mm BR-471B's 246 g of explosives, meaning when shooting spacious vehicles like Jagdtiger, you should attempt to target the centre mass of the crew so the shell explodes as closely to their middle as possible, to guarantee a one-shot kill. The shell also has a slightly higher velocity and flatter trajectory, making it easier to land shots at distant and/or moving targets.

The main gun aside, other aspects of the Object 248 don't quite complement the firepower, rather they are drawbacks. Firstly, the familiar awful gun depression of -3° which completely hinders the Object 248's capacity to fight on uneven surfaces. Even a small bulge on the ground would obstruct the gun from aiming down, so the player is left with fewer spots in all maps to unleash their firepower. The turret rotates quite slowly too, at around 10°/s, which is inadequate to quickly change a target. This can be fatal when the Object 248 is being flanked. Lastly, the poor gunsight zoom of 3.5x at max limits the tank from ranged engagements, as it is hard to see a target with low zoom.

The Object 248 is armed with a 100 mm S-34 cannon which offers the ability to compete against higher BR vehicles than the IS-2 series, thanks to the higher penetration and faster reload speed the gun offers the tank can perform very well when played smart and careful.

The Object 248 should be treated as a medium tank as it has relatively little armour for a heavy tank for its BR. Play it as a medium tank (T-34 and T-44) and refrain from engaging head-on with enemies, instead flank the enemy from the sides or attack from cover. The tank is perfectly capable of this and can be very lethal when used in this way. But play carefully as a single hit could be enough to take you down due to poor armour.