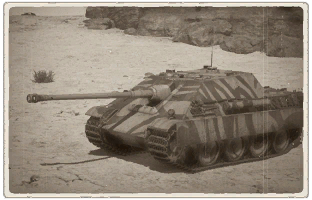 The Jagdpanzer V Jagdpanther is a rank IV German tank destroyer with a battle rating of 6.3 (AB) and 6.0 (RB/SB). It was introduced during the Closed Beta Test for Ground Forces before Update 1.41.

Lighter shells (i.e. 76 mm M1 from the Sherman, 88 mm L/56 from the Tiger I, 90 mm M3 from the Jackson/Pershing) will have issues with shells ricocheting off the front plate due to the angle of the tank's upper frontal plate. However, heavier and/or higher velocity shells (SU-152, IS-2, T29/T34 are examples of tanks that will not experience this problem very much) will not have this issue due to the weight or velocity compensating for the increased slope and penetrating anyway (that is not to say that these types of shells cannot bounce, it is just much rarer due to their weight and high velocities.)

The Jagdpanther has decent mobility overall, however, there is one major downfall to this vehicle: its extremely slow reverse speed. For this reason, the Jagdpanther cannot relocate quickly so it is best to position your vehicle in a spot where repositioning won't be necessary.

The main armament of the Jagdpanther is the 88 mm PaK43 gun, which is one of the best all-around tank weapons at its BR. With an 11-second reload stock, it is accurate as well as causing large amounts of damage during a penetrating hit, as it also contains explosive filler that detonates once inside the hull of the target.

Ammo racks of the Jagdpanther

The machine gun on this tank is functional but is not powerful enough to cause any damage even to lightly armoured targets (such as AA vehicles).

Nazi Germany created the formidable 8.8 cm Pak43 anti-tank gun, a longer version of the 8.8 cm KwK36. 2 attempts were made to fit this gun onto a self-propelled configuration, the first was Panzerjäger Tiger (P) Ferdinand (later Elefant) and the second was the Nashorn. However, the Ferdinand was too heavy and unreliable while the Nashorn was too small and underpowered to propel such a gun. The Jagdpanther was proposed in late 1942, as a tank destroyer from the Panther chassis that could mount the formidable 8.8 cm Pak43 with good armour and speed. The tank destroyer was created and designated Sd.Kfz. 173 and was demonstrated to Hitler on October 1943. Production then started in January 1944 under the simpler name Jagdpanther by Hitler rather than using the longer 8.8 cm Pak43/3 auf Panzerjäger Panther.

Throughout its production life of January 1944 to 1945, 415 total of these vehicles were made. MIAG produced 270 from January 1944 to the end of the war, MNH produced 112 from November 1944, and MBA produced 37 from December 1944. The supposed goal was 150 Jagdpanther produced a month, but Germany's deteriorating situation made this impossible. The Jagdpanthers were made in two variants, G1 and G2. The G1 had a small internally bolted main gun and modified Panther Ausf. An engine deck while the G2 had a larger simplified, outer bolted mantlet with a modified Panther Ausf. G engine deck. A proposal to mount the 12.8 cm Pak80 was mentioned but never came around to production.

One of the most powerful and most successful German tank destroyers of World War II. This tank destroyer was designed by the company MIAG and was based on the Pz.Kpfw. V Panther tank. From October 1943 to April 1945, the MIAG, MNH, and MBA factories produced a total of 413 Jagdpanthers.

The Jagdpanther was mass-produced in three variants which differed in the following ways.

The first variant was the early version of the G1 self-propelled gun, produced from January to September 1944. These vehicles had an 88 mm 8,8 cm Pak43/2 gun with a one-piece barrel. The gun was fixed to the front armour with bolts inside the vehicle. Anti-magnetic Zimmerit paste was applied to the vehicle's vertical surface in its characteristic squares. Also, this variant lacked a snorkel. The plate covering the engine either completely lacked an opening or had an opening which was plugged closed.

The second variant was the standard G1, which had an 88 mm 8,8 cm Pak43/3 gun with a composite barrel. This tank destroyer also received a new gun mantlet. Zimmerit was not applied. Heat shields were installed around the exhaust pipe, and the guide wheels had a larger diameter.

The third variant was the G2, which was equipped with a new gun mantlet reinforced with bolts. An armoured plate taken from the Pz.Kpfw. V Ausf. G Panther tank was installed over the engine. The trenching tool and cleaning rod tube was moved to the rear.

This tank destroyer was a very effective weapon against all types of Soviet and Allied tanks. It was used on the Western and Eastern fronts until the end of the war.

For a heavy vehicle, the Jagdpanther had good speed and manoeuvrability. On the other hand, this self-propelled vehicle inherited a number of disadvantages from the tank it was based on, primarily low mechanical reliability and relatively thin side armour.