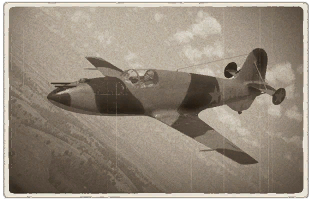 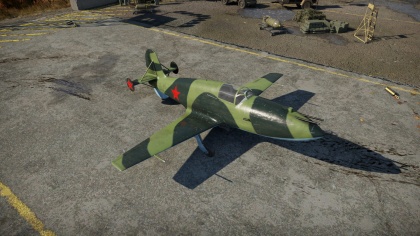 The BI is a gift rank V Soviet jet fighter with a battle rating of 6.3 (AB/RB/SB). It was introduced during Update "Raining Fire" as a reward for the 2020 Wargame "Strategist" event, and is currently available for sale on the Marketplace.

To get the longest endurance out of its limited fuel amount, climb from the airfield at an angle of 70-80 degrees, at full throttle and as you hit 3000 meters, change the angle of the attack and throttle back to 30%. Adjust your climb angle to make sure speed is still increasing whilst the height increases too. This will allow you to travel to 5000 plus meters without burning much of your preciouses rocket fuel. This fuel, you will need for later in the battle. Once you have hit 5000 meters, throttle back to 14% and continue to climb and adjust your climb angle again to roughly 16 degrees. You can continue to climb at this angle until you see it fit not to do so.

The key to descending without locking up and crashing is, not to point your nose straight down unlike other aircrafts, the BI is able to gain a lot of speed even in a little descent. When, the BI speed starts going over 700 Km/h pull up slowly and lose it, when you push the nose back down push the rudder all the way to the left or right. If you aren't losing speed fast enough, shift the plane 45 degrees to the left or right, with full rudder movements. This will slow you down.

Due to the BI being able to go over 900 Km/h with ease and locks up at Mach 0.76, descending from height from 5000 meters needs to be calculated based on the battle conditions in the match. If you descend to fast, due to a high angle of attack, you will lock up and crash into the ground, because you will be unable to pull out in time.

The BI is similar to the He 162 A-2 - small amounts of fuel and ammo (low flight endurance) but has astonishing performance, being able to climb 80 degrees vertically. As such it excels in the interceptor role, climbing at a extremely high rate of up to 116.4 meters per second in AB and 100.0 meters per second in RB. Able to shoot down bombers and fighter bombers before exhausting the fuel supply and landing again. Don't be rused by its acceleration into thinking it has a high top speed - the wings and elevators will lock up at mach speed: 0.76 Thus making any manoeuvres and climbs impossible. Flying full throttle at 8000 Meters, will see you rip your wings off in level flight.

The enemy fighter, may see you sneaking on him or her, they will bank left or right, do not follow them in the turn, the BI cannot turn fight with out losing it's advantageous speed. Instead, disengage, throttle up, climb and come back around for another pass.

To land the bi, you need to keep about 5 to 10 seconds of fuel in case you need to go around due to a missed approach. When on approach, you will need to lose speed fast, which it can do. This is due to the BI not using the sleek low profile aerodynamic wings, as you find on other jets. However, to do this, you must reduce the speed down to under 420 km/h or your gear will be ripped off making the odds of crashing on landing very high.

To land the BI, flip the plane on it's side, use the rudder during the turns to help cause more fiction with the air, which will start reducing it's speed. Due to the shape of the BI which features great guilder aerodynamics, it is able to fly at high speeds and keep the momentum even without any throttle being active. As soon as the BI touches the ground, apply the breaks and turn the rudder hard left and right to help slow it down.

Landing on short runways, should be avoided or risk crashing at the end, the reason for this if you come into fast or high the BI will bonce, it will bonce to 150 meters or more. Ideally you should head back to the main airfield which has the long landing strip to land on.

Most unusual aircraft discusses the BI at 3:44 - War Thunder Official Channel
A BI... to fly - Napalmratte
The Shooting Range #218 - Metal Beasts section at 00:28 discusses the BI.