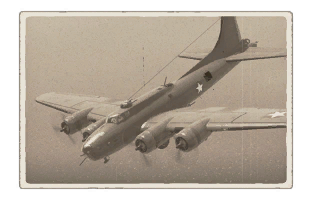 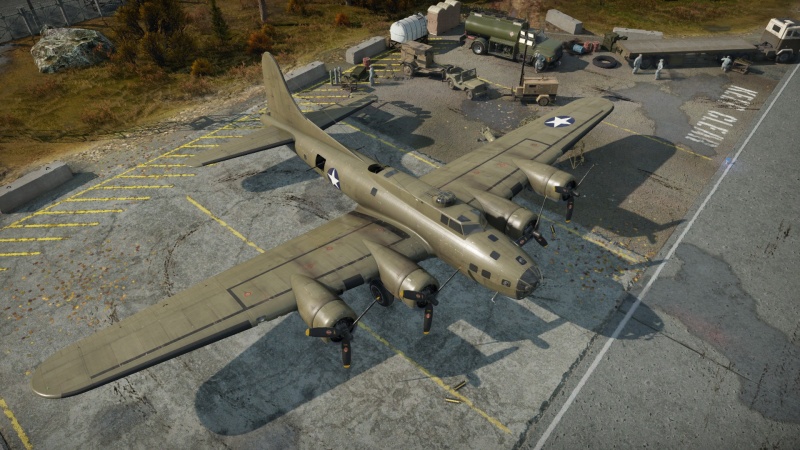 Unlike the preceding variant of the B-17, the B-17E/Late sports the Sperry Ball turret on the belly of the aircraft, thus ensuring complete protection of the belly of the aircraft. However, you still have the main drawback as the preceding B-17E: the lack of nose defences. While you do have .30 calibre guns on the nose, it is relatively inadequate at the battle rating, and nearly worthless in an uptier. On the other hand, this model of the B-17 does have more armour than its predecessors.

The B-17E/L can be outfitted with the following ordnance:

When using the B-17E/Late Flying Fortress, you are not invincible, but the B-17 is notorious for being able to take one serious punch and still get you home. However, at your battle rating, you aren't going to have too much room for error. Nonetheless, as mentioned earlier, you have minimal nose defences which leave the pilot and co-pilot dangerously exposed.

If you have the payload capability to destroy multiple bases, the first part to enhance your survival is one word: climb. You already start at the "Long Range Bombers" spawn, which is roughly at 4,500 m (14,763 ft). A sustained climb can put you at nearly 5,500 m (18,044 ft) in a matter of around a minute and a half. From there, maintain speed and a sustained climb to help put you out of reach of interceptors to buy you some time.

If you are under attack from enemy fighters/interceptors, Do not attempt to use evasive manoeuvres - you are mainly unmanoeuvrable to begin with and trying to pull evasive manoeuvres will bleed the speed, throw off your gunner's aim and possibly increase your chances of losing a vital control component.

At your battle rating, it is very possible that you will be tiered, where almost any plane will tear you to shreds.

If the enemy is approaching directly towards you around 1 km, fire your turrets in the general direction of the enemy in small bursts, to get a feel for the aiming and to serve as warning shots.

German Aircraft - When facing the Germans, especially at the higher battle ratings, you will be vulnerable to the "Minengeschoß" rounds, which will punch through your armour, and explode inside the aircraft. The most dangerous opponents are going to be the Fw 190 D and any of the Focke Wulf Ta-152s, mainly due to their heavy-hitting weaponry. In addition, you also are confronted by the Bf 109 K-4, which has a 30 mm cannon through the propeller hub, which can make short work of you with a number of well-placed hits.

Soviet Aircraft - When facing Soviet planes, you have to pay close attention to any plane bearing the prefix "Yak". You especially need to pay attention to the Yak-9P and the Yak-9UT, which have a mix of 20 mm cannons and a combination of either a 37 mm cannon or a 45 mm cannon. The sheer size of the cannons they wield can obliterate the B-17 with just one or two well-placed hits. Another aircraft to pay attention to is the La-11, which has three 23 mm cannons that can land serious damage if the hits are placed well.

British Aircraft - While it is mainly uncommon to see one at high altitude, a Wyvern S4 has the capability to intercept you thanks to its extremely powerful engine. In addition, a Wyvern will cut you to shreds as a result of the four 20 mm Mk.V Hispano cannons. In addition, the Hornet will also have the capability to intercept you. Perhaps the biggest threats lie with the Griffon Spitfires, especially the Mk. 22 and Mk. 24 variants. Also, keep your eyes peeled for the Tempest fighters.

Japanese Aircraft - The Ki-87 is probably the single greatest threat to you at mid-rank battles due to the hard-hitting weaponry and its turboprop engine. In addition, (unlikely as it could be), the J7W will obliterate your plane due to the four 30 mm cannons in the nose. If not taken care of quickly, later models of the A7M "Reppu" can dispatch you if they have a good enough aim.

Repeat after me and take the time to memorize the following text: "Do not tail a B-17," even if you are flying something as heavily armed as a Messerschmitt 410 or a later Focke-Wulf 190 model. This just warrants either an engine fire, your aircraft being critically damaged, or even your pilot being knocked out. If you have the altitude advantage over a B-17, try to hit it from an angle, which can increase your chances of survival. The weakest point on a B-17E from a defensive standpoint is from the nose of the aircraft. This is due to only a .30 calibre machine gun defending the pilot and the co-pilot. If you do not have the capability to engage the B-17E from the nose, and you find yourself tailing a B-17E, aim for the wings of the bomber. This may allow you to set some of the fuel tanks on fire or even better yet shear one off.

For German planes, your Minengeschoß rounds give you a slight advantage, given your shells' ability to explode inside the bomber causing more extensive damage to the control surfaces. If a B-17E is present in a Battle Rating 6.7 match, they pose a lesser threat than something like the B-17G, which has only .50 cals but try not to tail a B-17E, as they still can punch through you if the .50 cals have the "Armoured targets" belts.

The later rest of the B-17E production run featured a Sperry ball turret at the ventral position. The Bendix had disappointing results, and so it was replaced by the Sperry manned ball turret instead. These B-17Es are called the B-17E/L in War Thunder, for B-17E Late.