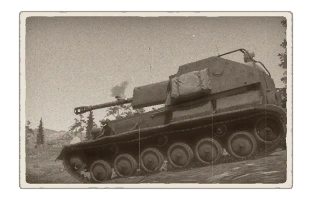 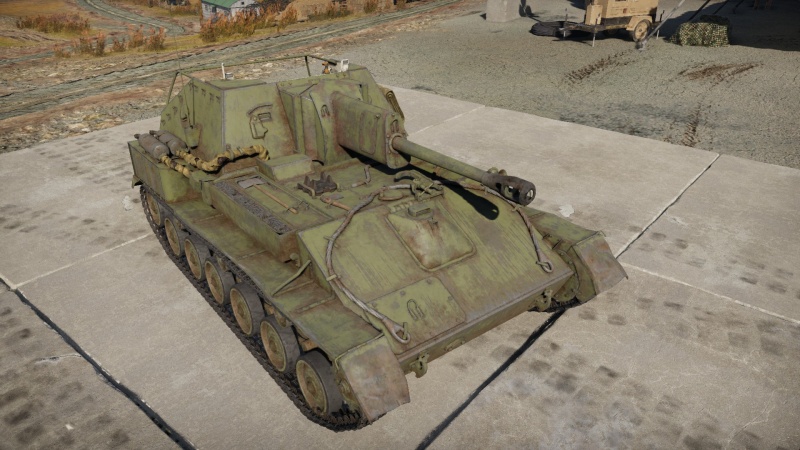 The SU-76M shares a similar hull armour profile with the T-70 light tank on which it is based. The hull, with a large, well-angled 25 mm upper front plate, might bounce some shells when the hull is angled, but high-penetrating guns such as 5 cm Kwk 39 can still penetrate it easily. Once penetrated the driver will get knocked out, or the transmission/engine will be broken, immobilising the tank. On the back of the hull, the SU-76M has a lightly armoured open-topped superstructure to accommodate the 76 mm gun. With a maximum thickness of only 25 mm and poor angling, the superstructure will not stop much more than heavy machine gun fire. Common tanks such as Pz.II, M3A3, AB 41, etc are all able to penetrate the front of the fighting compartment with ease, and knock out any crew in the shell path. The crews are quite cramped together too, further decreasing the survivability against explosive-filled rounds. It is only able to resist rifle-calibre rounds or heavy machine gun fire from far away.

The open top also makes the SU-76M very vulnerable to aircraft strafing runs from above or behind, so be careful.

The SU-76M has an adequate top speed of about 30 km/h. It does have a good power/weight ratio, giving it nice acceleration. Its tracks are short and far apart, allowing it to traverse the hull relatively easy. Considering how lightly armoured it is, however, this mobility does not seem that good. It also has a poor reverse speed of only 5 km/h which can sometimes prevent the player from retreating to safety, putting the player at great risk. The tracks are very narrow, resulting in very sluggish movement and acceleration in snowy, sandy or muddy maps. Generally the SU-76 will fall behind common tanks such as M3A3 Stuart, Pz.IV C, A13, etc. Therefore, with this level of mobility, the SU-76 is limited to a short-range defensive tank destroyer that should only go to where it is needed, and cannot afford to constantly perform long-range cross-country manoeuvres.

The SU-76M is armed with the 76 mm ZiS-3 field gun, a versatile artillery piece that is also capable of performing in the anti-tank role. It has a decent rate-of-fire, a wide traverse arc, and the ability to one-shot most enemies at your BR, but the mounting has very poor gun depression due to the rearward placement of the superstructure.

It has a very wide-selection of ammunition, though only a few are worth using regularly. The stock BR-350A APHEBC shell is adequate enough for most purposes, although it will struggle against heavy tanks like the Churchill at long ranges. The BR-350B APHEBC shell is arguably the best all-round projectile available, combining decent penetration with excellent lethality. Against particularly heavy armour, the BR-354P APCR shot is available, though its poor lethality and performance against sloped armour will tend to disappoint. The BR-350SP APBC shot is a solid shot round with no filler, but it creates more spalling than the APCR and is somewhat more lethal. The BP-353A HEAT round is occasionally useful for long-range fighting since it does not lose penetration with distance, but the Soviet 76 mm guns generally do not perform very well at long range, and work better at medium to close range. The Sh-354T shrapnel round creates a lot of fragments when it penetrates, but is only effective against lighter vehicles.

Like most turretless tank destroyers, the SU-76M needs to be handled with care. Not only does it not have a rotating turret, it is also lightly armoured, has an open top, and practically no protection from behind. The crew is quite exposed to air and rear attacks, which can disable them with even machine gun fire.

The SU-76M lacks the speed to perform daring flanking manoeuvres or quickly take control of key locations. Unlike the high penetration 57 mm ZiS-2 gun on the preceding LVT(A)(4), the 76 mm ZiS-3 tends to struggle at long range, but it far outperforms the 57 mm gun in terms of lethality when using the APHEBC rounds, capable of creating havoc on the battlefield, the SU-76M needs to be handled with care.

Not only does it not have a rotating turret, it has an open top and practically no protection from behind. Therefore, when an engagement's complexity evolves and the Su-76 is surrounded, there is little that can be done to survive. One well placed hit to its rear will knock out a good part of the exposed crew, even machine guns can do the job of eliminating both loader and gunner.

It is crucial to remain at a distance from the enemy, perhaps even seek the cover of trees for protection against low-level attack aircraft, and to only ever give the front side to an enemy. The fact that this vehicle does not have a turret not only means that it is not effective when fighting more mobile enemies attempting to flank, it also means that placing the armour at an angle is not a viable strategy to increase relative armour thickness and stay more protected, since the gun's limits for horizontal traverse mean that any significant angle of the hull towards an enemy will make make it harder to keep the enemy in sight. What can be done is to fire a shot and, immediately after, angle the hull whilst reloading, to then return to facing the enemy to fire another shot. However, hiding whilst reloading is the most sensible choice.

Unfortunately, the SU-76 has low mobility, handling, and a vastly different gun. However, the gun on the SU-76 is definitely more powerful than the 57 mm. The sheer force of the 76 mm shells will cause huge amounts of trauma to a target upon penetration. Given its poor gun depression and velocity, the SU-76 should be used as a mobile brawler and ambusher. It is well suited to performing ambushes in urban areas. The high HE filler of the 76 mm shell makes it capable of knocking nearly all enemy armour with a single shot at its 2.3 BR. A minor issue with the SU-76 is that it has no defensive machine gun, meaning that responding quickly to SPAA is difficult.

The main gun is the one and only aspect that makes the SU-76M a great vehicle, while its performance in other areas are far from satisfactory. The wide range of available ammunition is a particular interesting aspect for this SPG, its APCR and HEAT shells actually being lethal even against higher BR tanks, empowering this tank destroyer to obliterate more advanced tanks like the Tiger H1 with accurate shots. Recently, a varied late-war BR-350B ammunition has been added to the SU-76M's ammo choices. It incorporates more penetration and a better fuze as a trade-off for than some degree less explosive filler. Despite this, the SU-76M will consistently destroy most if not all enemies in one shot when the shells go through. Once unlocked, the SU-76 is excellent at knocking out any tank from the front with a single shot, but note that there sometimes may be a need to utilise other ammunition types to effectively engage different target types. For instance, against common light/medium tanks (eg. Chi-Ha Kai, Pz.III, Crusader), the explosive-packed AP shells are very sufficient, whereas against a tougher target (eg. B1, M4A3 (105)), the more-penetrative APCR (BR-354P) might become helpful.

The way to Korea

In October 1950, the Chinese People's Volunteer Army began to fight in North Korea. The 13th Corps of the Volunteer Army, which was the first troop to go abroad to fight the UN Army, and the following 9th Corps were mainly made up of infantry units. In October 1950, the 6th Guards Mechanized Army of the Soviet Transbaikal Military Region formed 10 tank self-propelled artillery regiments, each of which was equipped with 30 T-34s, 6 IS-2s and 30 SU-76Ms. In November, these 10 regiments entered China and handed over their equipment to help PLA in forming 3 tank divisions, 3 independent tank regiments, and 1 tank training base. This was the first time that the Chinese People's Volunteer Army ever had access to Soviet-made medium tanks and self-propelled guns.

A total number of 704 SU-76M self-propelled guns were delivered to the Volunteer Army since 1951, forming about 30 self-propelled artillery regiments. Since the situation on the Korean battlefield had entered a stage of stalemate of two sides at that time, most of the tanks and self-propelled guns equipped by the Volunteer Army were mainly involved in infantry support missions. During these fire missions, the PVA realized that the 76 mm cannon of the SU-76M was not powerful enough to undertake the fire support mission. Therefore, in the latter part of the war, infantry support missions were mostly undertaken by ISU-122s and SU-152s, while the anti-tank missions carried out by SU-76M were handed over to SU-100s.

SU-76M served in the Chinese People's Liberation Army until the 1980s. The Army still retained self-propelled artillery regiments equipped with SU-76M in 1979. It is worth mentioning that in 1960, Beijing Institute of Technology established a special militia division, and the students recovered a batch of tanks, including SU-76M, in the school. These recovered vehicles were equipped to a tank regiment of the university militia division.

China seized a Soviet T-62 medium tank after the Incident of Damansky Island in 1969. In response to the threat of Soviet offensive, China made a number of exterior models based on the appearance of the T-62 for military and militia organizations for anti-tank practices. The popular Chinese "SU-76M Gai" is a teaching model made up of a scrap SU-76M hull and an imitated T-62 turret, rather than the so-called prototype of the 59-16 tank.

(The Incident of Damansky Island is known as Self-defense and Counterattack in Zhen Bao Island in China, that seized T-62 is the well-known T-62 No.545.)