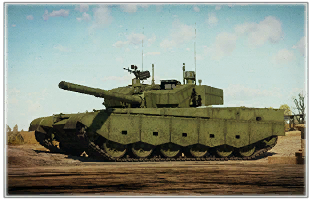 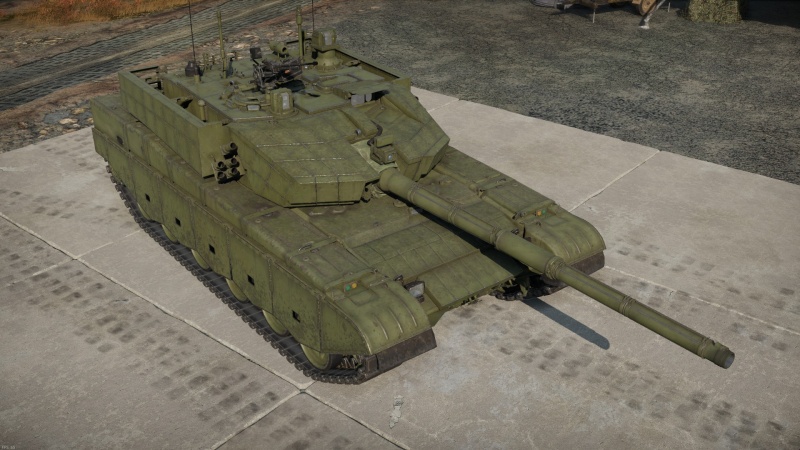 One of the most advanced PLAGF MBT and the second-newest PLAGF tank (the latest is ZTQ15) in service, the ZTZ99A ditches the Warsaw Pact-style low profile design and opts for a larger turret and a new powerpack, while retaining similar protection to the preceding ZTZ99-III. With all the new features found on ZTZ99A, players can finally make good use of the latest Chinese technologies on tanks to take out enemies with its surprisingly good mobility.

Though it shares the number 99 in its name, the ZTZ99A in fact has very little technological relationship to previous ZTZ99s. The ZTZ99A has a completely new design with a higher overall profile to previous tanks comparable to NATO tanks. It features an arrow-shaped composite armour block and new FY-5 ERA with up to 250 mm KE protection covering the turret. In case of top-down missiles, the new FY-1D1 ERA covering the top of turret can mitigate some of the damage. But as for the hull, since the design requirement was for equivalent protection to previous ZTZ99s, aside from the UFP armour itself, there's only FY-4 covering the UFP as well as the sides of the turret.

Another major difference is that the driver is moved to the right side of the hull (from the enemy's perspective), if opponents aren't able differentiate between the 99A and other 99s, it is very likely that shots hitting the UFP will prove fruitless. To say at least, aside from the headlights on the UFP, LFP and the mantlet, the ZTZ99A will have a better protection at its frontal arc than its predecessors.

The efforts of Chinese armoured vehicle designers in the first decade of 21st century have finally ripened - ZTZ99A sports a new powerpack consists of the NORINCO Shaanxi 12V150HB-1 diesel engine and CH1000 transmission. With 1500 hp power output when spaded and having a DCT transmission, it is the fastest MBT in the game at 75 km/h and has a -34 km/h reverse; unprecedented for any Warsaw Pact or Chinese tank. The new transmission also makes ZTZ99A a huge but nimble tank in terms of its turning radius, and vastly improves its reaction time to enemies or in case of a quick retreat.

125 mm Type 99A cannon
Two-plane stabilizer
Reduces the swing of the gun in two planes while moving
Autoloader
Automatically feeds projectiles into the breech. The speed does not depend on the skills of the loader
Ammunition39 rounds
First-order22 rounds
Reload7.1 s
Vertical guidance-5° / 13°
Main article: Type 99A (125 mm)

The new ZPT99A gun on ZTZ99A is similar to previous ZPT98 gun, both gun share very similar characteristics with high muzzle velocity, straight ballistics, and feature an autoloader. Although the turret traverse speed hinders some of its combat capabilities, it is certainly an improvement to previous tanks.

The stock DTP-125 HEAT-FS round has the typical penetration of 480 mm shared by Western MBTs with 120 mm guns, but this is not enough to deal with tanks with composite armour, which are the norm at top tiers. The post-penetration damage is also disappointing. Only use it as an interim shell before APFSDS is unlocked. With 2.19 kg of explosive mass, it is sometimes capable of knocking out light targets like SPAAs and light tanks with overpressure damage, so keep an eye out for those.

The stock DTB-125 HE shell is one of the strongest of any top-rank MBT. It can actually cause more damage to MBTs than the HEAT-FS round if fired at turret rings, hull roofs, and turret cupolas, due to overpressure damage. Well placed impacts have a good chance of transmitting the shockwave into the crew compartment and knocking the target out instantly, even against the toughest MBTs like the Strv 122A. It helps to keep a few HE rounds around even after APFSDS is unlocked as they excel at causing pressure damage to light targets.

DTB12-125 is also available as a tier 4 modification; this is one of the few HE-VT shells available for a top-tier MBT. This shell turns ZTZ99A into a 125 mm anti-aircraft gun thanks to its generous explosive filler, any aircraft that are within its 7 m trigger radius will not have a good day. Although it has lesser explosive content, the VT fuse is not triggered by ground vehicles so it can serve as an alternative for the stock HE-FS as well

The 125-I APFSDS round is a tier 1 modification. Though it first appeared on the ZTZ96, it is still used by the latest ZTZ99A and eases the stock grind considerably. It has very similar flat penetration and superior angled penetration to the 3BM42 "Mango" round used by Soviet tanks and can penetrate most contemporary opponents through at least the lower front plate and gun breech.

Waiting as a tier 4 modification is the DTC10-125 APFSDS round, a high mass and high velocity shell with only slightly worse performance compared to 3BM60 on the T-80BVM. This will be the go-to round for the ZTZ99A and most targets at the rank are unlikely to withstand a penetrating shot from this shell.

The ZTZ99A also has access to the GP125 tandem ATGM, which performs identically to its Soviet counterpart. If players find their darts are not effective against well-armoured targets, the sufficient velocity and penetration can ruin the day of such vehicles, as well as helicopters if they don't evade the incoming missile.

Like its predecessors, to ensure the best survivability, only bring 23 shells at your disposal (22 in autoloader and 1 preloaded shell); any more shells will have to be moved into the autoloader before being able to fire and significantly increase the risk of ammunition cook-off in case of any penetrating shots.

As the spearhead of the current PLAGF armoured corps, thanks to the vastly improved mobility compared to its predecessors and new technologies intergrated onto ZTZ99A, it has better handling than its predecessors and is comparable to NATO vehicles in terms of its power-to-weight ratio and top speed. The newly designed tank also has very similar protection to its predecessors while parts of its turrets are replaced by brand new FY-5 ERA blocks and the top is covered by FY-1DA ERA blocks, improving its survivability against top-down attacks. However, the mantlet is still lightly protected compared to other MBTs at its rank, a penetrating shot is now even more likely to cause a breech knockout or even lethal damage to the gun crews. In terms of the hull, although it was remarked to have the protection of a ZTZ99 and the driver has been moved to the left side, the age-old problem of a huge LPF and less protected area over the driver can certainly ruin a player's day at top tier. So it is better to keep the ZTZ99A away from heated battlefields or make sure to cover the LFP and mantlet as much as possible. In case of complicated terrains, either avoid them or quickly dig for cover with the dozer blade modification.

In the firepower department, ZTZ99A also comes with a wide variety of shells; the darts, although having somewhat below average penetration, are overall still sufficient enough to knock-out most western vehicles aside from Strv 122; when facing Russians though, in case players are not confident in the darts, the GP125 tandem ATGM is an alternative to melt through Russian MBTs. While both HE shells seemed similar, the stock DTB-125 is still among the most hard-hitting HE shell at top tier while the new DTB12-125 is a VT shell, meaning that any aircraft that comes close to its 7 m triggering range will have a very bad day thanks to its explosive content. So bringing a variety of shells is viable to make the ZTZ99A more versatile or sometimes have the capability to deliver a last-ditch strike back.

As the previous WZ123/ZTZ99 program had been certified, the Central Military Commission only deemed ZTZ99s as the placeholder before their ultimate aim - a 3rd generation MBT - was achieved. Soon after the first batches of ZTZ99-III rolled off the production line, the new designer, Mao Ming (毛明) of Institute 201 took over from his mentor Zhu Yusheng (祝榆生) and started on his new design of MBT - WZ1001.

The earliest known prototypes consisted of 3 WZ1001s which had different designs: the first was based on a ZTZ99, installing a brand new turret and reworking the rear side of the chassis to fit a new power pack; the second one looked similar to what the certified WZ1001 would be; while the third installed an experimental 125 mm L/54 gun based on the former. These prototypes were first spotted in 2006 and their efforts for a new tank were then certified in 2010, thus named ZTZ10 then ZTZ99A due to unknown reasons.

The earliest batches of the pre-production run ZTZ99As were spotted in the early 2010s equipping an experimental millimeter-wave IFF radar, known simply as New MBT (新型主战坦克) or by the erroneous name ZTZ99A2 (or 99大改) to observers. The debate of the name settled down when it was first shown during the 70th V-J Day Parade in Beijing as the TJ1XX column during the parade; as later batches started to be manufactured in 2016, those in 90th PLA Day Parade at Zhurihe Base (朱日和基地; a Fort Owen-like exercise ground for PLA troops) and during the 70th National Day Parade had slightly different designs with the removal of the aforementioned MMW radar.

The ZTZ99A is a further development of the ZTZ99 MBT, already familiar to seasoned War Thunder tankers and fans of Chinese ground vehicles in the game. However, despite sharing a common chassis, the ZTZ99A can be considered a completely new vehicle thanks to a near complete overhaul of its design, particularly concerning its turret. Unlike previous variants, the ZTZ99A features a new arrow-shaped turret, fitted with state-of-the-art ERA and composite armour, capable of defeating even tandem charge chemical rounds.

While the protection upgrade did result in the vehicle gaining roughly 4 tons in weight over its immediate predecessor, this drawback is amply compensated by the ZTZ99A receiving a new 1,500 horsepower diesel engine. As a result, the vehicle's power-to-weight ratio increases to an impressive 27.7 hp/t despite the weight increase! As a result, the ZTZ99A actually outmatches its predecessors in terms of mobility, being able to attain a top speed of 75 km/h on paved roads. Furthermore, a new transmission eliminates the poor reverse speed of the older modifications with the ZTZ99A now being capable of reaching up to 34 km/h while going in reverse. Quite a handy upgrade for intense gun fights, eh?

Unlike its protection and mobility, the ZTZ99A's firepower however remains virtually unchanged from previous versions. The vehicle still features the familiar ZPT-98 125 mm smoothbore cannon as well as a coaxial 7.62 mm machine gun and a top-mounted high-caliber commander's machine gun. Therefore, the ZTZ99A inherits its predecessors' excellent firepower and combines it with its own upgrades to result in a potent new fighting vehicle, worthy of the top spot in the Chinese ground forces tree.