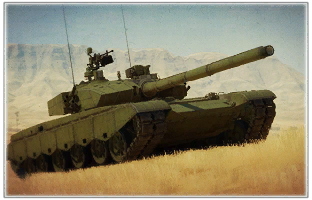 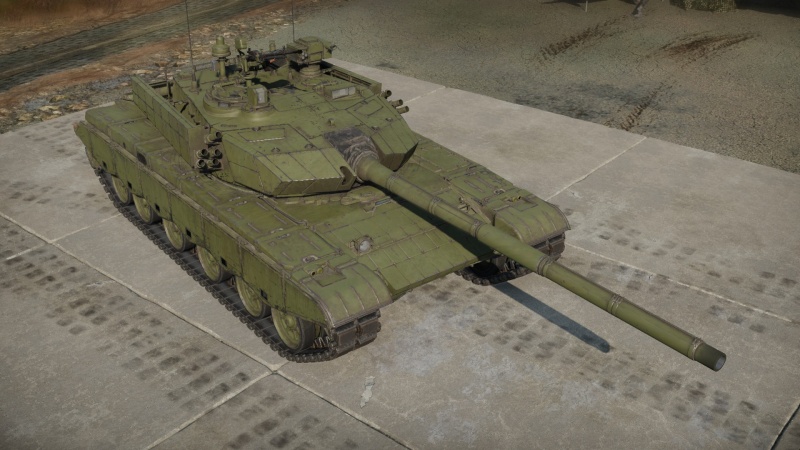 An overhaul upgrade of the older ZTZ99-II, the ZTZ99-III (Stage 3) retained the same firepower, sufficient mobility and tough frontal armour while eliminating some of the design flaws in the previous design. It might not be the top-notch MBT to be utilized, but the ZTZ99-III still provides a reliable top-tier lineup for the Chinese tech tree and a valuable upgrade for its older brother.

The major difference between the ZTZ99-II and III is the placement of ERA blocks up the front and side of the turret, where a wave board is presented on Stage III's UFP to deflect water waves in case for river crossing operations; the turret is also redesigned into a welded one, eliminating the bulged part of the turret and thus increasing the survivability of the turret crew. But unfortunately, some flaws still existed in Stage III.

Like the T-80U, the ZTZ99-III continues to use both composite armour and advanced ERA with kinetic protection. Composite armour is present on the turret cheeks and on the upper glacis; it is unremarkable by itself, but the areas with full coverage of both composite armour and FY-4 ERA are even capable of resisting the Leopard 2A6's DM53 APFSDS. Unfortunately, these areas are limited to the turret cheeks and lower portion of the upper glacis. Interestingly, the ERA is resistant to tandem-charge warheads, which allows it to withstand ATGMs that other ERA equipped vehicles can't.

There are plenty of weak spots on the hull. First, the lower glacis has no composite armour or ERA whatsoever and can be penetrated by practically anything, and it also is proportionally larger than on Soviet MBTs. Penetrating shots there have a large chance of detonating the ammo in the autoloader and destroying the tank. The upper glacis composite armour is modeled with a large cutout for the driver's optics, as on the Soviet T-64/72 series, and even the FY-4 ERA there is not enough to save it from powerful APFSDS. Some small portions of the upper glacis are not covered by ERA either.

The turret has its fair share of weak spots as well. The gun mantlet area has no composite armour and penetrating shots will usually take out the gun breech and possibly a crew member. There is a cutout in the ERA array on the left cheek to allow the driver to enter and exit the tank that reduces the protection there. Thanks for the redesign of the new turret, the ZTZ99-III eliminated the bulged, cast part of the turret and thus increasing the survivability of the turret crew; it might still be penetrated by some shells but those are in rare cases.

The ZTZ99-III does not have any ERA on the hull sides and the base hull side armour of 50 mm is thinner than Soviet MBTs, so be careful of IFVs with autocannons. Successful hits to the side will usually total the tank, either detonating the ammo racks or knocking out the turret crew.

The ZTZ99-III's armour protection has enough gaps that it can be considered "trolly" as opposed to "well-protected", but the areas that are well-protected are very strong. It's best to stay at long range and utilize the ZTZ99-III's low profile in conjunction with cover to make it difficult for enemies to hit the weak spots. Putting some bushes near the driver's hatch or gun mantlet might help. Remember that ERA is destroyed upon absorbing fire and the composite armour alone does not have sufficient protection for a top-tier vehicle.

As a last note, the GL-7 laser dazzler is physically modeled on the left side of the turret roof as a laser rangefinder, but its countermeasuring capabilities are not implemented.

The ZTZ99-III's mobility is still below average for a top rank vehicle. Although it has a sizeable 1,200 horsepower NORINCO Shaanxi Diesel 12V150HB diesel engine, which is comparable to the T-80U's 1,250 hp gas turbine engine and among the most powerful Eastern Blog diesel engines. The tank itself also weighs more than 50 tons, which approaches the weight of the Leopard 2A4 and M1 Abrams. Among contemporaries, the power-to-weight ratio is better than the Challenger 2 and comparable to the Ariete PSO or T-72B3. Though it is quite fast in a straight line, it does need a considerably long time to pick up speed especially when stock or across rough terrain. It also does not have neutral steering due to the design of transmission, and the reverse speed of -5 km/h is truly abysmal. The ZTZ99-III can get into battle reasonably quickly but does not excel at flanking and will struggle to retreat from sticky situations.

125 mm ZPT98 cannon
Two-plane stabilizer
Reduces the swing of the gun in two planes while moving
Autoloader
Automatically feeds projectiles into the breech. The speed does not depend on the skills of the loader
Ammunition39 rounds
First-order22 rounds
Reload7.1 s
Vertical guidance-5° / 13°
Main article: ZPT98 (125 mm)

The ZPT98 cannon is a 125 mm smoothbore cannon with an autoloader, much like the 2A46 cannon used by the T-72 or the Type 88C cannon used by the ZTZ96, but it is 50 calibres long instead of 48. The reload speed of 7.1 seconds is the slowest of any top-rank vehicle, so destroying or crippling enemies in one shot is important. The gun handling is the same as the ZTZ96 series, being slightly better than most Soviet MBTs barring the T-72B3 but still lower than most Western MBTs.

Since the ZTZ99-III is an upgraded ZTZ99-II with some redesigned appearance but not in terms of firepower, both share the same ammunition.

The stock DTP-125 HEATFS round has the typical penetration of 480 mm shared by Western MBTs with 120 mm guns, but this is not enough to deal with tanks with composite armour, which are the norm at the ZTZ99's battle rating. The post-penetration damage is also disappointing. Only use it as an interim shell before APFSDS is unlocked. With 2.19 kg of explosive mass, it is sometimes capable of knocking out light targets like SPAAs and light tanks with overpressure damage, so keep an eye out for those.

The stock DTB-125 HE shell is one of the strongest of any top-rank MBT. It can actually cause more damage to MBTs than the HEATFS round if fired at turret rings, hull roofs, and turret cupolas, especially with overpressure damage. Well-placed impacts have a good chance of transmitting the shockwave into the crew compartment and knocking the target out instantly, even against the toughest MBTs like the Leopard 2A6. It helps to keep a few HE rounds around even after APFSDS is unlocked as they excel at causing pressure damage to light targets.

The ZTZ99-III also has access to the GP125 tandem ATGM, which performs identically to its Soviet counterpart. If players find their darts are not effective against well-armoured targets, the sufficient velocity and penetration can ruin the day of such vehicles, as well as helicopters if they don't evade the incoming missile.

The 125-I APFSDS round is a Tier 1 modification. Though it first appeared on the ZTZ96, it is still a decent option for the ZTZ99 and eases the stock grind considerably. It has very similar flat penetration and superior angled penetration to the 3BM42 "Mango" round used by Soviet tanks and can penetrate most contemporary opponents through at least the lower front plate and gun breech.

Waiting as a tier 4 modification is the DTC10-125 APFSDS round, a high mass and high velocity shell with only slightly worse performance compared to 3BM60 on the T-80BVM. This will be the go-to round for the ZTZ99-II and most targets at the rank are unlikely to withstand a penetrating shot from this shell.

DTB12-125 is also available as a tier 4 modification; this is one of the few HE-VT shells available for a top-tier MBT. This shell turns ZTZ99-II into a 125 mm anti-aircraft gun thanks to its generous explosive filler, any aircraft that are within its 7 m trigger radius will not have a good day. Although it has lesser explosive content, the VT fuse is not triggered by ground vehicles so it can serve as an alternative to the stock HE-FS as well.

Same as the ZTZ99-II, Stage III has both a turret HMG and coaxial LMG; the HMG can be used in case of any potential low-flyers and helicopters which are too close to your proximity, it can do short work of them, this also applies to any poorly armoured light vehicles in higher ranks as these ceramic core shots can shatter them with relative ease.

While the coaxial gun is only good for range-finding and disturbing enemies, it can also do short work of any exposed crew or sometimes even surprise kill on helicopters.

Since there weren't any firepower improvements between ZTZ99 Stage II and Stage III, the playstyle of ZTZ99-III is very similar to its predecessor.

The ZTZ99's main weaknesses are poor mobility characteristics and inconsistent protection, so to mitigate these, it is best used as a sniper or midfielder. Carefully move up to positions that offer cover and a good view. Once in position, the ZTZ99's strengths can be put to good use. The laser warning system and high-quality thermal sights for the commander give the ZTZ99 a large degree of situational awareness, allowing enemies to be spotted and engaged quickly. Try to attack enemies from a distance and while they are in the open, the variable 6x-11x gun sight will help in searching for targets at longer ranges; in this situation they will have difficulty targeting the weak points of the ZTZ99 while the ZTZ99 typically only needs to shoot their hull when using the top DTC10-125 APFSDS. The DTB12-125 HE-VT and GP125 tandem ATGM are also at your disposal in case of any incoming aircraft or more sturdy targets. Be aware of the slow reload, which is up to 50% slower than other top MBTs. If a target is still capable of returning fire after being hit (e.g. gunner, gun breech, turret drive are intact), it might be better to move to cover and wait for teammates to distract or attack them. Although the ZTZ99 has a sufficient top speed, it is not among the top-notch at top rank; it might struggle especially in urban environments when changing position or flanking enemies. Move up when the coast is clear but do not overextend, it is difficult to back out from a bad position due to the bad reverse speed.

After the commission of ZTZ99-II (WZ123 or ZTZ99 Mod. 2003, 99一期改, ZTZ99 "二类定型状态" in game; erroneously known as 99G), Factory 617 kept on revising the design and eliminated some of its design flaws, such as replacing the bulged cast turret with a brand new welded turret, as well as re-positioning the existing applique armour of turret front and lengthening the side ones; the UFP was also redesigned to fit FY-4 in a more reasonable positioning. It was then finalized just a year later and in the 60th Anniversary of the Establishment of PRC in 2009, the new ZTZ99-III (WZ123B or ZTZ99 Mod. 2004, 99二期改, ZTZ99 "三类定型状态" in game; erroneously known as 99A1) showed up as the leading column of vehicle phalanx (numbered 01-01 to 01-18 from 334th Regiment, 112th Mechanized Infantry Brigade, 38th Army Corps), serving as the new spearhead of PLAGF elite armoured brigades.

Eventually, just a year later; a titular successor of ZTZ99-III - the completely redesigned ZTZ99A (WZ1001; erroneously known as 99A2), passed state certification and in mid-2010s, it started to replace ZTZ99-III as the most advanced vehicle of PLAGF and served in elite armoured brigades in Northeastern China.