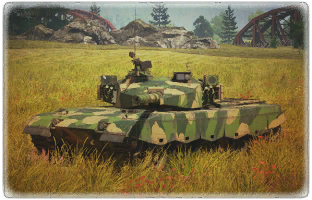 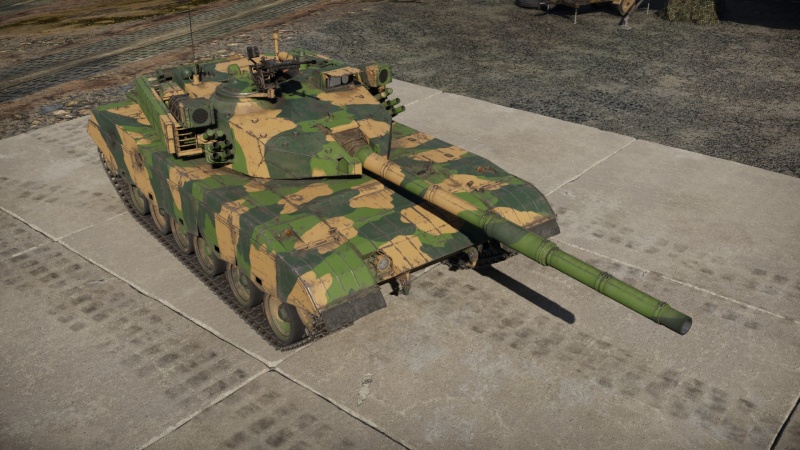 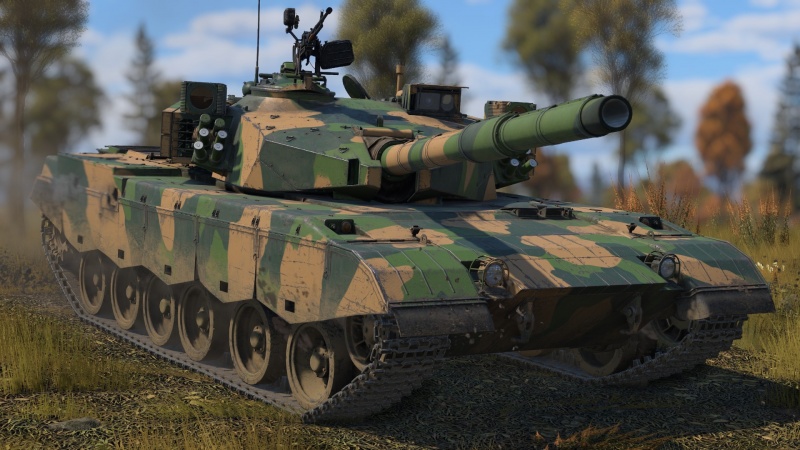 The ZTZ96A, Prototype is a premium gift rank VI Chinese medium tank with a battle rating of 9.7 (AB/RB/SB). It was introduced in Update "Wind of Change".

The ZTZ96A (P) is a prototype of the ZTZ96A. It has a different turret armour arrangement from the serial production version: instead of the arrowhead-shaped ERA mount, it has high-hardness spaced armour in an interesting "needle-nose" shape reminiscent of the Chieftain's profile. But the main selling point is the soft-kill APS system consisting of two JD-3 jammers mounted on the turret sides, which function similarly to the T-90A's "Shtora" and are a first for Chinese ground vehicles. This prototype trades some turret protection in exchange for the ability to disrupt the guidance of enemy ATGMs. In all other respects the ZTZ96A (P) is practically identical to the production version, with thermal sights and a powerful gun, and makes a good partner for a lineup. (If passed for certification, it would have been coded WZ122R like its tech-tree competitor).

This tank, the failed bid for the ZTZ96A, shares the same chassis of its tech tree counterpart, having the same LFP with little to no protection while the UFP is among one of the strongest at its tier thanks to the FY-4 ERA blocks. The turret is another story - this prototype has an oddly shaped wedge mounted on the front of turret, so players can tell this tank apart from the main tree one right away. The pair of wedges does provide sufficient protection against kinetic or chemical shells at similar tier, though this only applies to the part in front of the turret but not the area in front of the mantlet - this part has only 340 mm RHA equivalent protection so it will be penetrated with ease. Another note is that the wedges don't provide full protection, and they should not be angled as this will decrease the protection severely.

The internal design of this prototype is identical to the ZTZ96A so the crew of 3 and its ammo carousel sit at the very same place on both tanks, a penetrated shot up front will either knock down either of the crews or set off the carousel and sent the turret sky high.

In fact, both ZTZ96A prototypes installed a JD-3 IR jammer during testing; while the production run canceled this design, this prototype still retained the pair of jammers, giving it some chance of jamming missiles that use laser guidance.

Since one of the major upgrades of the ZTZ96A is the engine, it was upgraded to a NORINCO 12150ZLD 800 hp engine; the ZTZ96A (P) is no exception. Although it might not have the overall mobility of NATO tanks, the power/weight ratio (at 18.6 hp/t) is higher than most Soviet tanks, giving a better handling.

125 mm Type 88C cannon
Two-plane stabilizer
Reduces the swing of the gun in two planes while moving
Autoloader
Automatically feeds projectiles into the breech. The speed does not depend on the skills of the loader
Ammunition40 rounds
First-order22 rounds
Reload7.1 s
Vertical guidance-5° / 12°
Main article: Type 88C (125 mm)

The ZTZ96A (P) inherited the same 125 mm ZPT88C cannon from ZTZ96, which is one of the best tank cannons at its tier; both the prototype and production tanks share the same traits - high velocity shells, sufficient turret traverse speed and the same autoloader with fixed 7.1 second reload between shots.

All three ZTZ96s in-game share the same shells so players from the main tech tree ones will soon find themselves home; since this is a premium tank, all the ammunition comes unlocked with the tank.

The first ammunition is DTP-125 HEATFS, sharing the same penetration of NATO 120 mm HEATFS while having the mass of Warsaw Pact 125 mm HEATFS. Since ERA is commonplace at this tier, this round is best used against enemies showing their sides or light targets - its explosive mass is sufficient to knock them out right away.

The second ammunition, DTB-125 HEFS, is infamous for its explosive mass at nearly 5.5 kg, which is still the highest among any explosive rounds of all MBTs; as a research paper from NORINCO suggested that DTB-125 is suited for knocking enemies down with its explosive mass, this also applies to any enemies you might face at similar tiers - a precise hit to weakspots that trigger overpressure damage can send even the toughest enemies straight back to the hangar with ease, let alone light vehicles. In case of sniping hiding enemies or needing a quick knock-out on light vehicles, bringing some HEFS is viable.

The third ammunition is the 125-I dart. Thanks to its high velocity, it can penetrate 466 mm at point-blank range; the sheer penetration is more than enough to finish most NATO or Warsaw Pact tanks with very few exceptions. This would be the go to shell for the ZTZ96A (P).

Since the ZTZ96A prototype shares the same chassis of the mass-production version, the protection all-round is identical to the ZTZ96A. The LFP will be the greatest concern players might have during gameplay; the relatively large LFP doesn't have enough protection against common shell types at its tier, and a penetration will certainly lead to a crew knock-out or detonation of ammunition, so keep it hidden as much as possible. Meanwhile, the UFP has blocks of FY-4 ERA that provide up to 500 mm protection at certain angles, making it one of the toughest MBTs at its tier in this regard; the blocks are one-off protection however so beware of subsequent shots on unprotected areas. As for the turret, the design of applique armour provides similar protection to the ZTZ96A against shells at this tier, but the overall design is flawed where the lower part of the wedge block and areas in front of the mantlet provide lesser protection. Aside from that, any angling of turret will result in easy penetration of the applique armour since the angling cancels out the frontal arc protection, so do keep your turret aiming at enemies.

The overall playstyle is very similar to that of a ZTZ96A, it might not have the best mobility at this tier, but it can still keep up with the main forces with its 800 hp engine; your UFP and turret is your best friend, misplaced shots from the enemies are very likely do nothing on the ZTZ96A (P) while your gun can do lethal damage to enemies thanks to its penetration and autoloader. Rushing with the ZTZ96A (P) could be fatal due to its lesser flexibility to retreat back to cover with a slow reverse at barely 5 km/h, planning ahead before assaulting enemies is the key. Thanks to the JD-3 jammer on the sides of the turret, some missiles that are in the way of your turret frontal arc will find it impossible to do any harm to you; do keep in mind that this only applies to SACLOS missiles, wire-guided or beam-riding missiles can still do lethal damage since those are not affected by the jammer.

The overall information on this failed design on upgrading the later ZTZ96s with new appliqué armour was minimal; both ZTZ96A (WZ122R) were designed in the early 2000s in view of an upgrade scheme for later ZTZ96s in production line. While both tanks retained the same firepower and mobility, as well as a pair of Shtora-1-like IR jammers known as JD-3 developed domestically on the side of the turret (some suggest that JD-3 was based on the Ukrainian's Shtora-1 equivalent model of IR jammer), they have a very different turret designs, where this design has a pair of wedge blocks of appliqué armour in the front of the turret.

(Note: the trio of ZTZ96/96A/96B couldn't be upgraded from one another due to design differences and costs)

Due to unknown reasons, this design failed the bid for PLAGF and the later ZTZ96A/WZ122R became what is today's standard, with an arrow-shaped turret like those on ZTZ99-II and the IR jammer removed, likely for cost reductions.