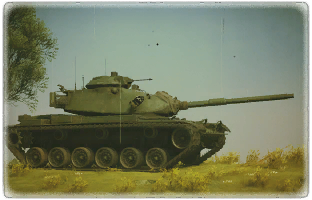 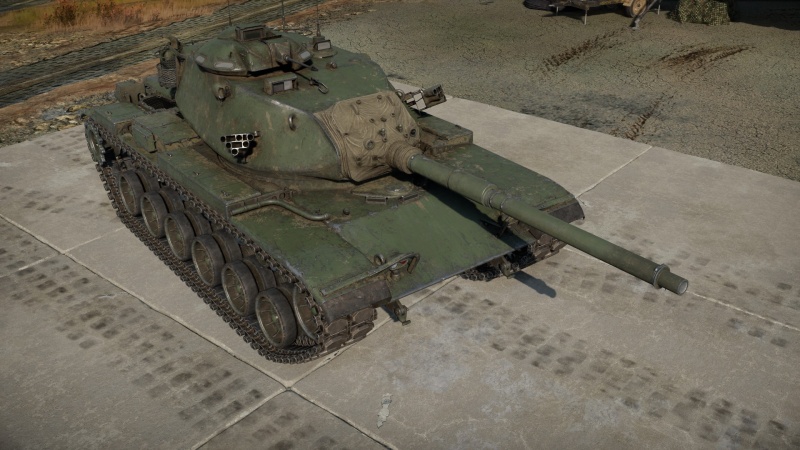 As with the previous M48A1, this M60A3 is a US medium tank operated by Taiwan. It boasts thermal sights, a two-plane stabilizer, good gun handling, and a wide selection of ammunition. It does suffer from a large profile, average mobility, and inadequate protection, but the M60A3 TTS is by and large a reliable tank that complements the contemporary ZTZ59D1 quite well.

Succeeding the M60A3 is the CM11, which uses the same hull but boasts better chemical protection and firepower.

The base armour layout of the M60A3 TTS is the same as the M60A1 RISE (P). Unlike the US version, it does not have ERA panels, making chemical munitions a large threat.

The armour is similar to the layout originally featured on the M60A1 (AOS). It consists entirely of cast and rolled homogeneous armour. The frontal hull armour and turret cheeks are fairly thick and can generally shrug off fire from Soviet APHE rounds and autocannons. The large volumetric gun mantlet has impressive thickness at some points and may be able to shrug off APDS rounds at times, though the majority of APFSDS rounds will go through. When the turret is pointed directly at a threat, the turret cheeks are also surprisingly strong against kinetic rounds. The turret ring is a notable weak zone, only 114 mm thick and fairly large in size. The commander's cupola bulges from the top of the turret and is lightly protected, making it an attractive target for APHE and high-calibre HE rounds.

With only steel armour, the M60A3's protection should not be trusted. Considering the tank's unimpressive mobility, enemy flankers are a real concern as well, and nearly every weapon at the M60A3's rank can penetrate the hull sides as well. It is practically naked against chemical or subcalibre munitions, so avoiding hits is paramount.

The M60A3 TTS's mobility is unimpressive. The power-to-weight and reverse speed are only slightly better than the ZTZ59D1 and pale in comparison to the Leopard A1A1 or OF-40 Mk.2A. Do not expect to arrive on the battlefield before others and be careful not to overextend. It does have neutral steering and can turn in place, which may be a nice bonus for players used to driving Soviet/PRC tanks.

The M60A3 TTS is equipped with a 105 mm M68 rifled gun functionally identical to the ubiquitous Royal Ordnance L7. Although the gun itself is essentially the same as the ZTZ59D1's, the M60 platform offers a significantly faster reload, faster gun handling, and vastly improved gun depression. Fighting on hilly terrain is much easier and swinging the turret around during close range combat is not such a struggle.

The stock M728 APDS has unimpressive flat penetration but good angled penetration, actually beating out a few APFSDS rounds. It works decently against most opponents but might struggle to finish off vehicles with large volumes or extremely thin armour due to the concentrated post-penetration damage. Players used to the Type 59 or Type 69 will be happy to know that M728 can consistently penetrate the upper glacis of the M60A1 (AOS) and M60A1 RISE (P). The M456 HEATFS penetrates 400 mm of RHA at any distance and will have no issue enemies with steel armour. Unfortunately, it will often detonate upon impact with bushes or fences and the post-penetration damage can be inconsistent. Enemy tanks equipped with ERA like the M60A1 RISE (P) are almost frontally immune to it. The M393A2 HESH round generates a wide but shallow spray of spalling upon impact and might be useful on occasion against lightly armoured vehicles, but it has poor ballistics and is generally not worth it in normal combat.

The M735 APFSDS round is the best all-purpose offering. It improves upon the APDS round in all aspects and there are few enemies at the M60A3 TTS's rank that can resist it. The angled penetration tops out at about 160 mm at 60 degrees, which is less than the ~190 mm at 60 degrees offered by the ZTZ59D1's APFSDS, but this will typically not be a problem unless uptiered against Soviet MBTs. 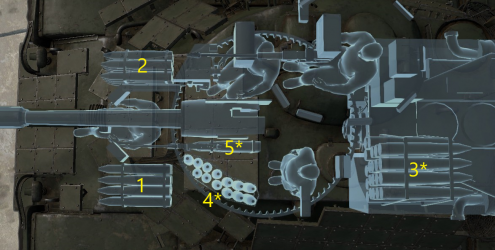 The M60A3 TTS lacks the mobility to arrive first on the front lines or easily flank, but the unimpressive protection means that advancing steadily in the open is not a safe proposition either. It does not have ERA like its US counterpart and is even more vulnerable to enemy chemical munitions. Still, the turret can bounce incoming fire on occasion and it enjoys good gun handling relative to other tanks in the Chinese tech tree, so it is more suited to peeking over hills or brawling in urban combat than the ZTZ59D1, which has less than half the gun depression and turret rotation speed.

It is best to follow teammates, stay close to cover, and take advantage of the thermal sight to scan for opponents. Large pieces of cover such as buildings or geographic features will compensate for the M60A3's large size and shorter pieces of cover might allow the M60A3 to peek its gun over while obstructing most of the tank. A quick glance through the gunner's scope can reveal hidden enemies from afar. The armour and mobility issues are less important if one can consistently catch targets off guard and shoot first, and if the rest of the team is causing a ruckus, all the better. Keep an eye out for flankers and avoid staying out of cover for long. The M60A3 has thinner side armour than the ZTZ59D1 and all IFV autocannons can penetrate it.

Helicopters are common at the M60A3's battle rating. The M60A3 will be easily destroyed by ATGMs and rockets since it has no dedicated HEAT protection, and it is also quite easy to spot from afar due to its large size. Smoke grenades can be helpful if caught in the open and in an emergency the commander's heavy machine gun can be used along with the main gun to harass nearby helicopters.

Overall, the M60A3 TTS is a no-frills tank that can perform well in almost any situation. It does not have any special features or outstanding strengths, but the combination of decent APFSDS, thermal sights, and good gun handling at a battle rating of 8.7 is a nice and relaxing package. The ZTZ59D1 has a more powerful APFSDS round, a lower profile, and potentially better protection but will often be let down by its abysmal gun handling and slow reload. The two tanks work well for laid-back players who prefer to hang back instead of aggressively rushing.

The August 17 Communiqué (The Announcement by China and the United States on Solving the Issue of US Arms Sales to Taiwan) signed by the CCP and the United States restricted the United States' sales of military equipment to Taiwan not exceeding the technology level of the 1980s. At that time, it was not possible for the ROC army to equip with new American-made MBTs in the close future. However, in August 1994, the US government agreed to sell 160 second-hand M60A3TTS main battle tanks to Taiwan, and in May 1996 approved the contract for a second batch of additional 300 tanks. These M60A3TTS MBTs were delivered around the 1996 Taiwan Strait Missile Crisis, and this move undoubtedly contained the CCP's further attempts to invade Taiwan by force.

In view of the fact that the combat effectiveness of M60A3 main battle tanks is way inferior to their opponents serving in People's Liberation Army, the Academia Sinica in Taiwan planned to carry out a series of upgrades for the M60A3 tanks in service in 2016. The upgrade project included the installation of a devastating M256 120 mm smoothbore cannon, replacement of the fire control system, and upgrade of power components. According to the plan, a total of 300 M60A3/CM11 tanks should receive such upgrades to coordinate with the M1A2T "Abrams" MBTs sold by the United States. However, the upgrade program was too expensive for the Army to afford (the program was expected to cost 100 million NT$ each, which is even more expensive than purchasing a brand-new M1A1 Abrams MBT), the Army turned to seek a plan to extend the service life of them. The Army Ordnance Industry Development Center of the Joint Logistics Command planned to purchase a batch of new engines to replace the AVDS-1790-2 air-cooled diesel engines that would soon be discontinued from production. These modified M60A3 tanks would be equipped by units in northern Taiwan, and coordinating with the US-aided M1A2T "Abrams" MBTs to defend Taipei.