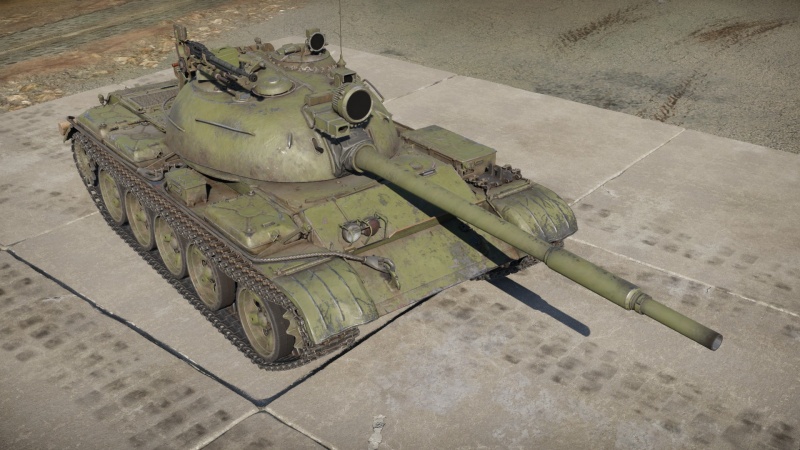 At first glance, the Type 69 looks a lot like the previous Type 59. Closer inspection reveals some interesting features. It can be visually differentiated from similar vehicles by the placement of the IR spotlight directly above the gun mantlet (Soviet tanks place the spotlight off to the side), a laser rangefinder next to it, and a unique fume extractor located near the tip of the barrel. It can be thought of as a cross between the Soviet T-55A and T-62. Like the former, it boasts improved mobility and gun handling from the original Type 59, and like the latter, it has a smoothbore gun firing HEATFS and APFSDS rounds. Incorporating some of the PRC's first indigenous technologies, it also boasts night vision, two-plane stabilizer, and a laser rangefinder which both the T-62 and T-55A lack.

Players coming from the Type 59 will appreciate many of the Type 69's improvements, no longer having to deal with a glacial turret rotation speed, single plane stabilizer, and lack of night vision. The firepower is a sidegrade at best and a downgrade at worst. Both tanks can use HEATFS, but while the Type 59 could use APHE rounds for instant knockouts against lightly armoured tanks like the Leopard 1, the Type 69 has a poor-quality APFSDS round instead. No miracles should be expected from its gun.

Succeeding the Type 69 is the ZTZ59D1, which has much improved firepower and protection but reverts back to the Type 59's poor gun handling and weaker engine.

The armour layout of the Type 69 is identical to the T-54 (1951), with a rounded turret made of cast homogeneous armour and a highly sloped front glacis. While the frontal protection is good in terms of raw values, the Type 69 will face many tanks with powerful sub-calibre and HEAT rounds that can penetrate its armour with ease. That said, it is resistant to the APHE rounds used by Soviet light/medium tanks and the US T32/T32E1.

The Type 69 is armed with a 100 mm Type 69 smoothbore cannon equipped with a two-plane stabilizer, capable of firing APFSDS, HEATFS, and HE rounds. It reloads 0.1 seconds quicker than the Type 59's rifled gun but this is a negligible improvement. The turret traverse is on par with the T-55A and is 50% better than the Type 59. The ability to automatically range the gun using the laser rangefinder helps offset the lower velocity of the HEATFS round, and makes sniping extremely easy. As a whole, the Type 69 significantly rectifies the Type 59's gun handling problems, but it still lags behind most Western MBTs. It also retains the T-54/Type 59's poor gun depression of 4 degrees, which is 1 degree worse than the T-55A.

The Type 69's stock rounds are the 1-72-85 APFSDS and the 1-71-74 HE. The APFSDS was at one point the worst round of its type in War Thunder; 220 mm of flat penetration at 10 m is worse than many AP/APHE rounds. The AUBL/74 HVG's 60 mm APFSDS penetrates more despite having a much lower calibre! It also suffers noticeable drop-off at long distances. However the angled penetration is decent, topping out at 127 mm @ 60 degrees. For comparison, the T-55A's 3BM25 APFSDS round has far superior flat penetration (up to 335 mm) but only has slightly higher angled penetration (up to 129 mm @ 60 degrees) than the 1-72-85. Penetration aside, it has a high muzzle velocity of 1505 m/s. The post-penetration damage is nothing to write home about, generally comparable to the Type 1959 APDS used by the Type 59. Be sure to aim for crew members and ammo racks.

The 1-71-74 HE shell is weak and should be ignored. It has a low explosive content and might be able to cause overpressure damage to light targets, but not consistently. Any vehicle with more than paper-thin armour will be immune to it.

The unlockable Type 1973 HEATFS is a Tier I modification. Familiar to Type 59 users, it has the same penetration performance as the T-55A's 3BK17M HEATFS with a lower TNT equivalent and a slightly lower muzzle velocity. 390 mm of flat penetration at any distance is impressive and will slice through almost all tanks lacking special armour types (spaced, reactive, composite). While it lacks the high velocity of the APFSDS and can be detonated by bushes or fences, the HEATFS is still good for dealing with heavy targets that the APFSDS can't penetrate. Post-penetration damage is somewhat inconsistent, so again, aim for crew members and ammo racks. It is capable of knocking out very lightly-armoured vehicles with overpressure damage, but this is not guaranteed. Still, it is much more practical than the HE shell and is the best accompaniment to the APFSDS. 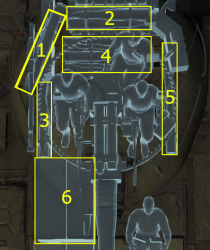 Ammo racks of the Type 69

The Type 69 is somewhat paradoxical. Its laser rangefinder and smoothbore cannon may suggest that it is a good sniper, but the poor penetration of its 1-72-85 APFSDS makes it difficult to pick off well-protected targets from afar. Meanwhile its two-plane stabilizer, improved engine, and faster turret rotation speed are more suitable for an offensive role, though it lacks the APHE enjoyed by the comparable T-55A for instant knockouts. New tankers can try using it as a second-line midfielder to support pushes and quickly react to targets from a comfortable distance. It can brawl quite well against tanks that lack stabilizers. Take advantage of the laser rangefinder to shoot accurately at long distances, as the ability to automatically range the gun helps a lot.

Terrible APFSDS is still APFSDS, and it does the job against against lightly armoured opponents like the Leopard I and AMX-30. US medium tanks tend to have better frontal protection and may be able to shrug off the APFSDS in certain zones; the M48A1 has a tough gun mantlet, the M60's lower glacis is immune, and the T95E1 is mostly immune on the turret and upper portions of the glacis. When fighting more resilient targets like the M103, T32E1, and M60A1 (AOS), the Type 1973 HEATFS is a much better choice and will penetrate any target with conventional armour. The Type 69 may encounter some tanks that boast ERA and good base armour. Look out for the Centurion Mk.5 AVRE, M60A1 RISE (P), and Sho't Kal Dalet, which will need repeated hits with HEATFS and are more easily dealt with by flanking.

The APFSDS and HEATFS are not very likely to destroy targets in one shot, especially those with large volumes and well-spaced crew members, so stay close to cover and have a backup plan if a target survives. This is especially important since the Type 69's reload is rather sluggish and a damaged target could retreat or retaliate before a follow up shot is ready.

Mobility wise, the Type 69 is about the same as the T-55A. While not agonizing, it most likely won't be the first tank to arrive on the battlefield. Note that the reverse speed of -7 km/h is rather poor and it lacks neutral steering, so be careful about overextending. It is easier to get into a bad position than out of it.

Overall, the Type 69 is versatile, having tools for most situations at hand and no major weaknesses, though conversely it is not exceptional in any regard. It is best used as a flexible combatant, capable of flanking, pushing aggressively, or sniping as the situation demands. Stay close to teammates and avoid engaging multiple opponents at the same time. Caution should be paid to its substandard mobility, slow reload, and finicky ammunition.

After the Sino-Soviet split, the People's Republic of China was no longer able to receive military technical help from the Soviet Union. The Type 59, a licensed copy of the T-54A, was the most advanced medium tank available to the PLA, but after a few years it became apparent that upgrades were necessary to keep up with the rapidly advancing technology of the time. The PLA ordered the development of a new "Type 69" tank in 1963 and the first prototype was manufactured in 1966; however, the beginning of the Cultural Revolution in 1966 and the ensuing purges impeded further development of the tank. The early Type 69 featured a smoothbore cannon, IR searchlight, laser rangefinder, and a new engine.

After the capture of a Soviet T-62, the latest Soviet technology was examined, copied, and implemented into the Type 69, creating the Type 69-I variant. During this time the smoothbore gun was found to be rather unsatisfactory, and Type 69 tanks in Chinese service were often refitted with the same 100 mm rifled gun as the Type 59. Further development continued through the 1980s, culminating in the Type 79 series, which incorporated a new 105 mm gun and numerous Western technologies.

The Type 69 series saw relatively limited service with the PLA but were more popular on the export market, purchased by countries such as Thailand, Bangladesh, and Myanmar. Modified Type 69 tanks were still in the inventory of the Iraqi Army during the 2003 invasion of Iraq, though by this point they were no match for modern MBTs. That being said, the Iraqi division equipped with the Type 69 tanks, though outgunned, fought more valiantly than the elite Republican Guard who had access to more modern equipment.