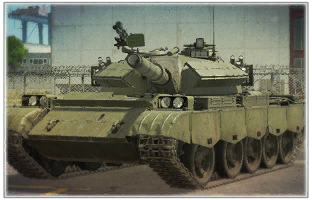 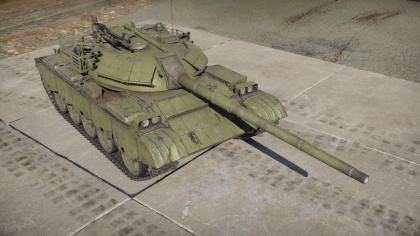 The Medium Tank T-69 II G is a premium gift rank VI Chinese medium tank with a battle rating of 8.7 (AB/RB/SB). It was introduced in Update "Starfighters".

An improved derivative of the Type 69, the T-69 II G is one of many Chinese tanks hailing from the lineage of the original Type 59, itself a version of the Soviet T-54. The vehicle represented in War Thunder is an early version of the II G as initially exported to Bangladesh. While this one lacks the more well-known upgrades (e.g. thermal sights, 850 hp engine) later applied to it in Bangladeshi service, it still has a few tricks up its sleeve and makes a good accompaniment to the similar ZTZ59D1.

The armour layout of the T-69 II G is very similar to the ZTZ59D1. The base armour underneath the ERA is exactly the same as the original T-54 (1951). The turret ERA setup is identical to the 59D1, but the hull ERA setup differs. The coverage is better, no longer having gaps around the tow cable attachment points, but there is no longer any notable kinetic protection. These differences are relatively minor and unlikely to cause significant changes in gameplay.

Post-penetration survivability is still not great, but the ammo rack next to the driver at least features wet storage like the Type 69. The tank is cramped and penetrating hits are likely to take out more than one crew member. When the turret is pointed forwards, the driver, gunner, and commander are all lined up and can be knocked out by a single penetrating hull shot.

The T-69 II G retains the same 580 horsepower engine as the Type 69. Surprisingly, the upgrades only added a half ton of weight, so the overall mobility is more or less identical and an improvement over the sluggish ZTZ59D1 in terms of power-to-weight. The reverse speed of -7 km/h is still poor and the tank cannot turn in place, so mobility is not a strong suit of this tank. It can still arrive at the battlefield reasonably quickly, but other speedy 8.7 tanks like the Leopard A1A1 will arrive first.

The ZPL94 cannon is an upgraded version of the Type 83 cannon used by the ZTZ59D1, featuring a noticeably longer barrel. This improves the muzzle velocity of its ammunition, and the APFSDS penetration is increased slightly as a result. Unusually, it also has a faster reload than the 59D1's cannon by about 1 second, which is a welcome improvement.

The -4° gun depression might look too poor, but due to the low height of the vehicle it is actually enough for quite some not-so-hilly terrains. On gentle hills the T-69 can peek over safely, exposing only the turret for hull down, for example certain spots in Jungle and Frozen Pass. However, this gun depression is still not great in very hilly maps like Karelia, forcing the player to ditch the hull down tactic.

The APFSDS round should be the primary choice of ammunition (if ammo costs are not a concern) as it has the highest muzzle velocity and is the most reliable. The HEATFS round may have more penetration on paper, but quite a few contemporary tanks have spaced, reactive, or even composite armour that can lessen its effectiveness or stop it entirely. Even against plain steel armour, the extra penetration compared to the APFSDS round is often overkill. It can also be prematurely detonated by bushes and fences. The HESH round has destructive post-penetration effects at the cost of awful ballistics and low penetration, in addition to being soundly countered by the aforementioned special armour types. The HEATFS and HESH rounds are capable of causing hull-breaks on lightly armoured targets due to their explosive content.

New to the Chinese arsenal is the DTB-1 HE-VT round. It has a proximity fuse against air targets, similar to the M830A1 round available to the M1A2 Abrams. The fuse only activates after 500 meters of travel distance and has a trigger radius of 15 meters. Since the T-69 II G does not have particularly good gun handling and the 825 m/s muzzle velocity is rather low, the DTB-1 is best used against enemy helicopters as opposed to jet aircraft. Note that one-shot knock-outs are rare even against unarmoured helicopters and it has little to no utility against armoured ground targets. That said, it is still an explosive round, so in a pinch it can be fired at SPAAs and wheeled light tanks to hull-break them. Oddly enough, it has a harder time hull-breaking targets than the HEATFS round despite having more explosive mass. 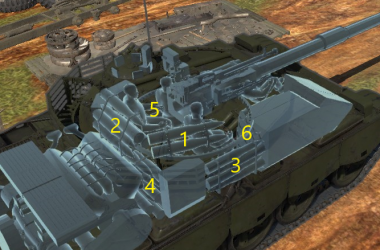 As mentioned before, the T-69 II G's ammo storage is not very tidy. Taking 38 rounds or less will empty the turret, which prevents turret penetrations from being fatal. Taking 20 rounds or less will empty the fighting compartment, leaving up to 19 rounds in the first-stage "wet" ammo rack (#6 in the diagram) next to the driver and 1 inside of the gun. This is the safest configuration, but emptying the fighting compartment completely is less of a concern since hull penetrations will typically cause a lot of damage to the T-69 regardless due to its cramped nature. Still, do not take more ammunition than necessary.

Main articles: DShK (12.7 mm), SGMT (7.62 mm)
The T-69 features two MGs: one roof-mounted 12.7mm heavy MG, and a 7.62mm coaxial MG. The 12.7mm MG, with its maximum penetration of around 30mm, can do quite well against poorly armored vehicles such as the R3 T20 / T106, and the AUBL 74. It can also damage or even destroy the opponent's gun barrel or track with around 5 seconds of continuous fire. Against low-flying aircraft it can easily get you some critical hits with the correct lead. However its magazine empties very quickly and it does not carry enough ammo for prolonged MG fire comparing to the infamous M2HB.

The 7.62mm, on the other hand, can only damage fully exposed crew which are not commonly seen at this BR, or clear up light obstacles. Its low penetration greatly limits its usage in battles.

The T-69 II G is best played as a midfielder. It is better for close to medium range combat than the ZTZ59D1, since the mobility is noticeably better and the turret rotation speed is literally twice as good (20 deg/s max vs. 10 deg/s max). Rushing headfirst into combat is still not optimal since it lags behind in these two parameters compared to Leopards, AMX-30s, or Type 74s. On the other hand, the lack of a thermal sight makes long distance sniping more difficult than with the 59D1.

Since there are contemporary thermal-equipped tanks available in the Chinese tree (the M60A3 TTS and ZTZ59D1), the T-69 II G is a good choice for a first spawn. It fares better in aggressive combat than these two tanks, which tends to happen in the earlier stages of the battle. At the start of a match, for safety reasons, follow behind speedy teammates when rushing a cap point and let them draw some fire, then locate the opponents and deliver some powerful APFSDS to them. The reason to do so is because there are always faster opponents (eg. Type 74G, Kpz 70, Leopard 1, etc) who do not cap the point first, rather they set up ambush next to a point and target whoever is coming, for example in complex maps like Cargo Port or Sweden. If you lead the rush, you will be their first victim. In the event that the T-69 is the fastest tank on the team, go for caps and keep a careful eye for enemies that might already be there or arrive shortly. Otherwise, the T-69 is a fairly rounded tank, so there are not many special strategies for it in particular. Always be on the lookout for speedy tanks like the Radkampfwagen 90, which may pop out of nowhere with little warning. If the T-69 is destroyed, the M60A3 and ZTZ59D1 are good choices to switch to laid-back sniping. Be cautious when using this tank in night battles; there are enough thermal-equipped tanks at its rank that getting sniped from across the map by hidden enemies is a common occurrence, and the T-69 cannot really take a hit.

Since the T-69 is a premium tank, HE-VT rounds are available from the start and don't need to be unlocked. Look out for helicopters; players spawning in helicopters at the start of the game are mostly limited to unguided rockets for anti-tank usage. The T-69's ERA can eat up a few glancing rockets and a lucky hit from a HE-VT shell can cripple a helicopter, though multiple hits are typically required to finish the job. Do not expect to survive ATGMs, and if one is fired at the T-69, try to destroy it with machine guns. Get used to the ballistics of the round and try to place it as close as possible to the target. If the round is triggered at the edge of the proximity fuse radius, it may not do any damage at all. It also helps to stay a bit behind the front lines and/or take advantage of hills since the gun elevation angles on this tank are not the greatest. Lastly, remember that this tank has a heavy machine gun, which will do good supplemental damage against lightly armoured helicopters.

The Type 69 was intended as an improved version of the Type 59. It featured a more powerful engine, two-plane stabilizer, night vision systems, and a 100 mm smoothbore gun, and production vehicles benefited from some technology reverse-engineered from a captured Soviet T-62. However, the Chinese military was not very satisfied with the initial Type 69 variants and only used them in small numbers.

The Type 69-II variant was ready by 1982. The main improvements were to the fire control system. The original Type 69 100 mm smoothbore gun, which was found to be rather underwhelming, was replaced with the Type 59's 100 mm cannon while retaining the stabilizer. Other differences included turret storage racks and side skirts. While the 69-II did not find much domestic use either, it was a success on the export market, being used extensively by Iraq, Pakistan, and other customers.

The Type 69-IIG was an export variant for Bangladesh. While background information about it is rather sparse, it featured a 105 mm ZPL94 cannon and a new gunner's sight that combined the day/night viewing modes and laser rangefinder. After entering Bangladeshi service, it was upgraded with a wide variety of new features, including third generation ERA protection, thermal imaging sights, gun-launched ATGM capability, and a much more powerful 850 hp engine. It continues to serve in the Bangladesh Army to the present day alongside several other Chinese export tanks, including the Type 59 and VT-1/Al-Khalid.