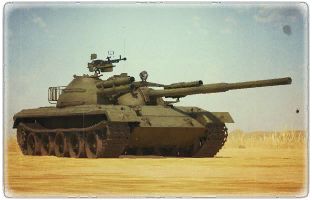 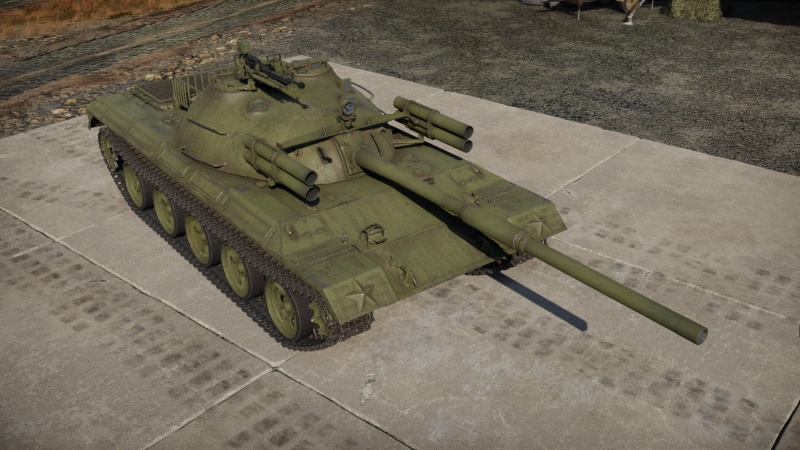 The Object 122 Medium Tank "Mechanical Controls" is a squadron rank VI Chinese medium tank with a battle rating of 8.3 (AB/RB/SB). It was introduced during Update "Danger Zone".

Also known to the Chinese community as the 三机样车 ("triple-mechanical" prototype; mechanical suspension, transmission and control), it was the Chinese attempt to build new MBT during the heat of Sino-Soviet conflicts with their latest technology available. This version of 122MT introduced the very first 120 mm smoothbore gun in the world as well as a new ATGM welded onto the turret for extra firepower, as well as sporting their latest FCS with laser rangefinder and new diesel engine.

At longer distance, 122TM looks exactly like any other Warsaw Pact or Chinese tanks in early Cold War with its iconic oval shape cast turret and sloped chassis; but in 122TM's case, it has higher slope angle at 67° that gives it more protection against late APCBC shells, while the turret itself is slight thinner than T-54s/Type 59. The sides look somewhat similar to a Leopard 1 with sloped plates that gives 122TM slightly higher protection on the sides, but the lower plate is the same 80 mm flat, it could stop autocannons from a distance (around 500 m and above), but do not expect it can do miracle at close quarter brawling.

An important aspect of 122TM is the overall upgrade on mobility, therefore Weifang Diesel developed a new 8V160 engine for the tank with higher output at 650 hp. It might not sound much against NATO tanks, but its design also makes sure the overall mobility is sufficient to move around at higher acceleration against Warsaw Pact tanks- which is the main enemy proposed by the engineers.

Based on the 115 mm U-5TS gun captured on Soviet T-62, Chinese engineers up-gunned the cannon into a stabilized 120 mm smoothbore cannon with automatic ballistic solution thanks to its laser rangefinder; although the overall gun handling is similar to a WZ120 (Type 59) or a T-62, the larger cannon with varieties of shells will make sure it can make short work of enemies at its rank.

Thanks to its higher gun pressure and the development of new shells, 122MT also has a few varieties of shells at disposal.

The 120-I is among one of the stock shells for the tank, due to the fact that it was a steel core dart and statically similar to Soviet 3BM4, although being labeled an APFSDS, it might sometimes have problem facing tanks with rounded hull such as American M48 Patton series or Object 279; but in most cases it is sufficient to defeat most tanks at its rank.

The 120-HE is another stock shell for it as well, although the caliber might sound tempting and does has slightly higher mass and penetration from 3OF11, but the explosive content and penetration also means that only light vehicles or SPAAG will have a bad day facing this HE shell; well-armored targets are likely immune to it unless being hit from gun ports (overpressure) while some NATO tanks also have chances of being blasted by the shell from the roof.

The first researchable shell is the 120-II, a tungsten rod APFSDS; thanks to its tungsten core, it has higher flat penetration from its stock counterpart and performs similarly in terms of damage but also trades sloped penetration; it will have problem facing Soviet tanks at uptier.

The final shell awaits the 120-HEAT, performs similarly to 3BK4 but at slightly higher velocity and mass; but like many HEATFS of the era, it might face ERA or composite armor and do very little on them, as well as its jet stream doesn't have as much spalling as darts. Optionally this can replace HE shells and take it as a way to defeat light vehicles. 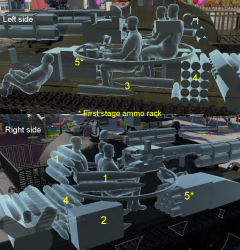 A unique feature of 122MT is the 2 pairs of 302 ATGMs welded onto the turret; as the ancestor of the later HJ-8 missiles, although it might not have the highest penetration and speed among ATGMs at its rank, 4 ATGMs can make sure most enemies will not have the chance to retaliate or in case players do not feel confident with its gun.

Although it has a slightly different DShK (Type 54) design with an anti-aircraft reticle, the overall performance of it is identical to any other DShK which is good for gunning down light vehicles or helicopters that get too close.

At first glance, some players might consider it as a reverse-engineered T-62 of Mainland China with 4 tubes welded next to the turrets; but as soon as they read the statcard, there are some major differences, namely the gun at 120 mm and those tubes are in fact ATGMs. The overall playstyle of 122MT is very similar to T-62 or previous T-54/55 family aside from the overall mobility being better thanks to the upgraded 650 hp engine; the steep slope on the UFP also helps it for a slightly better protection against full-caliber kinetic rounds from late WWII or early Cold War tanks; even if players are not confident with the darts onboard against "doomsday" tank such as the infamous Maus or bowl-shaped hull tanks like M103, it still comes with 4 ATGMs at its disposal with more than enough penetration against most targets of its rank. All of these features above makes it a fearsome brawler at its rank.

But do note that, although it has better power-to-weight ratio to US tanks, British tanks or Warsaw Pact tanks of its era, it is still not the fastest tank, targets like Leopards and AMX-30 will likely outrun 122TM for vantage point; wheeled vehicles started to be common by this rank as well as APFSDS where it will have few problem penetrating 122TM's armor. Do also be well prepared for enemies by turning the turret to where they might appear- the turret traverse speed is slow (albeit better than original T-54s). The "302" missiles onboard are also relatively inferior to its counterparts and flies slow, in some occasions it will be jammed by either IRCM on certain tanks or being intercepted by hard-kill APS on namely T-55AMD-1, sometimes even by bullets. So either utilize them on unnoticed targets or those who had already been crippled by your 120 mm gun, they will very unlikely survive the upcoming missile; if any helicopters do show up within its 3 km radius, taking them out with "302" is also viable but do make sure you lead enough onto the target.

Overall, the 122MT is a very versatile tank of its rank, both sniping and brawling works fine with 122MT depending on the map and the playstyle of players.

Somewhere in the corner of the YTO Group Factory in Luoyang, Henan is the home of some medium tanks of Mainland China as this factory (coded Factory 081) was known as the other tank factory other than Factory 617 (Norinco Inner Mongolia First Machinery Group) and the home of some batches of Type 59 and its variants; one of these stored tanks stood out among these tank prototypes: the Factory 704 prototype of Project 122 medium tank, the first attempt to design a new tank from scratch.

After the capture of a Soviet Border Troops' T-62 at Darmansky/Zhenbao Island on the Sino-Russian border, the tank engineers of Mainland China soon found themselves lagging severely behind the mainstream tanks (which by the time were already the dawn of MBTs such as the T-64A); the introduction of smoothbore cannons, two-plane stabilizers as well as active/passive night-vision devices were all new technologies for Mainland China which by the time only has relatively outdated Type 59s at its disposal. By the time WZ121 (Type 69) made it into commission, most of the aforementioned technologies were already been reverse-engineered onto the new tank. In parallel, way before the Darmansky Island Incident in April 1967, the COSTIND have already started the development of a brand-new MBT as well as new combat vehicles later known by its project name "Campaign 2-4" (二四会战).

Alongside with new amphibious tank, APC, the new MBT was dubbed Project 122 under the "Campaign 704" (704会战, issued 1970/4) in this case with the provision for 100/115/120 mm gun where the 120 mm was selected as the main cannon and became the very first 120 mm smoothbore cannon decade before the Rheinmetall L/44 gun made into commission. Due to the lack of experience on building smoothbore guns, most of the technology was the result of the reverse-engineering of U-5TS gun on T-62; the result wasn't pleasing either due to its low bore-pressure (312 MPa instead of the standard of 379 MPa for a high-pressure gun) as the tests in late 1970s showed the gun and its APFSDS didn't meet the requirements to penetrate the mock-up UFP plates of a T-72. Another feature of the early prototypes of Project 122 are the 2 pairs of 302 ATGMs onboard which might have been affected by the philosophy of tank-launched ATGMs. The 4 missiles welded onto the turret are the ancestor of the 2nd generation ATGM of PLAGF before HJ-8. Other features including a heavily-slopped UFP, shorter turret for a low-profile, new FCS with integrated optics, automatic ballistic solution and stabilizer, as well as sporting new suspension system (in case of the "triple-hydraulic prototype") and engine.

The new prototypes passed in an internal inspection for PLAGF in October 1970; however, due to the changes in design philosophy in 1972 which also led to a completely revoke of tank designs before Project 784 (predecessor of WZ123, later ZTZ99), most of the Project 122 MBTs bit the dust alongside with all the other planned vehicles of Campaign 2-4 other than the 1225 prototype (which later became the approved version of WZ122, aka ZTZ80). But all the efforts during this 5-years of research also marked a new start for Chinese MBTs where both the WZ122 (ZTZ80/85/88/96) and even WZ123 (ZTZ99) family utilized the technologies from Project 122.

The experimental Chinese medium tank Object 122TM is a new squadron vehicle for all War Thunder players. This is a classic layout tank with a cast domed turret and a Chinese-made 120-mm cannon. The vehicle features four launchers for anti-tank guided missiles, which may be used in battles not only against armored vehicles, but also against enemy helicopters. The gun itself has a fairly good flatness and is equipped with a stabilizer and night vision device in the gunner's sight. At the commander's disposal there are two types of armor-piercing fin-stabilized rounds, as well as high-explosive and shape-charged rounds. The tank has a good maximum speed, but most importantly, a high power-to-weight ratio. Coupled with a good turret traverse speed, this makes it an excellent close quarter duelist!