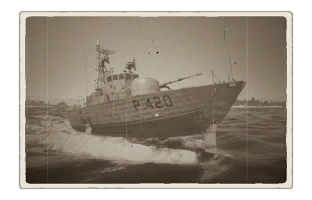 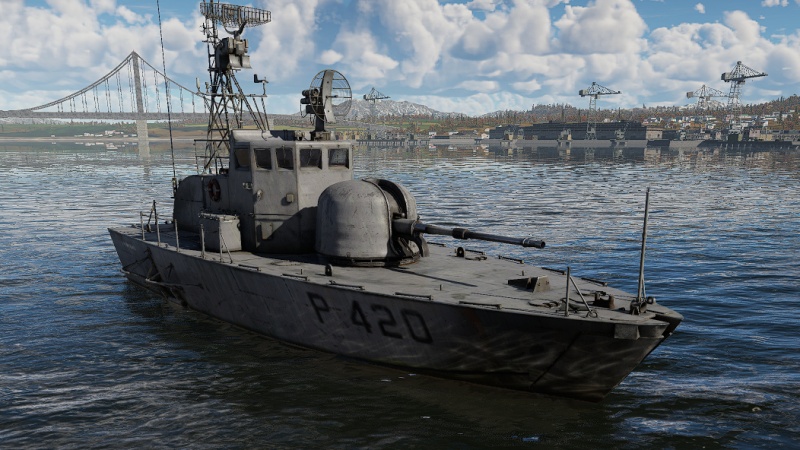 The Sparviero-class, Sparviero (P 420) is a premium gift rank IV Italian motor gun boat with a battle rating of 3.7 (AB/RB/SB). It was introduced a premium pack in Update "Starfighters" and granted access to Italian fleet closed beta testing. It was removed from the store after the 2020 New Year sale . It was reintroduced later in 2021 as a premium vehicle purchasable in-game with Golden Eagles

The Sparviero's crew is protected by 8 mm of armour around the hull, and 3 mm of armour around the superstructure. This lacklustre armour isn't substantial enough to protect the ship from constant damage from machine guns or auto cannons. The gun in particular is extremely easy to disable thanks to its size and position on the ship. The Sparviero has the best chance for survival when it is on a flanking rout using its high speed to avoid frontal engagements. The gunboat also lacks anti-aircraft guns controlled by AI to defend against planes, but that can be countered by loading the variable time shell and shooting manually at aircraft.

The Sparviero is one of the few ships equipped with a hydrofoil, allowing the gun boat to reach a high speed of 93 km/h when raised out of the water, but while out of the water the ship becomes difficult to manoeuvre in tight environments. In contrast, the Sparviero can only move 20 km/h in reverse, but the hull will remain in the water. While the ship's hull is submerged, the hydrofoils pose a risk of ramming parts of the environment, such as reefs and land under shallow water, so it is recommended to learn what positions might pose a threat to beaching the boat.

Being one of the fastest boats in naval forces, the Sparviero excels in rushing advantageous positions to defend capture points and flank enemy routes. The gunboat shouldn't be used for contesting points directly due to its weak crew size, and protection unless the area has already been cleared. The largest threat to the Sparviero are similar hydrofoils and faster patrol boats such as the PG 02, and the PT-811 which can contest the Sparviero from reaching flanking spots, using their superior speed and firepower. Similarly tiered destroyers such as the USS Barker also pose a threat because their main armaments can hullbreak the smaller gunboat.

The Sparviero is a fairly complicated hydrofoil to play, it's a ship that needs to be played for quite a while to be fully understood. With its light armour, it will be hard to come out of a solo encounter as a winner. This ship should be played in a group, be it with other Sparviero or other ships, NEVER be alone. With its excellent rate of fire, it can take out light ships in a few shots. It is recommended to bring 60 SAPOM and 35 HE-VT MOM shells. Unfortunately with the low penetration of the SAPOMs you will only be able to shoot at small and light targets, or aim at precise modules on the slightly larger ships, for example the main turrets or engines.

In the 1970s, on a derivation of the American "pegasus" project, the 928-22A "swordfish" project was born, which was to be known as the "Sparviero" (P420), It was a missile hydrofoil with "submerged wings" designed to replace torpedo boats and motorboats in the difficult Adriatic theatre.

The program was to be financed by the 1975 Naval Law and after the prototype "Sparviero", CNR Muggiano would construct 6 units, finally completed in 1983.

Built in light alloy with a honeycomb structure, they were armed with a 76/62 OTO super fast gun and 2 OTOMAT missiles.

At 23 metres and about 60 tons fully loaded, it had the concentrated firepower of a frigate, governed by a crew of 10 men.

The Sparviero P420 hydrofoil is part of the Nibbio class, a series of missile hydrofoils that remained as a remnant of the NATO program in seven examples including the prototype Sparviero.

These hydrofoils entered service during the '70s in the MMI (Italian Navy), the hydrofoils were classified with P and the pennant number, all 7 examples were put into service and these were:

The end of the Cold War also decreed the decommissioning of the hydrofoils, which were partially replaced by new smaller units, such as the Commander class, whose operational capabilities are extended by the availability of a helicopter on board.

These hydrofoils remained in service until they were decommissioned during the early 2000s.

3 Nibbio-class ships were built for Japan and delivered between 1993 and 1995 but they had a different armament from the Italian ones, a JM61-M Vulcan 20 mm minigun and 4 SSM-1B missiles.

The class was renamed to Missile-Tei 1-Go and consisted of:

During the 1960s, the Alinavi consortium developed a hydrofoil attack craft on the basis of the PGH-2 Tucumcari design, previously built by Boeing. In the early 1970s, a prototype was ordered for construction, receiving the name "Sparviero". The Sparvieros served faithfully with the Italian Navy until early in 2000 before being finally decommissioned.