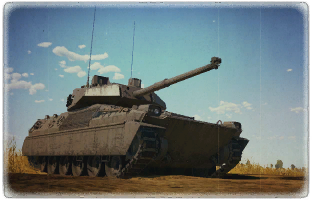 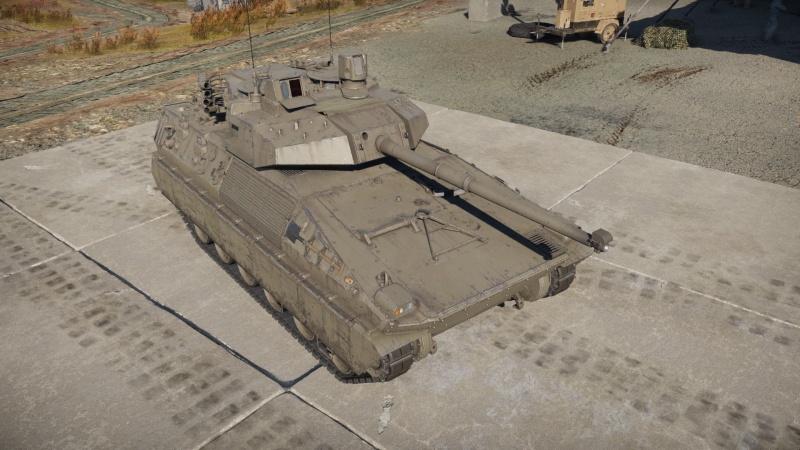 60 mm cannone da 60/70 cannon
Two-plane stabilizer
Reduces the swing of the gun in two planes while moving
Autoloader
Automatically feeds projectiles into the breech. The speed does not depend on the skills of the loader
Ammunition32 rounds
First-order16 rounds
Reload2.0 s
Vertical guidance-6° / 40°
Main article: Cannone da 60/70 (60 mm) 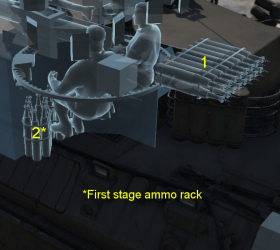 When playing the VCC-80/60, some of its playstyles for it include using it as either a support or as a flanker. You should attempt to always have a good line of sight where you can take enemies off guard to maximise the effectiveness of your main caliber armament. One example being that the VCC-80/60 at times can be used effectively in urban combat, usually if a player was to pick a hidden spot to set up, when the enemy goes past hopefully without seeing you, you will be able to hit them in the side with your main 60 mm cannon. This vehicle at the start of a match can prove to be a very effective first spawn in the hands of an experienced player, as the enemy team might not expect such a vehicle to cause them troubles early during a match. To maximise the effectiveness of this vehicle, you must learn what it excells at, and what its not so good at.

While stock, your main way to be effective is to scout enemy players and take them out when they are near you. Do not bother to engage from long ranges unless you are 100% sure that the vehicle you are going to engage will be damaged from your shot. Once you research the important modifications for this vehicle (Thermals, Engine, OTO HT-VT) then you may begin to play more solo and without having to rely on your teammates too much. Such modifications allow the VCC-80/60 to really be a devastating support vehicle that at times the enemy team won't have a proper counter to adequately deal with.

In terms of its main weapon, the VCC-80/60 has access to a 60 mm OTO High Velocity Medium Support automatic cannon, (HVMS for short). This cannon is the exact same one featured on the premium event vehicle known as the AUBL/74 HVG, only difference being the turret and loading systems being vastly different from each other. Unlike the AUBL/74 HVG, the VCC-80/60 features a automatic loading system which allows the vehicle to get a fire rate of 1 round every 2 seconds. Paired with a 60 mm APFSDS round will at times lead to devastating results for the enemy team. The most dangerous enemies you will face will be enemy MBTs.

One of the downsides of this vehicle also is its M300 APFSDS round, sadly the round does not have much spalling therefore to make the most of it you quite literally have to hit enemies exactly in their weak spots. This is a problem for many reasons, the big one being that it is forcing you to play in a non-confrontational manner, going head on against the majority of Russian tanks you'll face will not end well for you. You will have to learn every tanks weak spot that you can encounter if you wish to remain on the same footing as the enemy team. You can however aim for the classic weak spots every tank has which will always show positive results, them being the engine compartment, their cannon and breach, and lastly their tracks. You might not get enough time to finish them off yourself, but you will still help in rendering them disabled, giving you a higher chance to take them out yourself or get a nearby teammate to do it for you.

Another downside of the vehicle is due to the VCC-80/60's poor survivability. As mentioned previously, it is best advised that you stick far away from enemies and try pick them off with your main cannon if you believe you can take them out. Surprisingly, unlike the other Dardo and VCC-80/30, this vehicle actually has a somewhat protected turret, its cheeks can at times stop some HEAT and autocannon fire, something which many IFV's and support vehicles that you'll encounter can't exactly boast of. Generally speaking though, just act as if the vehicle can be shot and penetrated or destroyed from anywhere by any round. The VCC-80/60 sadly doesn't carry a lot of ammunition for your weapon systems so pick your targets and evaluate what place is the best to take out your enemy whilst not consuming too much of your ammunition.

One of its upsides comes with the researchable round known as the OTO HT-VT, with this modification unlocked the vehicles offensive capabilities against aircraft greatly improve. It is surprisingly quite effective, and many enemy players are not likely to expect a ground vehicle of your nature to be able to pose a threat to them. Try a use this to the utmost of your advantage, when an aircraft or helicopter get a bit too close to the battlefield, don't hesitate to potshot it. With the VCC-80/60's 2 second reload, it does become a sort of pesudo anti-aircraft vehicle. For helicopters which are hovering a bit outside of the general battlefield, it's recommended that you range them to adjust the trajectory of the round, if all goes well you should see positive results. That said, don't just focus on aircraft, It's also useful to know that if you are playing in your support role, the VCC-80/60's scouting ability will be extremely useful for both you and your team.

Other neat additions that will greatly aid you is the VCC-80/60 thermal imaging device made by Kollsman. Although only available for the gunner, it is a great asset that you'll be able to use once unlocked to easily pick out and spot enemies. In terms of defence systems, it has access to smoke dischargers, which at times can prove to be very useful by countering helicopter guided munitions. In terms of mobility, when spaded the vehicle is good for capturing points in the late phase of the game. Another system the vehicle has is a laser warning receiver which will alert you when either an enemy ground/air vehicle is looking at you. This also should apply for all game modes, be aware that in Arcade battles the enemies are able to see your weak spots when they aim at you, so keep that in mind if you decide to go hull-down as an experienced player might just go for a different module, such as your cannon barrel or breech, and finish you off slowly.

During the late stages of the Cold War, OTO Melara, assisted by IVECO, had been designing a set of new multi-role armoured fighting vehicles in the hopes that enough interest would be generated to get the vehicles picked up either by the Italian Army or by possible foreign customers. Multiple different types of unique designs, with vastly different sets of armaments would arise during that era. These vehicles would however not generate much success in or indeed outside of Italy, but eventually during the '80s OTO Melara would finally come out with a design which would finally be picked up by the Italian army.

Despite a troubled development cycle, the VCC-80 Dardo would enter service and would continue to serve inside of the Italian army even till this day. Although the base version which is being used is comprised of the OTO TC-25 turret armed with a 25 mm Oerlikon-Buhrle cannon and TOW ATGMs, OTO Melara would heavily experiment on the previous versions known as the VCC-80.

The general configuration of the VCC-80 is conventional, being similar to other contemporary infantry fighting vehicles. What sets it apart is the design, being very well self-proportioned and well executed. The hull as well as the turret of the VCC-80 is welded from plates of aluminium alloys (5083 and 7020 type). These vehicles would be extremely useful in gaining valuable know-how, and allowed OTO Melara to see what worked and what didn't.

One of these cases would be the VCC-80/60, a one-off prototype which would utilize a very special weapon system known as the OTO T60A. The OTO T60A was a further development of the joint Italian-Israeli collaboration of the 60 mm High Velocity Medium Support (HVMS) weapon system. In short, both countries had disagreements which led to them going separate ways when developing the cannon. 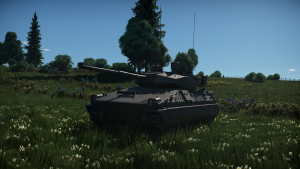 Outside of Italy, many different turret variants would come out, such as the OTO T60M which would be manually loaded and tested unto a Fiat 6616 vehicle, and then the OTO T60A which would be autoloaded and installed on various different vehicles such as the OTO Melara AV-90, B1 Centauro, and of course, the VCC-80. The T60A would come in different versions however the one installed on the VCC-80/60 would be a special version which would mount a special armour kit at the front of the turret, this would surprisingly protect the crew quite a bit from KE munitions and low level auto-cannon fire. However the turret was not invincible, advanced APFSDS used on MBTs of the time would easily be able to penetrate the vehicle, same goes for the hull which was even less protected than the turret. It is important to note that this vehicle variant was primarily advertised to be a troop support vehicle, and was not designed to fight tanks 1-on-1, instead the idea was to keep it close to infantry where it could adequately provide support while also being able to be a platform which could repel any enemy helicopter attacks thanks to its special munitions. The 60 mm cannon could use proxy, HE and APFSDS rounds, which as previously mentioned would be autoloaded, specifically it could fire 1 round every 2 seconds. The vehicle sadly did not generate interest with the Italian Army, which instead opted for the variant armed with a 25 mm. It is unknown what happened to the 60 mm variant, however it is good to note that Poland at one point showed interest and decided to utilize the same weapon system for a vehicle called the 'BWP 2000'.