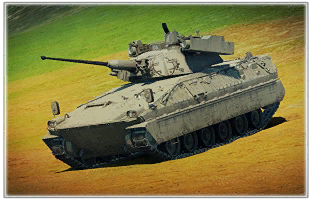 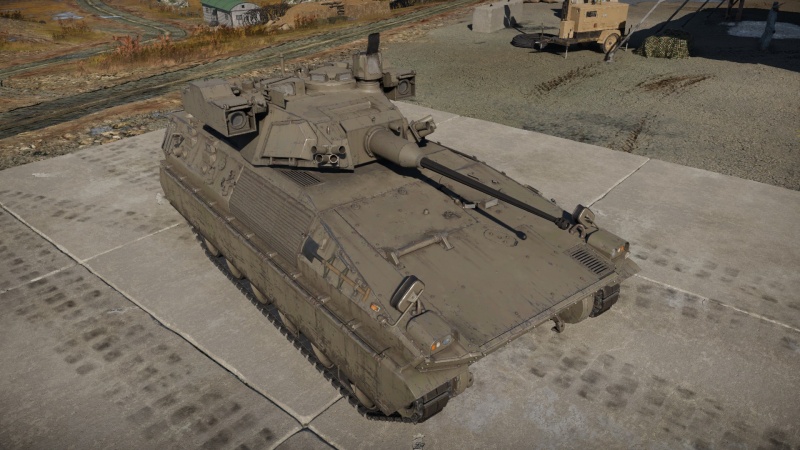 The VCC-80 (HITFIST 30) is a rank VII Italian light tank with a battle rating of 9.7 (AB/RB/SB). It was introduced in Update "Ground Breaking".

The VCC-80/30 is one of the prototypes created during development of the Italian Dardo IFV, featuring a 30 mm quick firing Bushmaster II gun and a commander's sight.

The survival of the VCC-80/30 is characterized by good armour and crew. The armour is made of rolled homogeneous armour and aluminum that make up an effective armour of 77 mm at the top of the hull, while at the bottom, the most vulnerable part, the armour amounts to 46 mm. This armour is very weak, it can barely defend against 20 mm shells.

Inside the VCC-80/30 there are 3 crew members: the driver, the commander and the gunner.

The engine is at the front of the vehicle and is separated from the driving area with a rolled homogeneous plate of 6 mm. This plate that separates the driver from the engine serves to increase the vehicle's resistance against shrapnel and fire.

The VCC-80/30 has a different style of gameplay than the Dardo IFV, but instead is very similar to the M3A3 Bradley. Do not rush at capture points or enemies, because your main gun cannot damage enemy tanks as easily as the previous Dardo. It's best to stay hidden and therefore not fire as many shots. In terms of the mobility, the VCC-80/30 is almost equal to the Dardo IFV since the hull is the same, just slightly taller. The TOW launchers are equipped with TOW-2, TOW-2B, and also the TOW-2A ATGM with tandem warhead (to penetrate tanks that have ERA protection). It is always recommended to bring some TOW-2B while the rest of the vehicle holds the TOW-2A. The TOW launchers can only be used when in battle mode or when stationary. In addition to the TOW launchers, the VCC-80/30 carries a 30 mm Bushmaster II cannon with a slow rate of fire and increased penetration using APDS and APFSDS. It is very useful for attacking less armoured enemies on the side. Do not to rush the capture points or go to contact with the enemy, look for a way to get around them or attack them by surprise, because only one hit is enough to destroy you.

After the VCC-80 "Dardo" program was finalized, OTO Melara also had many plans to export the machine, or parts of the machine, to foreign countries who might've been interested in acquiring Italian technology. The standard version of the VCC-80 'Dardo' IFV would itself be armed with a 25 mm Oerlikon autocannon, which would be installed onto the OTO TC-25 Hitfist turret, however during the '90s OTO had designed an upgrade kit for the TC-25 Hitfist turrets, which were primarily made as optional armament available for anyone interested in up-gunning the IFV from a 25 mm Oerlikon to a 30 mm Bushmaster.

This version of the TC-25 Hitfist turret would be mainly seen in military arms exhibitions, but for testing reasons, this up-gunned version of the turret would also be tested on the VCC-80 'Dardo' IFV. Not much is known in regards to the tests, however it is safe to assume that the Italian army at the time was not interested.

The upgraded TC-25 Hitfist was armed with a stabilised dual-fed 30 mm Bushmaster II which could fire a variety of munitions, including 30 mm APFSDS. In addition, it had access to a 7.62 mm MG with 700 rounds, and 2 TOW ATGM launchers, which were able to fire ITOW, TOW-2, TOW-2A, and TOW-2B. In terms of FCS, it utilised the same Kollsman Day/Night sight already present of the production batches of the Dardo IFV, more interestingly tests conducted on the up-gunned Dardo also showed that despite the new calibre, a commander sight was still always available. Lastly, if there was a need to disengage from a firefight, 8 x 80 mm smoke launchers were still available. Overall this would've been a great potential upgrade which could be easily done for the Dardo, however since the Italian army had no interest it was never done in a high amount. Instead, nearly 20 years later, OTO Melara would showcase a new upgrade for the Dardo which would use a 30 mm autocannon, but instead of the TC-25 Hitfist turret it would be presented on the 30 mm OWS turret.

OTO would continue to showcase and hopefully sell the TC-25 Hitfist turret up to the early 2000s. The modified turret would generate some interest in the UK, specifically with the Alvis Stormer 30, which started as a private venture. The reasoning was mainly so the new vehicle could meet potential user requirements for a high-mobility air-portable armoured reconnaissance vehicle. The development of the Stormer 30 started in 1995, with the first prototype completed in the year 1997. Sadly, Alvis didn't manage to generate any interest with the Stormer 30 so OTO Melara was once again without a potential customer for one of their items.

During the development of the Dardo IFV, several variants of chassis and turrets with different guns took part in the competition. The prototype VCC-80 with a HITFIST turret is slightly higher than Dardo, and designed to mount the American 30 mm Bushmaster II cannon. Despite the more advanced fire control system and an additional electro-optical periscope for the commander, the military preferred a more compact version of the turret with a 25 mm gun, the HITFIST turret later used for a prototype infantry fire support vehicle and escorting motorized columns with a 60 mm gun.

The VCC-80/30 is another variant of one of the best infantry fighting vehicles in War Thunder, the Italian Dardo. Despite the similarity of these machines, the VCC-80/30 - although it is only a prototype of the Dardo - surpasses its serial brother in some aspects. The main difference between the machines is the turret and the gun. The prototype has a HITFIST 30 turret, which houses a 30 mm Bushmaster II cannon, which is more powerful than the first version already familiar to you from the Bradley, but with about the same rate of fire.

Just like the Dardo, it has ATGM launchers for the TOW-2, the tandem-warhead TOW-2A, and TOW-2B, that hit the enemy from above. The up-to-date fire control system includes sights with NVD (and thermal imaging for the gunner), it also includes a laser rangefinder, and an effective two-axis stabilizer. An additional periscope commander's sight is installed on the tower.