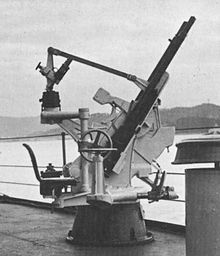 Breda Model 31 on a vessel

The 13.2 mm Breda Model 31 is a heavy machine gun, used by the Italian Army in the Second World War. It was used by the Regia Marina (Navy), Regio Esercito (Army) and Regi Sommergibili (submarines).

As a heavy machine gun, the Breda Model 31 is capable of dealing with lightly armoured targets and torpedo boats. The presence of incendiary components in the M14/41 (47/40)'s belt also makes it quite effective against aircraft.

For the M14/41 (47/40) the ammo count is very low in comparison with other nations' counterparts, like American M4s' M2HB (12.7 mm) heavy machine gun. Compared with the Japanese Type 93 (13.2 mm) heavy machine gun, the Italian one has poor ammo belts choice, with only one option for every vehicle.

In battle the Breda Model 31 has to be used only against light armoured vehicles, trucks, open top vehicles or motor torpedo boats, since at best it can provide 24/27 mm of penetration. It also needs to be fired carefully to save ammo in the M14/41 (47/40).

The Breda Model 31 is a copy of the French one made by Hotchkiss, since Breda bought their license to fabricate it in 1929; it entered the production line two years later, in 1931. It was later replaced by the M20/65 Model 35.