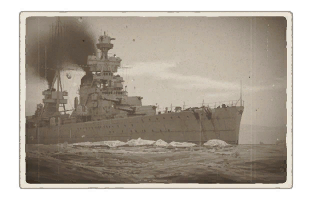 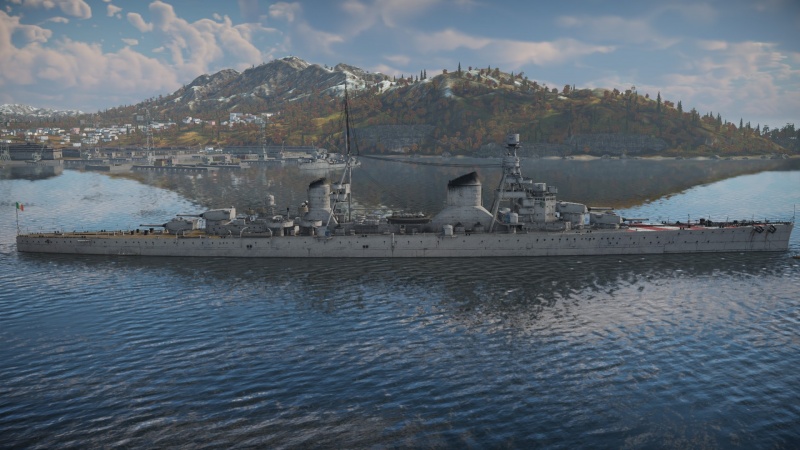 The Trento has reliable armour to protect the 987 crew allowing the ship to take a few hits when angled. The citadel is covered 70 mm of armour on the side, 60 mm at the bow behind the forward fuel tank, and 50 mm at the rear ending just before the last set of fuel tanks and pumps. This adequate armour scheme allows the ship to take damage fairly well, but prolonged engagements will have the crew and modules disabled quickly. The main turrets are encased in 100 mm of armour around, as well as decent angles causing the ship to rarely lose the main armament when in duels. However, the bridge siting behind the front turrets is vulnerable as it's only a flat 100 mm, meaning that it is reliably destroyed by other cruisers, but is protected from anything firing HE rounds. The biggest downfall of the Trento is fairly weak armour around the ammunition; with only 70 mm of armour near the water line these stowage rooms will quickly be set off if the ship is shot from a flank, however the armour is reliable enough to stop glancing shots when angled. The on-board torpedo reloads is also a concern on the ship, as when hit they will also incapacitate modules surrounding them. The Trento is at its highest survivability when angled bow in towards an opponent, with the torpedo loadout unequipped before battle.

The Trento is tied with the IJN Kako, Tone, and Mogami as the fastest heavy cruisers in-game at a speed of 65 km/h at full speed. The reverse speed is 25 km/h. Overall the ship feels sluggish considering its lacklustre armour, and armament, but it is the most manoeuvrable in its class as a heavy cruiser.

The secondary armament consists of 12 x 100 mm/47 O.T.O Mod.1928 cannons in 6 dual-mounted turrets. The ammunition selection consists of HE Dirompente, APHE Perforante, and HE-TF Contro-aerea. Both HE rounds have a penetration of 17 mm at any range, and an explosive mass of 1.3 kg, while the APHE has a penetration of 150 mm at 100 m and an explosive mass of 820 g. The HE-TF is the best shell to have loaded for the AI-controlled secondaries, because of its versatility shooting at planes and ships, but when controlled by the player the APHE can quickly dispatch smaller targets.

The Trento is armed with 16 x 533 mm steam-turbined S.I. 270/533,4X7,2 Tipo I torpedoes with an explosive mass of 270 kg each. With the torpedo mode disabled, the torpedo will travel 4 km at a speed of 89 km/h. When enabled the torpedo will go 10 km at a speed of 70 km/h. It is not recommended to bring these torpedoes because it adds a massive external ammo rack that will disable the ship when hit, and the static broadside torpedo launchers are extremely hard to use in combat.

Located on the bow is a catapult with one Ro.43 scout plane which provides unique offensive and defensive abilities, expanding tactical options. Ship-launched scout planes fly just like regular tree units but lack munition choices and cockpit views. The Ro.43 is a 2 seater equipped with two fixed offensive light machine guns and a single defensive machine gun turret, but no bombs. It does have the scout plane ability to cap zones and lay down smoke cover (up to 3 times). Captains will be wise to remember to utilise the aircraft and consider when best to use it, for example to cap a point early or late in the match, to create a smoke screen to stymie enemy bombardment and repair, to attack enemy units directly, or perhaps something completely new!

The Trento is best used to support pushes towards caps by using its good module layout and crew complement to safely approach an area to defend. Finding a good spot to snipe from is important in the Trento's playstyle because its accurate guns allow it to defend zones from a distance. Brawling can be done but it is risky because other players can abuse the slower reload rate on the higher calibre guns. Notable counters to the Trento would be the Admiral Graf Spee and USS Brooklyn, because they have rounds that can bypass the armour, and higher damage output. Enemies that can get firing angles on the rear of the ship will have an easy time disabling the Trento as well. Due to the accurate guns of the Trento and good rounds, targets with ammo racks exposed above water are particularly easy to destroy, such as the Admiral Hipper and Sverdlov.

Designed as a response to the French Duquesne-class cruisers, the Regia Marina developed the Trento class with an emphasis on speed and light armour. The Trento and Trieste would eventually be used in the Mediterranean sea to escort convoys, and support in actions against British forces in the area. Both ships succumbed to torpedo and bombing attacks before the end of the war.

In the early 1920's, with the signing of the Washington Naval Treaty, Italian shipbuilders began studying the possibilities of developing a new cruiser design that would match the restrictions imposed by the agreement. From the onset, it was clear that sacrifices in some aspects would need to be made in order to stay within the 10,000 ton treaty displacement limit.

As a result, Italian shipbuilders decided to focus on speed and firepower, while keeping protection light in order to conserve weight. In the end, a design was presented which promised a top speed of around 35 knots, armed with four dual 8" turrets and only slightly exceeding treaty limitations. Despite having their reservations about the design, the Regia Marina ordered two ships to be built in the mid 1920's - Trento and Trieste - thus forming the Trento-class of heavy cruisers. Still not fully convinced however, the Regia Marina would subsequently place orders for a more balanced heavy cruiser design, later becoming the Zara-class cruisers, but that's perhaps a story for another devblog.

Trento itself, named after a city in the northern regions of Italy, was laid down in February of 1925, being launched in October 1927 and finally entering service with the Regia Marina in April 1929. In the interwar period, Trento undertook a tour of South American countries, protected Italian nationals during the Chinese Civil War and ferried Italian volunteers from the Spanish Civil War back to Italy in 1938.

During WWII, Trento and Trieste took part in numerous actions in the Mediterranean theatre, frequently clashing with detachments of the Royal Navy. Most notably, Trento took part in the battles of Calabria, Cape Spartivento and Cape Matapan from 1940 to 1941. In 1942 however, during an Italian counter in the Allied Operation Harpoon, Trento sustained torpedo hits from a British torpedo bomber as well as a submarine. The resulting magazine detonation caused by the second torpedo hit led to the warship sinking below the waves in a matter of minutes. Trento was formally struck from the Italian naval register in the immediate postwar period in 1946.