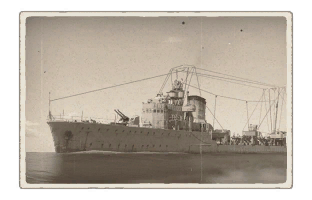 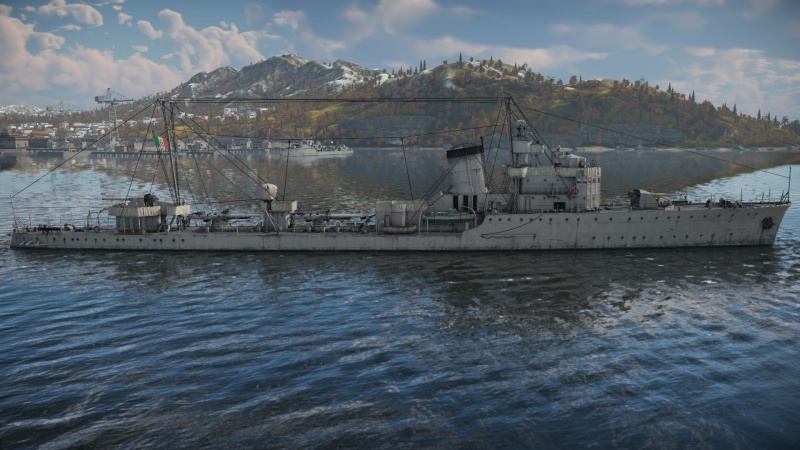 The Dardo-class, RN Dardo, 1935 is a rank I Italian destroyer with a battle rating of 3.7 (AB/RB/SB). It was introduced in Update "Starfighters".

The RN Dardo is as well-defended and durable as its predecessor, the RN Turbine. Her superstructure is lined with 4 mm steel, which in combination with the 16 mm hull provides the RN Dardo with excellent resistance to encounters with up to 152 mm shells. Her low-profile hull provides the ship with good survivability; she is also well protected below the surface.

The RN Dardo offers enough space for a complement of 185 sailors. The crew is well distributed throughout the ship evenly. A well distributed crew is very helpful in repairing damage, putting out fires quickly and effectively. At its Battle Rating, the RN Dardo ranks second in crew, ahead of the German T22 with 205 members, but the RN Dardo significantly outperforms it in survivability and armour.

The primary offensive armament was developed in the mid-twenties by Ansaldo as the primary weapon for the destroyers of the Regia Marina, a cannon derived from the 120 mm/50 mod.1909 cannon, a version produced under license from the English Armstrong and Vickers, which equipped the Dante Alighieri-class and Conte di Cavour-class battleships and the explorers Quarto and Marsala.

Ansaldo and Odero-Terni-Orlando (OTO) produced several ships armed with this cannon. The cannon was also equipped on the Conte di Cavour class battleships (after their reconstruction) as secondary anti-torpedo armament and on several classes of destroyers as primary armament until the Second World War.

Each barrel is made of steel and the core has 36 right-hand lines. The bolt is side-locking. Each muzzle has two firing brakes, positioned inferiorly. The cradle, single or twin, is encased on a platform mount, equipped with shield or full turret. On single installations the elevation and swinging manoeuvres were manual, while twin installations were equipped with an electric system.

Ammunition was separate, with pouch cartridge. The 120/50 projectile weighed about 23 kg and was available in armour-piercing (AP), explosive (HE), incendiary and illuminating versions.

In-game, Dardo can carry APHE, HE, and HE-TF rounds. The APHE has a penetration of 154 mm with an explosive mass of 1.3 kg, the HE can penetrate 21 mm and has 1.63 kg of explosive. The RN Dardo also has HE-TF shells that are very effective against aerial targets. At the RN Dardo's battle rating, no ship has APHE as a main armament projectile, which makes this ship unique.

The original Mark II design was quite prone to many defects and the Mark II* was a modified version that improved reliability. Stoppages and jams were still common in these models as bullets slipped out of their mounts and the fabric belts often stretched and tore.

The Mark II*C was a further modification that used a 14-shot steel-link belt instead of the fabric belt. About 50 of these rifles were sold to the Italian Navy. They were then manufactured under license by Terni (Italy) until the early 1930s. The Terni version used a 50-round ammunition box.

The 40 mm have a very important task in the match, they are capable of neutralizing any aircraft within a 4 km radius, and can give good suppressive fire in support of the main armament.

The Breda Mod. 31 is an automatic firearm which is gas-operated and along with a fixed barrel. The firing takes place with the bolt open. The cooling is by air through the sleeve with fins along the entire barrel. The weapon is fed through semi-curved 30-round magazines.

The Regia Marina used it on almost all its units. The single system, with a fork shaped barrel on a tripod support of 87 kg, was installed on MAS.

The twin rigs were essentially of two types: on the larger units a tied-rod rig was used, operated by a single pointer with a seat offset to the right of the barrels; this type of rig was (partially) replaced in 1936 by the twin rig of 20/65 Mod. 1935.

On submarines, a particular type of concealed twin-mounted system was used, which during navigation was lowered into a watertight compartment.

The land version armed the M41 and M42 self-propelled control tanks and the prototype of the Ansaldo L40 troop transport vehicle, installed in a casemate on a sphere armoured car.

The RN Dardo is equipped with 2 twin turrets of Breda Mod. 31, and are positioned high up just behind the command bridge in the central position of the ship. In play they have an effective range of about 1,500 m and a maximum range of 2 km.

The RN Dardo's auxiliary armament consists of two triple torpedo launchers positioned in the center of the ship. This excellent central placement offers a view of more than 180 degrees on both sides of the vessel.

If the torpedo were to hit an enemy ship it would unload 270 kg of explosives, causing catastrophic damage to the enemy ship.

The RN Dardo is a particular ship to play, it has the stamina and survivability necessary to be in the front line, but without the support of a team it struggles. So it is suggested adopting a tactic as support of the team: stay in the second line and not too much in the middle of the action. Only if the team supports the advance can you go to the front line. Since the hold of the RN Dardo is located in the frontal part of the ship, it is recommended to slightly angle the hull or point the bow towards the enemy, so as to minimize damage to the hold. Thanks to its good speed and manoeuvrability, it is very effective as a destroyer and can move quickly in the direction of the enemy to be torpedoed, and with its excellent manoeuvrability it will not be a problem to avoid enemy strikes.

The Dardo-class was created to replace the old Turbine class, the main difference was a better range and new twin 120/50 Ansaldo mod.1926 cannons instead of 120/45.

The first 4 ships of 1st Series Type Freccia were built between 1928-1929, their construction was divided between two Genoese shipyards, Odero Terni Orlando (OTO) and Cantieri del Tirreno. The 1st Series is called the Freccia class, and consists of the following destroyers:

One year after the 2nd Series divided between the Workshops and Shipyards Partenopei, the other 4 Classes Dardo of 2nd Series Type Folgore, but in particular these units were modified, strengthening the structures of the hull but eliminating an area of the tank for fuel.

The 2nd Series is called the Folgore class, and consists of the following destroyers:

The RN Dardo was a destroyer of the Dardo-class of the 1st Series Type Freccia, used by both Italian and German navies.

In 1936-1938, it participated in the Spanish Civil War. The entry of Italy in World War II was framed in the VII Squadron destroyers, along with the twins RN Freccia, RN Saetta and RN Strale, in 1940 as part of several convoys.

On September 23, 1941, while it was being towed to a dock in Palermo, it went astray due to the lack of weights and capsized. 40 men died in this incident.

After the repairs, in 1942 the torpedo launchers were replaced with 37 mm cannons and 3 x 20 mm cannons. In July 1942, a turbine exploded and damaged the RN Dardo.