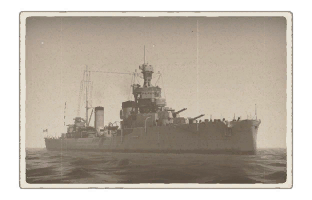 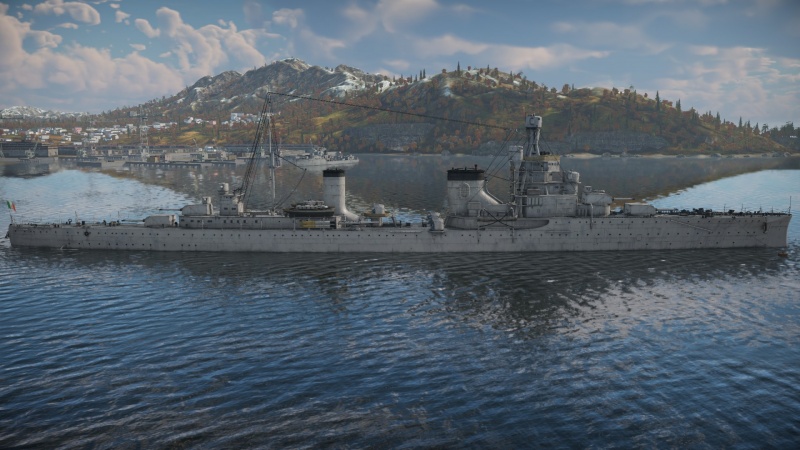 The Alberto da Giussano-class, RN Bartolomeo Colleoni, 1932 is a rank III Italian light cruiser with a battle rating of 5.0 (AB/RB/SB). It was introduced in Update "Starfighters".

Historically Bartolomeo Colleoni was the third ship of the Condottieri-class, she was laid down in June 1928 and commissioned in February 1932. Comparing to the later RN Raimondo Montecuccoli (laid down in October 1931) it had a significantly worse protection, completely lacking any armour around barbettes and having a weaker citadel armour. It was originally designed as a direct counter to the French large destroyers, thus speed was of a much more value than the armour.

RN Bartolomeo Colleoni has 4 turrets with 2 x 152 mm cannons each. They can load normal HE, APHEBC, or HE-TF shells. The turrets all have good horizontal traverse range, and only a small angle is required for a full broadside salvo. The fire rate is slow, but with good ballistics and explosive filler, the HE shells should still be able to quickly dispatch any unfortunate destroyers. The APHEBC shells are well suited for use against better-armoured targets, such as other cruisers. The HE-TF shell can be useful against aircraft, but are difficult to use efficiently due to their fixed timed fuse.

RN Bartolomeo Colleoni has 6 x 100 mm cannons split into 3 turrets as secendary armament. They are positioned in the middle of the ship. Due to their placement, only two turrets can be fired in the same direction at the same time. Their reload speed is much better than the main cannons, as to be expected with the smaller calibre, which means they can be used efficiently as supplementary damage output while waiting for the main guns to reload. Three shell types are available: HE, APHE, and HE-TF*.

Located amidships is a catapult with one Ro.43 scout plane which provides unique offensive and defensive abilities, expanding tactical options. Ship-launched scout planes fly just like regular tree units but lack munition choices and cockpit views. The Ro.43 is a 2 seater equipped with two fixed offensive light machine guns and a single defensive machine gun turret, but no bombs. It does have the scout plane ability to cap zones and lay down smoke cover (up to 3 times). Captains will be wise to remember to utilise the aircraft and consider when best to use it, for example to cap a point early or late in the match, to create a smoke screen to stymie enemy bombardment and repair, to attack enemy units directly, or perhaps something completely new!