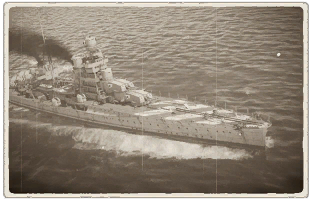 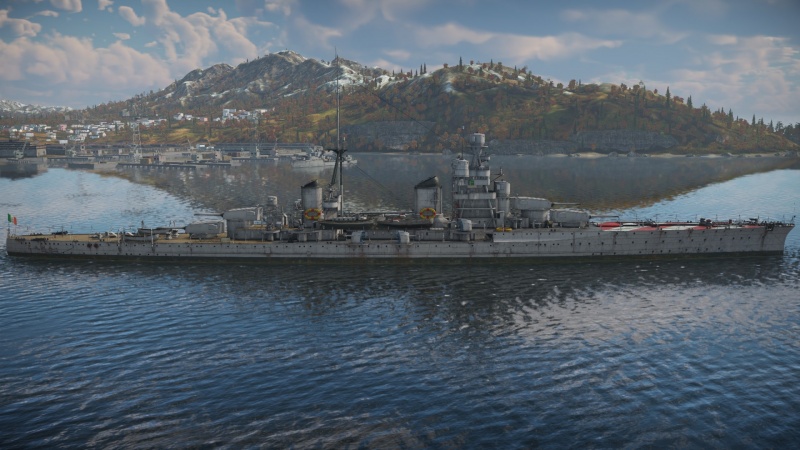 The Zara-class, RN Zara, 1941 is a rank V Italian heavy cruiser with a battle rating of 5.7 (AB/RB/SB). It was introduced in Update "Raining Fire".

The armour can easily tank aircraft fire and rounds below 100 mm of penetration, however, be aware that the Zara has decent speed, so if you rush in too fast and expose your flanks, you are going to get taken out easily by a shot to the engine.

Zara has below average manoeuvrability for a ship its size, keep in mind not to over-rotate the wheel, as it may cause you to expose the engine, which if exploded, will set ammunition near the upper-back deck ablaze.

Located on the bow is a catapult with one Ro.43 scout plane which provides unique offensive and defensive abilities, expanding tactical options. Ship-launched scout planes fly just like regular tree units but lack munition choices and cockpit views. The Ro.43 is a 2-seater equipped with two fixed offensive light machine guns and a single defensive machine gun turret, but no bombs. It does have the scout plane ability to cap zones and lay down smoke cover (up to 3 times). Captains will be wise to remember to utilise the aircraft and consider when best to use it, for example to capture a point early or late in the match, to create a smoke screen to stymie enemy bombardment and repair, to attack enemy units directly, or perhaps something completely new.

RN Zara is one of the ships with the most survivability at its BR, its cannons carry:

When you start using the RN Zara, you will find that it can survive significant damage from other enemy ships (except from hits from battleships that can easily destroy any cruiser).

When you just spawn in the game look at where the enemies are spawned and angle them according to the shots they are firing at you, and of course return fire, remember that you have little dispersion until 8,000 m while if you fire beyond 8 km you will have a hard time hitting enemy ships because it greatly increases the dispersion of the guns.

Always try to aim with HE above the enemy ship while with APHEBCs on enemy holds, so you can destroy with one salvo an enemy, ship holds vary for each country so go look at the ships that may appear at your BR. Remember that your ship is has good speed and manoeuvrability which gives you the ability to dodge torpedoes and enemy salvoes.

Zara was the lead ship of the Zara class, a group of four heavy cruisers built for the Italian Regia Marina in the 1930s. Designed with a sophisticated armament, good survivability, and competitive speed, she was among the most advanced heavy cruisers in service at the time of her introduction. However, her standard displacement of 11,700 tons exceeded the limits of the Washington Naval Treaty significantly; her nominal weight was just slightly under the 10,000 ton limit, allowing her to be built. Zara saw some service before the Second World War, including in the Spanish Civil War. Following the outbreak of war, she was present at the Raid on Taranto, and survived unscathed. However, she eventually met her demise at the Battle of Cape Matapan, where she was engaged at close range by three Royal Navy battleships. 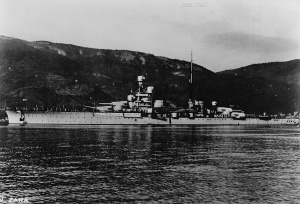 While the Trento-class heavy cruisers were under construction, the Italian naval command began doubting their effectiveness. They soon put forward a new cruiser design, trading the Trento's high speed for additional armour protection. The finished design weighed over 11,500 tons standard,[1] which was far above the limits set out by the Washington naval treaty. However, her nominal weight was below the limitations of the Treaty. Zara was armed with eight 8-inch (203 mm) guns in four twin-turrets - these weapons were among the most advanced of their time.[1] She also carried sixteen 4-inch (100 mm) guns in eight double mounts, as well as decent anti-aircraft weapons.[1] As a pure gunship design, the Zaras did not carry any torpedo armament; they were capable of making 33 knots (61 km/h).[1]

Following her completion, the Zara sailed on sea trials which proved her to be a stable, effective warship. She saw some service before the war, including participation in the Spanish Civil War on the Nationalist side. As well, she was present at several fleet reviews, and participated in the Italian invasion of Albania.[2]

After Italy declared war on the Allied nations, Zara served in several battles including the Battle of Calabria and the Battle of Cape Spada; she survived both of those battles unscathed. She then sailed back to the port of Taranto, and was present at the infamous British raid on the port.[2] She survived the raid without damage. In March of 1941, Zara was part of an Italian task force responsible for attacking British convoys; however, her sister ship Pola was damaged by a torpedo, and she detached from the task force to escort her. However, this eventually spelled her own doom, at the Battle of Cape Matapan.[1][2]

The Pola, without engine power due to the torpedo hit, was immobilized. Thus, the Zara, along with escorting destroyers, were tasked with protecting her. However, they had been detected by British ship-borne radar, and were soon ambushed at night by the British Task force centred on battleships Valiant, Warspite, and Barham. Without radar or night visibility, the Zara took several point-blank salvos from Warspite and Barham, resulting in severe damage. Without power and burning, the order was given to abandon ship. She was thereafter scuttled, with the loss of almost 800 crew members.[1][2]

While the Trento-class cruisers were being laid down, more and more voices within the ranks of the Regia Marina raised concerns regarding the Trento class' overly lightweight protection, questioning their effectiveness in combat. As a result, naval command issued an order to Italian shipbuilders to come up with a more balanced design, while adhering to the 10,000 ton displacement limit imposed by the Washington Naval Treaty.

It didn't take long for the shipbuilders to come to the conclusion that matching the navy's requirements with treaty restrictions was an impossible task. As a result, the Regia Marina altered its requirements slightly while simultaneously granting its shipbuilders permission to exceed limitations if it meant the construction of a capable warship. Thus, the Zara-class heavy cruisers came into being, featuring vastly improved protection over the Trentos, equal firepower and at the cost of only slightly reduced mobility.

The lead ship of the class, Zara, was laid down in July 1929. All four ships of the class saw completion by late 1932 and subsequently entered service with the Italian Navy. In the interwar period, Zara-class cruisers took part in naval exercises and several fleet reviews, held for foreign leaders. During the Spanish Civil War, Zara-class cruisers participated in non-intervention patrols and evacuations of Italian nationals from the region.

In the leadup toward the outbreak of WWII, Zara, Gorizia and Pola supported the Italian invasion of Albania in April 1939. In subsequent actions following the outbreak of the war, Zara-class cruisers often clashed with forces of the Royal Navy in Mediterranean, taking part in intense naval engagements.

However, while being fortunate enough to emerge from the Battle of Taranto in November 1940 unscathed, the class' luck only went so far. As part of an Italian operation to intercept Allied shipping, Zara, Pola and Fiume, along with a host of other Italian warships were engaged by British forces in the Battle of Cape Matapan in late March 1941, which would prove itself as fateful for the class.

During the engagement, all three of the participating Zara-class cruisers were sunk by the British fleet in a night battle, leaving Gorizia as the sole survivor of the class to see the end of the war, albeit heavily damaged while in port at La Spezia.