Difference between revisions of "Venom FB.4" 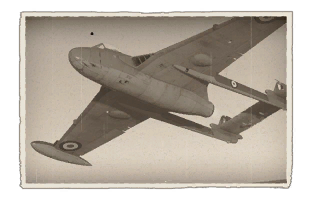 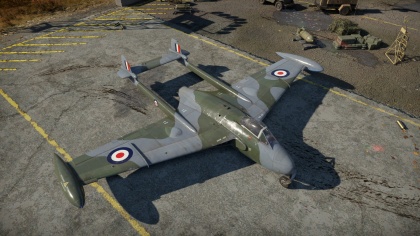 The Venom's play style should be a healthy mix of the two dominating ways of flying jet fighters. The Venom is a fast aircraft, and keeping it fast is important in order to keep up with enemies and to have enough energy to sustain manoeuvres - it should be noted that the Venom is impossible to rip from G's, at least without a very strong effort to do so, so the Venom is indeed a good high-speed performer. However, it does not best either the MiG-15bis or the F-86F-2 in level flight. Therefore, speed alone cannot be relied on for fighting top-tier jets.

Venom pilots should avoid being alone - in fact, the Venom can excel at baiting enemies and/or making them lose energy, leaving them vulnerable to engagement by allied fighters. The fact that the Venom is not the fastest of top-tier jets means that being alone vs two or more enemies requires a multitude of defensive manoeuvres (the Venom excels at lag displacement rolls aka. barrel rolls) to come out alive. Sometimes, all it takes is a barrel roll to get behind an enemy and shoot it down, but against multiple opponents that think before manoeuvring, being alone can spell disaster.

The de Havilland DH112 Venom was a single engine jet fighter which entered service with the Royal Air Force in 1952. Initially developed as a private venture with plans for the export market, the Venom was a direct successor to the de Havilland Vampire and shared the earlier fighter’s twin tail boom design and composite structure. However, the Venom was fitted with a more powerful de Havilland Ghost jet engine which had begun testing as early as 1944 and had a new, thinner wing. The aircraft was armed with four 20mm Hispano cannon and provisions for up to 2000 lbs of bombs or eight 60 lb rockets.

A prototype first flew on September 2nd 1949 and after a successful period of testing, the first production model Venoms to enter service were the FB1, equipping No.11 Squadron based in Germany in August 1952. A two-seat night fighter variant equipped with radar - the NF2 - entered service with No.23 Squadron at Coltishall in November 1953. After a maiden test flight on 29th December 1953, the Venom FB4 variant entered service with the RAF in 1955. Featuring a modified tailplane, an improved de Havilland Ghost 105 jet engine rated at 5150 lbf and an ejector seat, some 250 were manufactured. This was the final land based version of the aircraft to see service in Britain, although variants of the Sea Venom continued to serve in the Royal Navy’s Fleet Air Arm.

Although the Venom’s performance built considerably on that of the Vampire it was still, in effect, a first generation jet fighter and was largely outperformed by contemporaries such as the F86 Sabre or MiG 15. The last RAF Venoms were retired in 1962, although export variants were also used by Sweden, Venezuela, Iraq, Australia and Switzerland – the final Swiss Venoms were not retired until 1983.