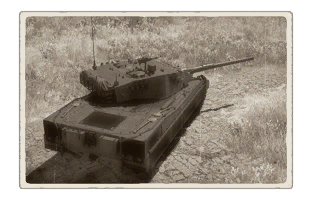 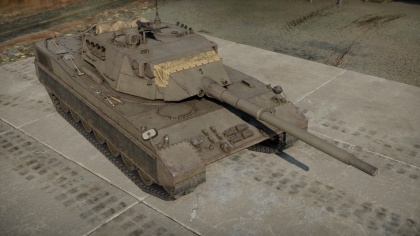 The Carro Armato OTO Melara OF-40 is a rank V Italian medium tank with a battle rating of 7.7 (AB/RB/SB). It was introduced in Update 1.85 "Supersonic".

The OF-40's armour isn't great, but it certainly is in a way better than the Leopard 1's. The OF-40's turret has very weird angles, so you can bounce some incoming shots from there. The sides (excluding the spaced armour in the turret) are only 35 mm thick at most, so you can't rely on the armour as much as you could hope to compared to other tanks that fight at the OF-40's battle rating. The OF-40 has better protection when it comes to the front plate. It is 170 mm thick front-on. Other than that, its hull is very weak, so it cannot be completely relied on. Its survivability is average. In most cases, enemies will only manage to take out one crew member, the gunner and loader are quite spaced out between each other. The same cannot be said about the rest of the crew however. The OF-40 can and will take a hit and with smoke launchers it will survive better than most.

The OF-40 has great mobility, similar to the Leopard 1. It can handle off-road with an average speed of around 40 km/h. On flat surfaces, the OF-40 will reach around 60-65 km/h. It has great static mobility when spaded (not as great when stock). It can keep up with the light tanks and be one of the first to the capture point if you try hard enough.

Even though it is a medium tank, its armour is very similar to the Leopard 1. The mantlet can bounce or soak some APDS/APFSDS shells but it will usually end up damaging the cannon breech and knocking out 1 or 2 crew members

The OF-40 is an overall great tank that can fulfil most tasks on the battlefield. However, the OF-40 has access to something very powerful: a laser rangefinder, which is unheard of at its battle rating of 7.7. With this, you can range out tanks at very far ranges with ease in less than a second. Measurements given will be much more accurate than the estimate the gunner will give without a rangefinder. This makes the OF-40 a great sniper and it exceeds in this field. Using the mobility, the OF-40 can get to the key positions and sniper spots at a good pace. In the right spot, the OF-40 can apply lots of pressure to the enemy team from a considerable range.

The OF-40 was produced in Italy primarily for export to other countries. The only country that took an interest in these tanks was the United Arab Emirates. They purchased many of these tanks. 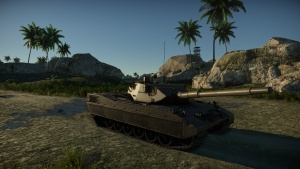