The Medium Tank M26 T99 is a premium Rank IV American medium tank with a battle rating of 6.3 (AB/RB/SB). It was introduced in Update 1.53 "Firestorm". This is a M26 Pershing tank equipped with four rocket pods holding a total of 44 rockets which can be launched against the enemy. 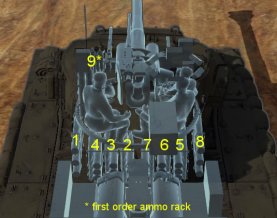 Even being designated as a medium, the Pershing can perform in many different roles in battle. It can be used for supporting allied tanks with long reload time as IS-2's, T32's, etc. Participate in flanking maneuvers — the M26 speed and agility is not brilliant but enough for that — and be successful in sniping and ambushing situations. Use the lower profile of Pershing compared to the Sherman's to navigate through s. The vertical guidance (-10º/20º) allows the M26 to shoot from upper positions without exposing too much of the tank. That´s an advantage compared to Russians which have many ground depression problems.

The 90 mm M3 gun owns a wide selection of ammunition to be used. The M82 APCBC with 200g of explosive filler is extremely deadly. Usually successful penetration with this shell can lead to a quick end to the enemy. It lacks a bit of penetration for the rank this vehicle sits, but it's great for flanking shots. The M304 HVAP shot, gives the vehicle the ability to penetrate thick armour, mind the APCR/HVAP has poor slope characteristics. This means these need to aim for flat armour. Against a King Tiger Henschel, this means aiming for the turret on the gunner side. At that position the M26 can penetrate out to distances of 1800 meters.

Although moderately armoured for a medium tank class, most enemies can easily destroy the M26 at this rank. A safe play style is a must. To reduce direct impacts in frontal engagements angle the Pershing, the V-shape frontal armour can deflect some shots. The lower glacis is a very good target, try to keep it hidden from the enemy. One down side to the Pershing is the engine. The power to weight ratio is poor and does not allow for very quick maneuvering. It uses the same Ford GAF that can be found in the late series M4 Medium tanks, with nearly 8 tons more weight. Being slightly underpowered, the Pershing has a hard time climbing hills. Good knowledge of maps and areas of operation will help immensely, so use them wisely.

If flanking a SPG like Jagdpanther, Jagdtiger or Ferdinand, just aim for the engine, and the vehicle is basically down for easy picking.

In 1944, the main tank development in US Ordnance was the T26E1 tank, which would later become the M26 Pershing. The M26 was made into many different variants in hope it could fulfill multiple roles. One variant hoped to increase the M26's firepower with the addition of rocket launchers, in a manner similar to the T34 Calliope on the Shermans. The rocket launchers was attached on M26 serial number 2011, the 250th of its kind made from Detroit Tank Arsenal. The rocket launcher attached was the 4.5 inch multiple rocket launcher T99, consisting of two racks on both sides of the turret, carrying a total of 44 rockets for use. The rocket launchers were traversable by the same turret controls for the main 90 mm gun. The T99 launchers were mounted on trunnions and could be jettisoned from inside the tank when empty. Settings for rocket firing came at one at a time, two at a time, and a full salvo dump. The last of these settings can fire all 44 rockets within 7 seconds.[1] The design was informally called M26 T99.

Testing with the M26 with the T99 commenced in sometime in late 1945 at Aberdeen Proving Grounds.[1] However, the tank apparently did not seem to have any interest as no other mention of it is made after that. It was presumably cancelled sometime in early 1946.