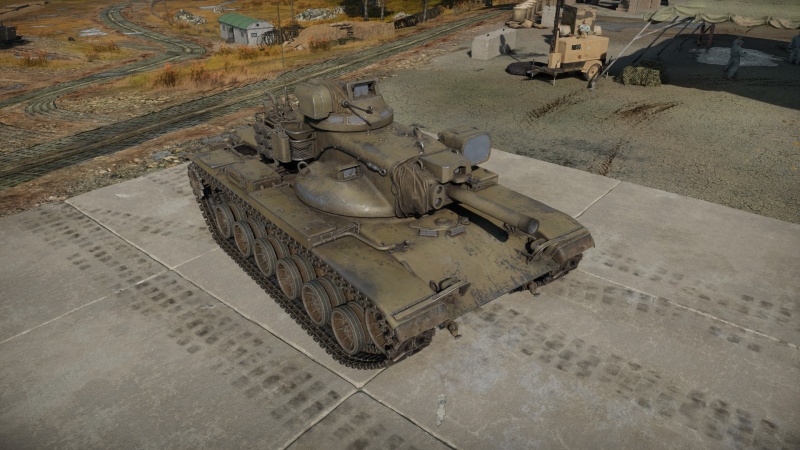 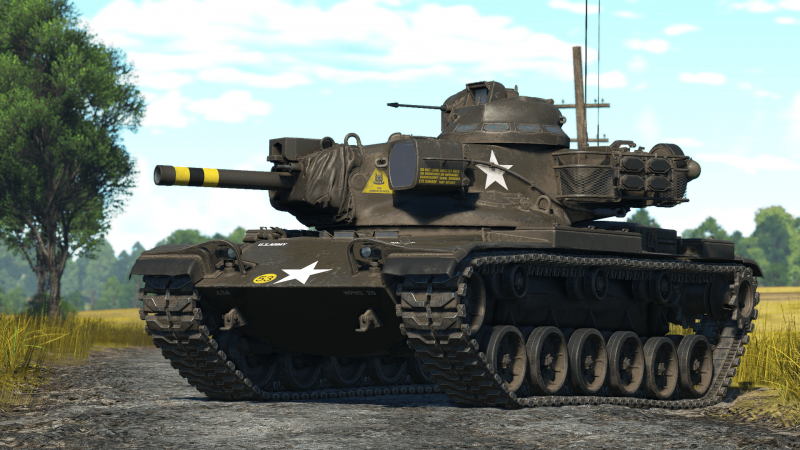 The M60A2 shares the hull with the other M60 variants. That means that the front hull armour is sufficient to stop 100 mm/105 mm kinetic ammunition of the same tier, while it does not protect you against hollow charge shells with a calibre of 90 mm and above. It also has the same 114 mm thick turret base, which is a weak point. The centre part of the turret is a cast 220 mm plate in front of the cannon breech, which while not thick enough to protect you against any shells of even outdated guns, often eats shots (at cost of the cannon breech). The outer parts of the turret are significantly lower than the breech and rounded like in most post war soviet tanks. If not hit head-on, these sides can bounce most of the incoming shots. On top of the turret is a massive cupola for the commander, which is a big weak spot and often gets your commander knocked out, even the whole tank if your opponent is firing shells with explosive filler. The side armour on the hull is thick enough to withstand cannon fire of up to 25 mm (excluding APDS and the part around the gearbox), while cannons with a calibre of up to 40 mm will have significant problems and the tank may withstand a large number of shells. It will however not stop shells fired out of cannons of equal tier. The back of the hull can even be penetrated by HMGs. The turret side is around the cannon is 120-140 mm thick and will resist most shots if angled. The lower part however will most likely get penetrated often due to the reduced thickness the further towards the turret back you get. The hull is completely filled with ammunition, ammo is placed to the left, right and behind the driver (which is sitting in the middle of the front hull). Taking a reduced amount of shells is therefore advisable. The crew is well spaced, a solid shot in the front turret will likely only knock out a single crew member, since all crew members sit next to each other and not behind each other like in most other tanks, but this obviously increases the chance to get destroyed due to a side-shot. Overall the armour will not completely protect you, but you have good chances to eat a bigger amount of shells than most other tanks.

The mobility of the vehicle is average for its tier. With a top speed of 48 km/h (RB) and -11 km/h in reverse, it is not as fast as other tanks like the Leopard 1, but fast enough to get where you want quickly. The manoeuvrability is average to bad: you lose a lot of speed while turning. You can, however, turn on the spot thanks to neutral steering. 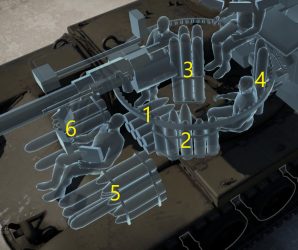 The M60A2 is equipped with a coaxial 7.62 mm LMG and a 12.7 mm HMG on top of the turret. Like on most American vehicles, this allows you to engage lightly armoured vehicles and slow aeroplanes at small to medium ranges.

The M60A2 Starship is the perfect combination of armour, firepower and speed. Based on the chassis of the M60, it has decent mobility and armour while the addition of the 152 mm gun/launcher allows the player to reliably pierce enemy tanks armour at its tier. The Shillelagh missile unlocks the possibility of long-range sniping, along with the powerful HEAT shell. Due to your odd turret design, it is possible to go hull-down, only exposing your gun to fire at enemies, while your loader and gunner are safe from shells. If you are a more aggressive player, you can flank the enemy and hide your position using your smoke grenade launchers. However, the reload time is not that great so immediately go back to cover after you take a shot. Suggested roles are support, sniper, and flanker. 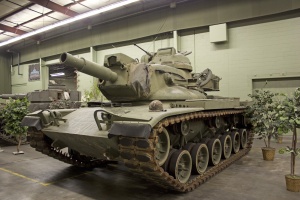 The M60A2 used the Type B turret which featured an unconventional low profile design. The turret base was disc shaped and was very low profile, while the center part was much larger and consisted of a lane running front to rear that mounted the gun breech and behind that the commander's position. The gunner was seated under the disc portion of the right side of the turret, while the loader was located on the opposite side under the disc portion. The commander was located in a rotating cupola at the rear of the center part of the turret. The turret received an interior Kevlar spall liner. A basket was mounted to the rear of the turret for stowage. A bank of four M226 smoke grenades is located on each side of the turret for a total of eight smoke grenade launchers. Additionally, a xenon white light or infrared spotlight could be fitted to the left of the gun for night operations.

Testing of the weapon system found a number of issues. Notably, there were a number of misfires and premature detonations caused by leftover propellant in the gun barrel and breech. As such, a fume extractor was fitted which was later replaced by a Closed Bore Scavenger System (CBSS) which used compressed air to push the fumes out of the gun.

The M60A2 received the M51 Missile Guidance System (MGS), produced by Ford's Aerospace Division. The M51 MGS included an AN/WG-1 ruby laser rangefinder as well as an infrared beam system for control of the MGM-51 Shillelagh ATGMs. The MGM-51 was guided after launch by IR beam which the gunner had to keep on the target (by way of his aiming sight) the entire flight in order to hit the target. The M60A2 was one of if not the very first production tank used by the US Army to include a laser rangefinder. The laser rangefinder allowed accurate ranging of the target up to 4,000 meters to provide the gunner with a firing solution. On the other hand, the laser rangefinder was ineffective at night and was only accurate out to 600 meters at 25% moonlight.

The hull of the M60A2 was originally identical to that of the M60A1. It was powered by a 750 horsepower Continental AVDS-1790-2A engine coupled to the General Motors CD-850-5 cross-drive transmission with two forward and one reverse gear, allowing the M60A2 to reach a top speed of 48 km/h. It used the standard T97 track assembly. Many M60A2s were later upgraded to the RISE standard with an improved AVDS-1790-2C engine and T142 tracks.

The first US Army unit to receive its M60A2 tanks was the B Company, 1st Battalion, 32 Armor Battalion in June 1975.

Ultimately the M60A2 tank was a failure, mostly down to the weapon system. The MGM-51 Shillelagh proved to be an extremely expensive and problematic system due to its advanced technology. There were issues with the propellant as well as the tracking and guidance systems. Not only this, but the fact that the MGM-51 was the only anti-tank weapon at range limited the anti-tank role of the M60A2 greatly; the gunner had to keep the target in his sight during the entire flight of the ATGM from the gun barrel to the impact point. Additionally, the MGM-51 ATGM could not be fired while on the move despite the fully stabilized gun, as well as the fact that the MGM-51 was much more expensive than a conventional round.

These issues, among others, contributed to a poor opinion of the tank by the US Army. The M60A2 even gained the unofficial nickname of "Starship" due to its unconventional turret appearance and advanced technology. The M60A2 was removed completely from service by 1981. Many former M60A2s had their turret removed and replaced by the more conventional M60A3 turret and were put back into service. M60A2s were also converted to noncombat variants in 1985, including the M60A1 AVLB bridge layer and the M60 Panther MDCV mine-clearing vehicle. Many M60A2s were also converted to the M728A1 CEV (combat engineering vehicle) variant as well.

The M60A2 was never cleared for export. 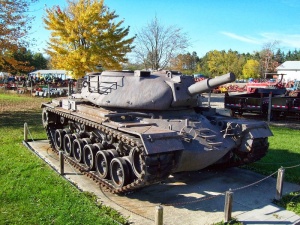