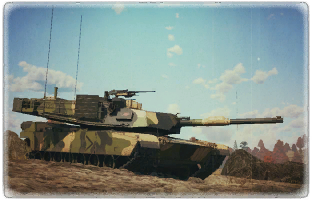 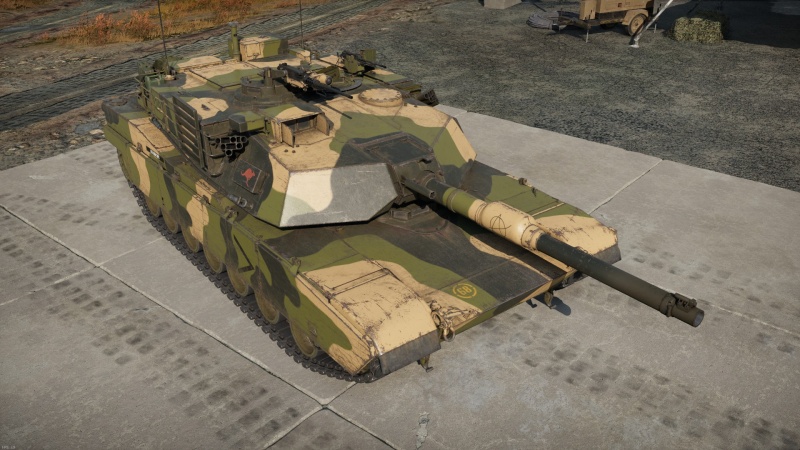 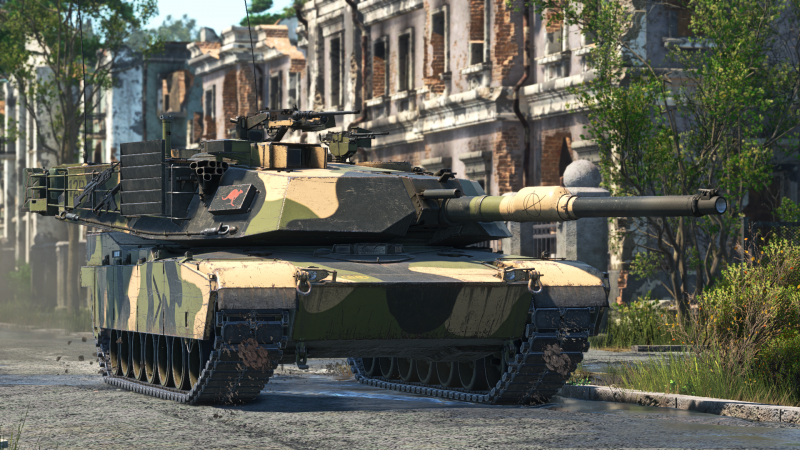 The Tank, Combat, Full Tracked, 120-mm Gun M1A1, AIM is a squadron rank VII American medium tank with a battle rating of 10.7 (AB/RB/SB). It was introduced in Update "Danger Zone".

The exported version of the M1A1 for the RAAC with the AIM (Abrams Integrated Management) package to restore and improve its overall combat capability; thanks to the reworked armour and upgraded FCS, players of the main tech tree Abrams will find that the M1A1 AIM has better awareness than its other variants, with very familiar mobility and relatively better protection.

At first glance, the M1A1 AIM looks identical to post-M1A1 Abrams variants with its iconic 120 mm M256 cannon; but if there's anything that can make it different from the M1A1 and HC variant in US service, it is the AIM package. This gives better protection to the M1A1 AIM in terms of its turret and LFP where revised DU armour was installed to fit the 21st century battlefield. Thanks to its relatively large size overall, players might sometimes find that a penetrating shot does lesser damage as the shrapnel damage is mitigated by the large internal space, smaller calibre shells are the same case as well; but do not take this protection for granted since there is still the infamous "neck" by the turret where penetrating shots have possibility of taking out crew in the turret. Do also keep an eye on the LFP as well since the overall thickness is still insufficient to stop darts at its rank. Like other Abrams, it has a blowout panel at the rear of the turret for protecting the crew from an ammo detonation; make sure to clear the rear right side of the hull of ammunition as a detonation would mean an instant-kill for the crew.

The M1A1 AIM is armed with the 120 mm M256 smoothbore gun, players of the M1A1 HC will soon find themselves at home as they share identical shells.

The stock round is M830 HEATFS, although it might not be effective in the late Cold War where tanks are usually equipped with ERA blocks or composite armour; be sure to take down the enemies from the sides or pick light targets as they will either be knocked out by the explosive contents or melted by the jet stream.

The researchable M830A1 MPAT shell, while having lesser explosive content and penetration, is equipped with a proximity fuze, making it effective against aforementioned targets as well as aircraft - a hit from it certainly critically damage any aircraft, if not taking them down outright.

Since there were limits from the Non-Proliferation Treaty of nuclear-related weapons, including DU rounds, RAAC received the tungsten alloy version of M829A1, the KE-W. Although it has lesser penetration compared to M829A1 at 583 mm, the "Silver Bullet" will still make short work of most armoured targets with one shot. 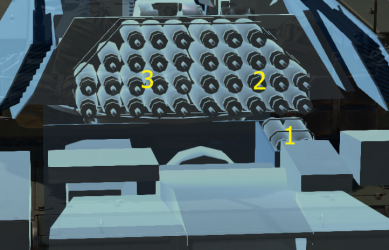 Ammo racks of the M1A1 (identical)

Identical to the M1A1 and A1 HC, be sure to clear out all ammunition in the hull (5 rounds); although the Abrams has a blowout panel to save the crew from turret side shots, a solid hit on those 5 unprotected shells will cause players to quickly meet a miserable end.

The AIM plays just like its regular tech tree counterparts, meaning seasoned Abrams players will already be accustomed to its playstyle. The increased turret protection allows it to make use of hull down tactics just as effectively as the M1A1 HC and M1A2, with the 2nd generation thermal sights allowing for easier target identification and acquisition at range. It can also brawl relatively well because of its quick reactionary ability. The KE-W APFSDS round is perfectly capable of tackling its contemporaries.

The Royal Australian Armoured Corps (RAAC) had been a long time user of European tanks including British Centurions and German Leopard AS1s. However, the Royal Australian Army opted to purchase M1A1s from from the United States as the replacement of Leopards in July 2007.[1] These 59 M1A1 AIM have their DU armour removed to comply with the Non-Proliferation Treaty and were deployed in the RAAC as their new generation MBT. These tanks were planned to be upgraded in the late 2010s, and later plans include building 75 M1A2 Sep v.3 domestically with a non-DU armour package specifically for Australia by 2024 to replace these 59 M1A1 AIMs.