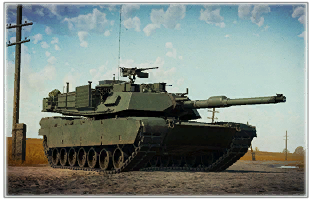 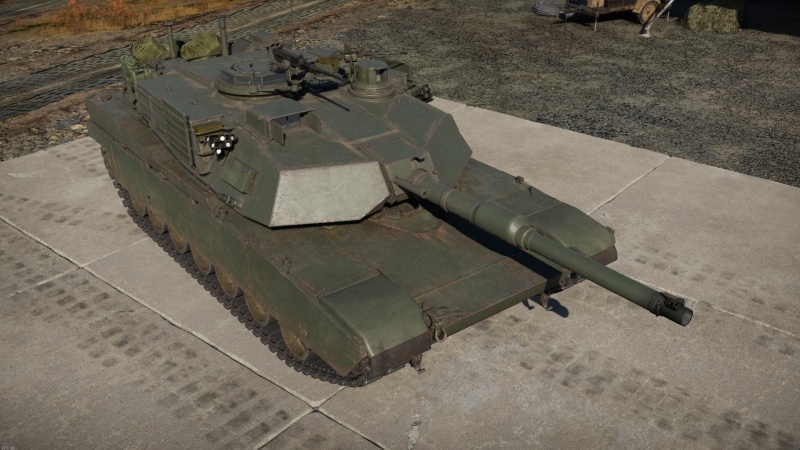 The Tank, Combat, Full Tracked, 120-mm Gun M1A2 SEP is a rank VII American medium tank with a battle rating of 11.0 (AB/RB/SB). It was introduced in Update "Fire and Ice".

The M1A2 SEP (System Enhancement Package) is an upgraded M1A2 Abrams. Its most significant upgrades is the better thermal sights for not only the gunner and commander, but also the driver as well who previously only had access to night vision devices. Another difference of the M1A2 SEP from previous Abrams is the TUSK (Tank Urban Survival Kit) modification, which adds explosive reactive armour on the tank sides to protect against chemical warheads.

In terms of armour, the M1A2 SEP has the same protection as its predecessor from the front, the tank has used depleted uranium composite armour behind the turret cheeks of the tank, as with previous Abrams the turret's overall kinetic energy protection ranges between 680 mm to 780 mm and the chemical energy protection ranges between 1,000 mm and 1,200 mm. As with previous Abrams the M1A2 SEP retains the same weak spots as the M1A2's hull because it doesn't use depleted uranium in the lower front plate as well as the turret ring and breech being weak spots.

The improvements in M1A2 SEP from previous Abrams is that it has from the sides of the hull as it can use the TUSK kit (ARAT ERA) which provides 20 mm kinetic energy protection and 450 chemical energy protection, this will improve protection from ATGMs and HEAT-FS rounds. 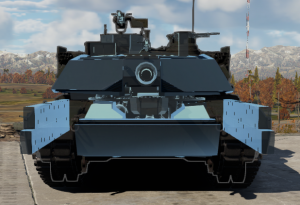 The M1A2 SEP uses 1,519 horsepower AGT-1500 gas turbine like previous Abrams variants, the tank has gained an additional 0.5 tons of weight from M1A2, putting the total mass of the tank at 62.2 tonnes. This causes a slight change from M1A2 which means that commanders should expect the vehicle to respond a bit slower to movement commands compared to previous modifications. However, the tank retains the same 68 km/h top speed and 40 km/h reverse speed as the M1A2 and is still fairly mobile. Without upgrades, the hull traverse is slow and acceleration is lacking as with previous Abrams, however those issues can be remedied by upgrading the tracks, filters, engine and transmission modifications.

As with the previous Abrams tanks, the M1A2 SEP's gun handles very well, with an excellent stabilizer that can be used to accurately fire at any speed and having a quick turret traverse. The gun has good depression and elevation angles which are the same as previous Abrams; negative 10 and positive 20 degrees respectively. An aced crew can reload the gun in six seconds which is the same as previous Abrams, on par with the Leopard 2s but slower than the Challenger 2s, Type 90s, TKX, and Type 10. 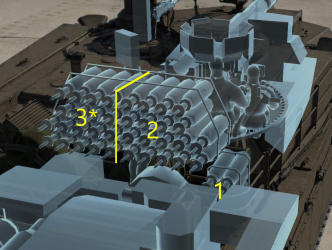 Ammo racks of the M1A2 SEP

In September 1994, just one month prior to the delivery of the first M1A1 HC, which would subsequently evolve into the M1A2, General Dynamic Land Systems was awarded a contract to conduct studies on the development of a modernization package for the upcoming M1A2. The work was intended to study the possibilities of equipping the M1A2 with the latest technology in the areas of firepower, protection and digital assets.

Becoming known as the System Enhancement Package (SEP), the upgrade was envisioned as a whole new production standard for newly produced units as well as being a refit for previously built ones. In 1995, the requirements for the upgrade package were formulated and the production contract was awarded to General Dynamic in 2001, with production lasting up until 2004.

While the M1A2 SEP was still in production, experiences from the US Invasion of Iraq unveiled in 2003 the vulnerability of tanks in urban combat environments. In response to this, American engineers designed the 'Tank Urban Survival Kit' (TUSK). It used readily available components to provide a substantial protection upgrade for M1 Abrams tanks, which could be flexibly fitted onto the vehicles by troops in the field, depending on mission requirements. In 2006, a total of over 500 of such kits were ordered and by 2008 all of the M1 Abrams stationed in Iraq were fitted with this modification.