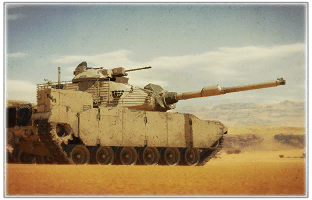 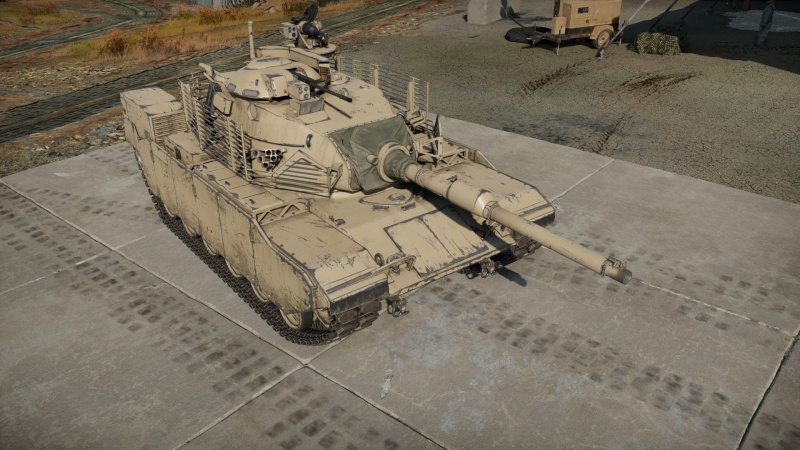 The M256 is the same cannon that is used on the M1A1, M1A1 HC, and M1A2 Abrams. The main item that differentiates this cannon is the round. The M60 AMBT has the "KE-W" APFSDS round which has very high penetration for its BR. The round can be reliably shot centre mass and penetrate most opponents it faces, excluding the top BR tanks in a full uptier. 583 mm at 0° point-blank is an extremely potent round for most engagement ranges you will experience, close to the penetration rate of M829A1 at 598 mm at point-blank range. The AMBT also has access to the M830 HEAT-FS round which can be useful for destroying lightly armoured vehicles and destroying some map obstacles such as buildings or trees. The M60 AMBT also has good gun handling up its sleeve, essentially being on par with top rank MBTs. The vehicle shares the same reload as most other Patton tanks armed with the 105 mm cannon: 8.7s reload stock, 7.7s reload maxed crew, 6.7s reload with an aced crew. 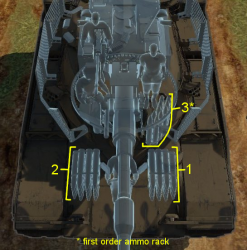 The M60 AMBT excels as a tank which is able to defend cap zones and destroy foes at far ranges. However, it lacks the protection of other MBTs. The main weaknesses of the M60 AMBT are the armour and pure size of it. All enemy tanks which it engages within combat are able to penetrate it with ease.

The cannon is the same cannon which you find on the M1A1, M1A1 HC, and M1A2. It offers great penetration, able to penetrate the toughest of foes. Its armour is that of an M60s. It also shares the same platform as the M60s. It's a tall, high profile tank, which can be seen with ease. However, an advantage of this is it's able to see over objects which most MBTs can't see over, due to their sleek low profile designs.

The M60 AMBT offers thermal sights, which allow it to spot the heat source of the enemy tanks, additionally it has a 25 mm LW25 grenade launcher which can cause major damage to critical parts of the enemy. Using its 25 mm HE grenades to knock out the enemy tank cannons and de-track them preventing them from escaping to safety. To get the best out of this tank, at long range, use the 120 mm cannon to snipe them to do this setup an ambush, watching their cap zones, engage thermal sights and await for the them to come. At close and medium ranges use the map and sneak up on the enemy foes, using the thermal sights to gain your advantage.

To defeat these threats, scan the skies with the thermal sight and you will see the heat source of them. If they are approaching you or have fired a missile - pop smoke and withdraw, await for your SPAA to shoot them down, make sure to tag them on the map! If the helicopter is close, shoot it with your main 120 mm cannon a single hit will see the tail drop of it. Now if the helicopter is right on top of you or within in machine gun range, use the 25 mm grenade launcher which will be able to bring it down with a few well placed bursts. Aim, for the flight deck and engine compartment. The M3P heavy machine gun also has a very fast fire rate which can deter enemy aircraft.