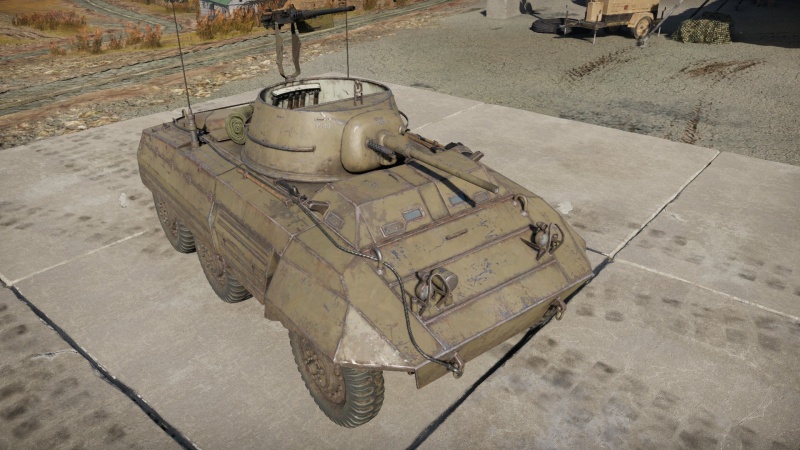 The Light Armored Car M8 is a premium gift rank I American light tank with a battle rating of 1.0 (AB/RB/SB). It was introduced during Update 1.73 "Vive la France" as part of a vehicle giveaway on War Thunder's 5th anniversary.

While it has poor armour and survivability, the M8 Greyhound excels in terms of mobility. As a wheeled vehicle it reaches 60 km/h on road in arcade with stock modules and 40 km/h off road. In realistic it reaches 38 km/h off road, and 55 km/h on road with 7 gears, it also has -12 km/h reverse speed on two reverse gears.

The M8 Greyhound is armed with an 37 mm M6 cannon as its main armament. This is a small calibre fast-firing gun with a maximum penetration of 84 mm at 100 m (M51B1/B2 shell), being able to penetrate almost all the opponents it will ever face. While it lacks the post-penetration damage to one-shot most enemy vehicles, it can quickly finish them off with its fast reload. The penetration and trajectory drop significantly beyond 500 m. Note that the gun has a vertical stabiliser, giving the player a huge advantage in some cases, but keep in mind that the stabiliser only works when the tank is slower than 10 km/h.

Ammo racks of the M8 Greyhound