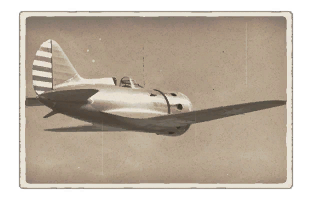 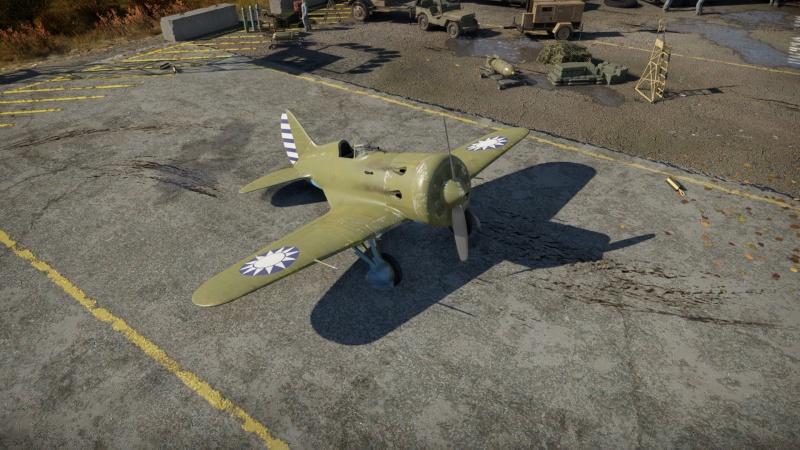 This model of I-16 can only be used in turnfighting. Its characteristics appear to be quite conflicting. It is excellent in turning tightly and continuously, yet when manoeuvring it easily gets into uncontrollable spins which isn't beginner friendly. Also the rather big nose blocks the visibility a lot, offering very poor over-the-nose visibility which is a disadvantage in a turnfight, because when leading a shot the enemy will always get obstructed by the engine, making you guess the shot. Plus, it has an awful telescope-like gunsight, so when zoomed in the I-16's nimbleness is magnified, making the aim super wobbly. You cannot see anything around which greatly reduces you situational awareness. More ever, there is no trim control available in a sim battle and the I-16 always pitch up and down. Although not a lot, it is still annoying when trying to get a precise aim.

It is recommended to set the convergence within 300 m, with vertical convergence on, because the majority of turnfights happen at that range or closer. Also, in a turnfight you must get used to shooting without zooming in, as you really can't see anything with its awkward scope when zoomed it. However when tailing a straight-flying plane that scope doesn't seem that bad.

Before engaging a fight, it is better to have an altitude advantage first. When approaching the fight try to figure out which is your teammate and which is the enemy, to avoid going for a second pass, as the energy retention of the I-16 is rather slow. Also pick your target carefully. For easier aiming, you want to go for those unmanoeuvrable twin engine aircraft like Ju 88 or Ki-45, or bombers if there are any. Given the bad forward visibility of the I-16, these are the best options as they are quite slow and sluggish, and are a bigger target to hit. However getting hits on them tend to do nothing, as your MG has very bad damage. When dealing with fighters, it is way harder to aim. The elevator control of the I-16 is extremely sensitive, giving it good manoeuvrability, but at the same time, bad handling. The I-16 will respond in a very fast turn upon moving your stick/mouse by a little bit, which makes tracking nimble planes quite hard. But once you get used to it, try to lure every enemy into a turnfight, as that is where the I-16 shines. It requires lots of bullets to effectively damage even a fighter, so you have to be patient with this aircraft. If you find an enemy at your 6, utilise your great roll rate to do defensive manoeuvres like scissors to make them overshoot. Or you can simply do tight turns, most monoplanes won't be able to cut inside your turn and they might disengage. Important note: DO NOT put too much rolling and pitching input at once, as aforementioned the I-16 tend to enter spins easily.

Sunderland Mk IIIa - This flying boat's huge fuselage is very spacious and can absorb lots of bullets and shells. It also has lethal defensive firepower: two 7.7 mm in the nose, four forward-facing, two on the top and four at the tail, so attacking from behind, in front or above aren't the best options. If you must attack it, dive under it and suddenly pull up to shoot its defenseless underpart. Aim at the large wings and engines, avoid shooting the fuselage. What will generally happen is that your bullets sprinkle sparks all over it bu they barely do anything.

The Chung 28 (忠28) is an unlicensed I-16 built from the spare parts of I-16s provided to ROCAF. There are few documents mentioning its existence; but most of the remaining documents still give some insight of this aircraft.

After the outbreak of the Sino-Japanese War, the Nanchang Central Aircraft Factory (now AVIC Hongdu) moved to caves in Nanchuan, Chongqing. Earlier in the war, the Soviets had provided parts of I-16s to ROCAF for further assembly. In the caves, an I-16 was put together using the remaining spare parts from the Soviets and mounted with an American piston engine and Soviet PV-1 machine guns, while some rumour that a pair of M2 machine guns could also be mounted. Originally built as a fighter, the I-16 had already proved useless against the IJAAF and IJNAF roaming across the Chinese skies, and thus only 3 of the fighter version were built and the remaining airframes were converted into trainers.