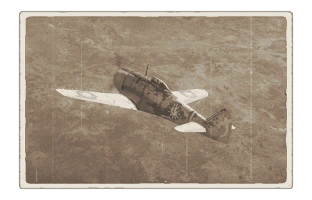 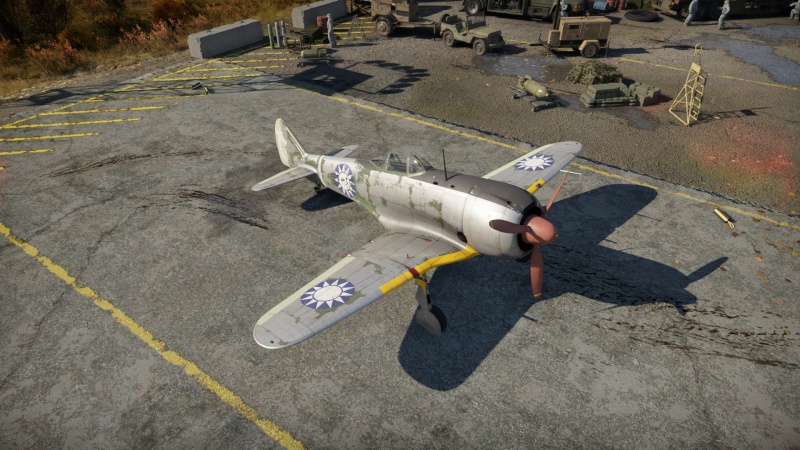 The ␗Ki-44-II hei Shoki is a rank II Chinese fighter with a battle rating of 3.3 (AB/RB) and 3.0 (SB). It was introduced in Update 1.91 "Night Vision". It has identical performance to the original Japanese Ki-44-II hei.

The "Shoki" was named after a powerful king of demons in Chinese mythology, Zhong Kui, said to have a grotesque appearance. The squat and stubby Ki-44 will not be winning any beauty contests, especially not with its degraded camouflage in Chinese service, but it has incredible flight performance for its rank and can be a dangerous opponent in the hands of a skilled pilot. Pilots familiar with the earlier CW-21 will find some similarities in its performance and tactics. This machine was built for speed and climb, but as can be expected for Japanese fighters, its agility is still good compared to planes from other nations.

A very good energy fighter that turns decently and has a very high top speed when fully upgraded of 606 km/h at 6,000 m, being able to reach that height in 5 minutes at a 21-degree angle at 98% throttle. The Ki-44 will maintain a >25 m/s climb rate with WEP below 4,000 m. However, the engine will overheat on WEP very quickly below 5,500 m if manual engine controls are not used.

It is a fast plane, being able to match the speed of almost anything it meets. This is coupled with excellent acceleration, energy retention, high rip speed and low control stiffening, allowing it to pursue after planes that other fighters cannot. The Ki-44 retains the iconic Japanese agility of its country, being able to turn-fight most fighters it encounters, with its high roll rate serving well to keep its targets in sight and to shake off enemies. It is also equal or superior in energy fights to anything it faces, flying loops and energy trapping its foes on a whim.

While it lacks bulletproof glass or self-sealing fuel tanks, the rear armour is helpful for preventing untimely pilot-snipes from low-calibre machine guns when being chased. Head-ons should be avoided and attacks on bombers should be made with caution.

The Ki-44-II hei is armed with four Ho-103 heavy machine guns, with a total of 1,000 rounds of ammunition (250 rounds per gun). The Ho-103 machine gun has a low damage output outside of 300 m due to the low velocity, so the player should make sure to shoot within 300 m. However, inside of 300 m, the Ho-103 has a decent damage output easily cutting off wings and critically damaging control surfaces, but it is still weaker than the M2 Brownings or Berezin UB machine guns. The accuracy is very good overall as two of them are in the nose & the other two are in the wings. The best belts for the Ho-103 machine guns would be either Stealth or Air targets belts depending on playstyle.

The Ki-44-II hei (China) can be outfitted with the following ordnance:

The Ki-44 is not suited for ground attack and bomb loadouts should generally be avoided. In Ground RB the 100 kg bombs may be helpful if no alternatives aircraft are available for CAS, but they are rather weak and need to land on or very close to their target to secure kills reliably.

In-game, the Ki-44 is the pinnacle of point interceptors at its battle rating. At the beginning of any match, use your amazing climb rate to get as high as you can. If you climb at around a 22° angle, you should be able to find yourself far above enemy bombers by the time you encounter them. If there are bombers, those 4 x 12.7s machine guns can do a number on a bomber, but the bombers defences can also do a lot to you. When attacking a bomber, do it in high-speed passes, giving the gunners minimal time to lock on to you. Aim for the wings of the bomber as, while not exactly high velocity, your shells can do a lot of damage to a bomber's wing.

If there are no bombers your next job is fighter interception. Attack enemy fighters using Boom & Zoom tactics to destroy fighters. Use vertical manoeuvres to maximise your energy retention while booming and zooming. As long as you keep your speed up, you should be fine. Horizontal manoeuvres are not highly recommended as it performs worse than in the vertical but will turn with most other fighters if needed especially with flaps. Do not turn fight against more manoeuvrable aircraft like Zeros or Spitfires. Stall climbs can also be used to great effect against opposing planes due to the incredible energy retention and climb rate.

The Ho-103 machine guns are not the best of armaments. They use a shorter cartridge than the familiar M2 Browning used by US aircraft and have a significantly lower muzzle velocity. In addition, the rounds currently have extremely high drag and the HE rounds included in certain belts are not modeled as containing any explosive filler. It is a good idea to use them at close distances as mentioned earlier and to lead the target generously when performing deflection shots. The Ki-44's excellent flight characteristics will at least provide more opportunities to attack and wear down its enemies.

Note that some planes at or below the Chinese Ki-44's rank that it can face are capable of matching it in speed. The German He 100 D-1 is still ludicrously fast (higher top speed while stock than a spaded Ki-44) and the Italian C.202 is only slightly slower, so against these opponents it pays to be more cautious. On the bright side, neither of these aircraft are particularly agile or well armed.

The design of the Ki-44 Shoki (Allied Code Name: Tojo) traces back to Nakajima's other infamous IJAAF aircraft; The Ki-43 Hayabusa. Soon after the design of the Ki-43, Nakajima received orders from the Imperial Japanese Army for an interceptor aircraft with a precedence of speed and rate of climb over the traditional manoeuvrability-focused aircraft the Japanese were more known for. Nakajima set to work on the prototype immediately, choosing the company's own Ha-141 radial engine that provided 1,250 in optimal condition. It was similarly constructed to the Ki-43, retaining the excellent Butterfly Combat Flaps and basic design, and carried two 7.7 mm Type 89 machine guns and two of the recently designed 12.7 mm Ho-103 HMGs that were based on the American Browning M1921. The aircraft's first flight occurred in 1940 and was involved in tests versus Kawasaki's Ki-60 prototype, which was powered by the German DB 601 engine used in the early Bf 109s, and an imported Bf 109 E. Through the many trials and evaluations, it was found to be superior to both designs and was ordered for production under the designation "Army Type 2 Single seat Fighter Model 1A Shoki" and company designation of Ki-44-Ia. The first production variants were fitted with the same armament layout as the prototypes but was found to be lacklustre, so was changed to four Ho-103 HMGs in a model dubbed Ki44-Ib. Only some 40 odd Ki-44-Ias were made including the improved Ib and Ic models.

The high landing speeds and comparatively limited manoeuvrability made it unpopular with pilots, who requested an upgraded Ki-43 instead due to the superior agility. Nakajima responded with the Ki-44-II, which sported the more powerful Ha-109 engine which powered the Ki-49 Donryu medium bomber. The variant also had other minor improvements such as a larger cockpit and a more efficient intercooler. Along side the Ki-44-IIa, the Ki-44-IIc was introduced providing a drastic improvement in firepower, comprising of either 4 x 20 mm Ho-5 cannons or 2 x 12.7 mm Ho-103 HMGs and 2 x 40 mm Ho-301 cannons, which proved to be effective when attacking heavy bombers. This improved firepower however, actually worsened the aircraft's reputation with pilots due to the heavier wing loading causing violent reactions to high speed manoeuvres. It gained more respect later on in its service life due to its extreme potency as an interceptor.

By the end of World War II, relatively few Ki-44s were still in service with the IJAAF. Some of the aircraft used by disbanded Japanese squadrons stationed in China were used by Kuomintang and Communist forces in the resumed Chinese Civil War. Some may have been flown by Japanese mercenaries. After the victory of the Communists and the Kuomintang's retreat to Taiwan, surviving aircraft were used by the newly established PLAAF for a number of years afterwards, though no complete examples exist today.