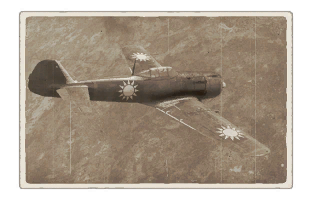 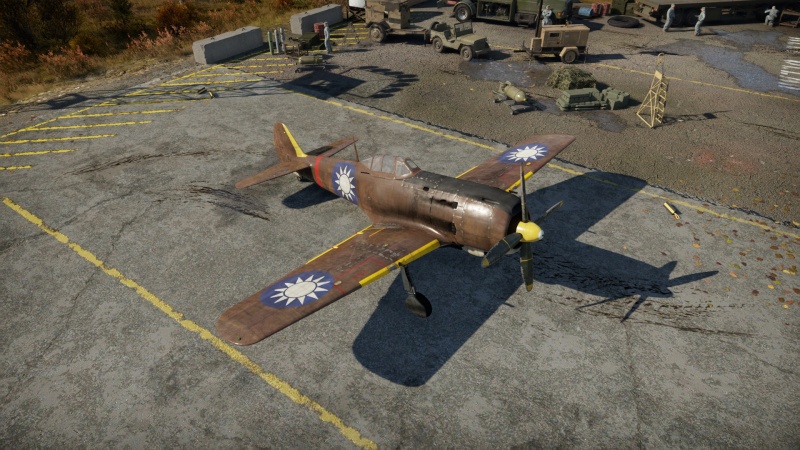 Equipped with a 2,000 hp engine, this aircraft's performance is on par with that of the legendary P-51 Mustang. However, unlike the Mustang, the Ki-84 has slightly better turning characteristics and climb rate thanks to its lighter weight. This being said, the Ki-84 also has good energy retention, so try to make your opponent bleed energy to have an edge. The Ki-84 was also one of the first mass-produced Japanese aircraft to come equipped with armoured glass, armour plates and self-sealing fuel tanks, but the armour is still lacklustre compared to its Russian and American counterparts. However, as always, not everything is perfect. The aircraft controls stiffen significantly at speeds above 630 km/h, making even slight adjustments to heading impossible. Thus, at higher speeds, its elevator suffers. The Ki-84 also suffers a lot when no modules are researched, making the aircraft almost useless until modifications are unlocked.

Wing-mounted cannons require the pilot to align the target of the rounds by the gun targeting distance. The weak weaponry and limited ammunition narrow the window of opportunity for hits on critical components. Shorter engagement distances of sub 300 metres and attacking more fragile targets such as fighters instead of bombers and heavy fighters is recommended.

The Ki-84 ko (China) can be outfitted with the following ordnance:

The Ki-84 being an energy fighter is not suited to carrying large loadout configurations, though auxiliary ordnance can be equipped to support basic ground attack capabilities. Up to 500 kg of bombs allow the destruction of light armoured vehicles and battlefield emplacements.

The strong rate of climb of this fighter allows for a significant altitude advantage to be made in the beginning of battles. As this fighter is usually paired with the Soviets against the Japanese, make sure to utilise this advantage as your Soviet teammates and many of the Japanese fighters that you will encounter will be unable to climb as high as you. However, if German aircraft are present in the opposing team be cautious of climbing too high as they will be able to easily gain an altitude advantage over you.

When encountering Japanese Zeroes (i.e. the A6M5) do not attempt to "turn-fight" them. Instead, maintain your energy with a typical boom and zoom technique as they will be unable to match your altitudes. The N1K2 series and the Bf 109 series have greater rates of climb, but handle slightly worse at lower speeds, hence it is suggested that you should attempt to burn both your opponent's and your own energy using climbing corkscrew manoeuvres to bring both of you into your optimal fighting altitude (~4,000 m) at your best operating speed (< 400 km/h). Here you are more manoeuvrable and have a better chance at taking out these fast aircraft.

Due to your fairly weak weaponry, it is not advised to chase after heavily armoured bombers and instead focus on fighting enemy fighters. A potential approach is to support allied aircraft by maintaining a high altitude above them, preventing enemy aircraft from diving on top of your allies as you can control the airspace directly above them.

Before taking off, bring at least 30 minutes of fuel for longer patrol time. Set the convergence to around 250 m since your weapons have low velocity, therefore needing more precise aim at longer range. While your Ki-84 roars down the runway, you will notice that it shifts severely to the left, thus you must put rudder input to the right to taxi straight. As with other Ki series aircraft, only elevator trim is available, so when the stick is at its deadzone, the Ki-84 will roll and yaw to the left side. Therefore you always need to pull the stick a little to the right which can get a bit annoying. Usually, trim for around -1% when cruising around 470 km/h, around -5% when diving around 600 km/h, and when fighting at around 400 km/h no negative trim is needed. When carrying the 2x 250kg bombload, no negative trim is needed as well. Landing characteristics are forgiving: cut throttle to make sure you are not above 350 km/h before touchdown. Deploy combat then takeoff flaps to further decelerate in preparation for extending landing gears. Extend at around 260 km/h, control your descend rate throughout. Right before touchdown, deploy landing flaps. The gears are quite sturdy. You can break until the plane reaches full stop and not worry about propeller strike.

Some of the Ki-84 Hayate was licensed producted in Fengtian (now Shenyang), China by Manshū Aircraft Company (in Japanese: 満州飛行機製造株式会社／まんしゅうひこうきせいぞうかぶしきがいしゃ Manshū Hikōki Seizō Kabushiki Gaisha) during the war. This company also producted Ki-27, Ki-43, Ki-44, Ki-45, Ki-61 and many other aircraft for IJAAF.

After the Second World War, Ki-84s stationed in Nanking, Beijing and Hankow by the IJAAF were requisitioned by the Kuomintang’s China Air Force. The markings and unit insignia were painted over or crudely removed, stripping away the camouflage and leaving the metal structure visible. The Kuomintang white star on blue circle roundel was applied to the aircraft, and these aircraft were ready for use in the Chinese Civil War spanning 1945 to 1949. Use of the aircraft in combat is supported with little recognition and considering Chang Kai-Shek’s forces were receiving deliveries from the United States, it is believed that these aircraft were maintained as reserve aircraft, should supplies from the US have difficulties arriving.[1]

Alternately, Ki-84s were also requisitioned by the opposite faction of the Chinese Civil War, the People’s Liberation Army Air Force. These were seized from Manchuria and Northern China. Symbols representative of the PLAAF were applied to these aircraft and would establish these roundels as those which would represent the People's Republic of China’s Air Forces in future. Unlike the Kuomintang, these aircraft saw combat, though limited to ground attack missions. To better adopt Ki-84s into the PLAAF, the early period of the civil war saw Japanese pilots flying as demonstrators, instructing Chinese pilots and training mechanics on maintenance. This use would ultimately be limited by the lack of a producible parts supply and by the early 1950s, they were no longer a sustainable aircraft for the PLAAF thus disappearing from service.[1]

The Ki-84 was also captured by the United States immediately after the war, being thoroughly tested to draw comparisons against the P-47 Thunderbolt and P-51 Mustang.[1]