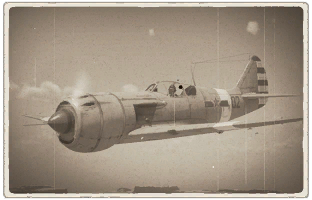 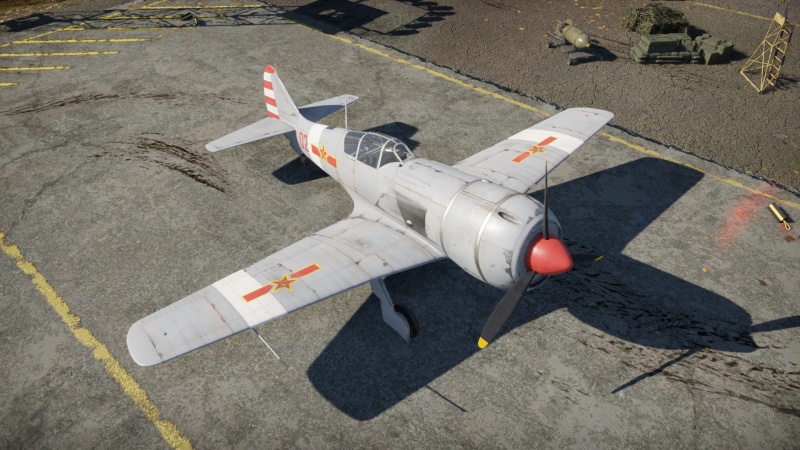 Owners of the La-11 or La-9 will soon find themselves home: the La-11 found in Chinese tech tree is identical to the Soviet one, which again is a long-range and heavier version of the La-9. So a noticeable difference between the two Lavochkins is the manoeuvrability. Due to the weight increase with higher capacity of fuel, at full load, La-11 performs nothing like a La-9. While bringing 30 minutes worth of fuel, or at lighter weight as stated in original flight tests conducted by test pilots, it starts to have similar handling to a La-9.

Since both the Chinese and Soviet aircraft are identical, they share the same M-82FN air-cooled piston engine, which was specialized at below 4,000 m. This engine, at 1,650 hp when spaded, could push the La-11 up to 680 km/h at 6,800 m albeit with worse performance than liquid-cooled engines at such altitude. So keeping yourself below 4,000 m is suggested, which might become a problem when being suppressed by late WWII propellers at higher altitudes.

Equipment-wise, like the Soviet La-11, the aircraft retains the same nitrogen system in all fuel tanks, used to minimize the possibility of enemy hits setting the fuel ablaze.

While the protection of La-11 is still nothing to be proud of; while two bulletproof glass plates and a steel plate behind the pilot can stop machine gun bullets, anything that is considered an autocannon can finish off the pilot with ease.

La-11 was designed to be an interceptor, thus only three NS-23 cannons were mounted on the nose, which can do very little to armoured ground targets.

For those familiar with the Yakovlev Yak-9 family or the Lavochkin duo of propeller aircraft which use NS-23 as their cannon of choice, players can get used to the La-11 fairly quickly; even new players can handle this cannon thanks to its devastating firepower and straight ballistics. A short burst with the Air targets belt can send even the heaviest of interceptors straight back to the hanger with ease. Although it has one less cannon than the La-9, some practice on conserving ammo can certainly enhance the odds to shoot enemies down with fewer rounds used.

Since both La-11s are identical, their playstyle is the same; while in Chinese case, this plane would come before its predecessor, La-9 in the tech tree, so it would also become the trainer aircraft for the La-9 with similar performance.

A common feature of Lavochkin aircraft is the air-cooled engine and the La-11 is no exception: the same M-82FN engine is retained from its predecessor so in terms of speed and acceleration; while having more fuel is a good thing, this costs La-11 quite something in terms of the overall manoeuvrability; therefore, in most cases, 30 minutes worth of fuel is more than enough to handle the battle while giving it the performance of a La-9.

The La-11 experiences severe power loss above 4,000 metres; to make things worse, enemy fighters are very likely to be at least a kilometre above of you and sometimes even up to 3 km. To utilize the La-11 to the greatest extent, attempt to drag high altitude fighters down below 4,000 metres or look for any enemies who have already been baited to lower altitudes. This is where it starts to shine, thanks to its acceleration, even if your hit-and-run or boom-and-zoom failed, the La-11 can run away with relative ease. The three 23 mm cannons can make sure the enemy won't see another day if the shots connect with their aircraft. The La-11 can also serve as a head-on fighter thanks to the straight ballistics of the guns

However, keep in mind that the La-11 suffers from subpar, or sometimes even inferior directional control when the plane is at around 700 km/h, which can be common if you have to chase down diving fighters, so it is essential to learn how to compensate with your ailerons.

Overall, La-11 provides Chinese aviators with an alternative to ROCAF's US-built aircraft with better performance at lower altitudes and high acceleration when needed, but also quite a challenge due to many enemies being more performant at higher altitudes.

Although the La-11 (NATO: Fang) was among the very last propeller fighters and it contributed very little to VVS, they were still an inexpensive supplement for Soviet allies including the newly born PLAAF who were in dire need to expand their fighter fleet with imported fighters.

Like its predecessor La-9, La-11 was first sent with pilots of VVS to aid the defense of larger cities in Mainland China like Shanghai, which was still under air raids from Nationalist forces; these 39 fighters were then transferred to PLAAF in March of 1950. 139 La-11s were handed to PLAAF in total between 1950 to 1953. While some victories were scored at the southeastern coast of China, the first remarkable victory was after the outbreak of the Korean War.

On 30th November 1951, 9 PVAF Tu-2 bombers were escorted by 16 La-11s from 3rd Regiment, 2nd PVAF Division for a ground attack run on US forces on Taehwa-do Island (大和島/대화도) in the Yellow Sea; the bombers were originally planned to be escorted by a few MiG-15s as well, but missed the rendezvous point and thus had to move on with only propeller fighters as escorts.

They were then assaulted by 30 F-86 jet fighters; thanks to La-11's smaller turning radius and better low-altitude performance, Xu Huaitang (徐怀堂) of PVAF managed to shoot down a F-86 during the fight and 3 more were damaged.

While PVAF lost 4 bombers, 15 crew, and 3 La-11s to the USAF, this battle also marked the very first propeller fighter victory over jet fighters for the Chinese and Xu Huaitang received a Battle Award, 1st Class for his victory over Taehwa-do Island.

While the La-11 scored some victories over ROCAF and USAF during the 1950s, it might perhaps be the most infamous aircraft in PLAAF due to a shoot-down incident.

On 23rd July 1954, a DC-4 passenger plane (VR-HEU, named Silver Wing) operated by Cathy Pacific of British Hong Kong was shot down accidentally by two PLAAF La-11s, piloted by Zhao Xu and Han Guangrong (赵旭; 韩光荣, both from 85th Regiment, 29th Division) offshore of Hainan, 10 of the 18 people onboard were killed during the incident (DC-4 shared the same airframe as C-54 Skymaster, a military transporter which was also used by ROCAF and CAT [Civil Air Transport] of Nationalists). On 26th July, during an USAF operation offshore of Hainan, two La-11s were shot down by AD-4s and both pilots were KIA.

The incident was controversial and punishments were issued to both PLAAF commands in Hainan and the pilot duo, as well as payments to the victims; this also marked the most infamous page of PLAAF history and further heated up the turmoil over the skies of East Asia.

The rise of jet fighters during Korean War also marked the end of propeller fighters. La-11s, along with its La-9 predecessors, were quickly withdrawn from the frontline and were only used as trainers or sometimes suppressing rebels in southwestern China. PLAAF stopped the repair of La-11s in 1956 and some of them served as spare parts for Tu-2 (which shared the same engine); when the newer jets eventually replace all the propeller fighters, the last 18 La-11s were decommissioned in 1968, putting a full-stop to the usage of propeller fighters in China.