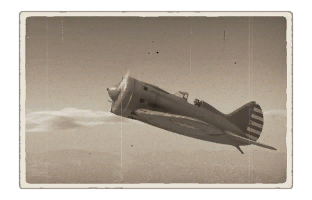 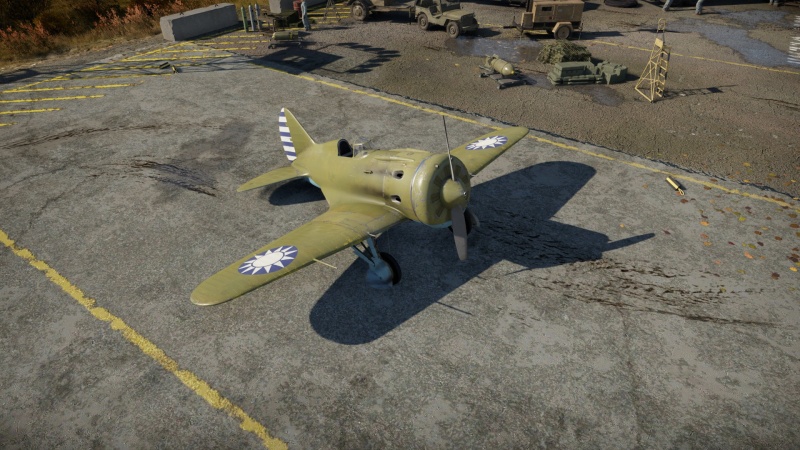 The I-16 type 10 improves upon the I-16 type 5's armament with addition of two extra 7.62 mm ShKAS machine guns in the nose, bringing the armament more in line with other aircraft it faces. It should be noted that the nose machine guns have 200 rounds less ammo per gun than the wing guns so will run out sooner.

The I-16 type 10 (China) can be outfitted with the following ordnance:

This I-16 type 10 is the first I-16 in the Chinese tree to get access to rockets (or any other suspended ordnance for that matter). The rockets can be used effectively against both ground targets and air targets (with a suitable detonation distance set).

The I-16 can be used in turnfighting, bomber intercepting and ground pounding. However in this mode, its characteristics appear to be quite conflicting. It is excellent in turning tightly and continuously, yet when manoeuvring it easily gets into uncontrollable spins which isn't beginner friendly. Also the rather big nose blocks the visibility a lot, offering very poor over-the-nose visibility which is a disadvantage in a turn fight, because when leading a shot the enemy will always get obstructed by the engine, making the player guess the shot. More ever, there is no trim control available in a sim battle and the I-16 always pitch up and down. Although not a lot, it is still annoying when trying to get a precise aim.

Sim is different from realistic, so discard the habit of bringing the least fuel. Bring at least 30 minutes of fuel, although it decreases the plane's performance a bit, it prevents constant refuelling which saves time for patrolling and fighting.

Before engaging a fight, it is better to have an altitude advantage first. When approaching the fight try to figure out which is your teammate and which is the enemy, to avoid going for a second pass, as the energy retention of the I-16 is rather slow. Also pick your target carefully. For easier aiming, you want to go for those unmanoeuvrable twin engine aircraft like Ju 88 or Ki-45, or bombers if there are any. Given the bad forward visibility of the I-16, these are the best options as they are quite slow and sluggish, and are a bigger target to hit. However getting hits on them tend to do little work, as your MGs lack damage. When dealing with fighters, it is way harder to aim. The elevator control of the I-16 is extremely sensitive, giving it good manoeuvrability, but at the same time, bad handling. The I-16 will respond in a very fast turn upon moving your stick / mouse by a little bit, which makes tracking nimble planes quite hard. But once you get used to it, try to lure every enemy into a turnfight, as that is where the I-16 shines. Quite a bit of bullets are required to effectively damage the enemy so you must be patient. If you find an enemy at your 6, utilise your great roll rate to do defensive manoeuvres like scissors to make them overshoot. Or you can simply do tight turns, most monoplanes won't be able to cut inside your turn and they might disengage. Important note: DO NOT put too much rolling and pitching input at once, as aforementioned the I-16 tend to enter spins easily.

Ground pounding ability is limited as there is only rockets. The 6 rockets, with accurate aiming, can destroy 3 targets, whether them be tanks or pillboxes. Once the suspended armaments are gone, the 4 MG are good for killing soft targets like trucks, artillery and AA cars.

He 111 H-6 - This bomber is not only quite durable, but also pretty fast. In level flight it can outrun the I-16 rather easily. Avoid being on its 6 as it will have at least 2 x 7.92 mm MGs facing its tail, and their rapid rate of fire and good penetration is a big threat. Either go for a head-on or use deflection shooting and aim for its engines. If you cannot keep up with it, disengage. If it flies way higher than you, change your target.

Sunderland Mk IIIa - This flying boat's huge fuselage is very spacious and can absorb lots of bullets and shells. It also has lethal defensive firepower: two 7.7 mm MGs in the nose, four forward-facing, two on the top and four at the tail, so attacking from behind, in front or above aren't the best options. Dive under it and suddenly pull up to shoot its defenseless underpart. Aim at the engines, avoid shooting the fuselage.

On the 7th July 1937, fighting broke out between Chinese and Japanese forces, starting the Second Sino-Japanese War. When the war began the Chinese air force was using many obsolete aircraft such as the Hawk III, which were no match for the Japanese A5M fighters.[1] China rapidly signed the Sino-Soviet Non-Aggression Pact with the USSR, and as part of the agreement the Soviets began Operation Zet to secretly supply China with aircraft and pilots.