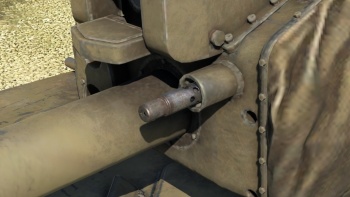 The M73 is an American 7.62mm medium machine gun. In-game the weapon can be found predominantly as a co-axial machine gun on the M48 and M60 family of tanks (historically it replaced the earlier M37 (7.62 mm) machine gun on these tanks), as well as being mounted co-axially on some other rank 5 / 6 American tanks. Being only a 7.62 mm machine gun it is largely ineffective against all but the most weakly armoured, or open cabin, vehicles.

Despite being a completely separate gun the M73 performs identically to the M1919A4 (7.62 mm) and its derivatives.

The M73 can only be equipped with one ammo belt consisting of one Armour Piercing (AP) bullet, followed by one Tracer (T) bullet. Neither bullet has much penetration (maximum of 10 mm), however the AP bullet performs much better than the tracer bullet.

The M73 performs identically to the M1919A4 and its derivatives (L3A1 & M37). Like the M1919A4 it suffers from a somewhat low rate of fire compared to other , similar, machine guns such as the BESA and L8A1, firing 100 rounds per minute less (500 compared to 600). The weapon also has slightly worse penetration than the BESA (7.92 mm), which is the main co-axial weapon of British tanks, although does get a larger ammo belt than other comparable guns.

The M73 is an American 7.62mm medium machine gun, unlike previous American tank mounted machine guns the M73 was designed from the start to use the the 7.62×51mm NATO round (instead of the 7.62×63mm ".30-06 Springfield" round). During WW2 the M1919A4 (7.62 mm) machine gun was the US army's standard co-axial mounted machine gun, and although being a proven weapon it had some limitations in the co-axial mounted role. After WW2 the army commissioned and improved version (the M37), but also looked to outright replace the M1919 with a newer design. The program to replace the M1919 was started in 1951 and faced a series of delays, eventually ending in early 1959 with the Springfield Armory's T197E2 prototype being selected for as the M73, and production starting the same year.

The M73 was predominantly fitted to the M48 and M60 Patton series of tanks, as well as the M551 Sheridan; it featured the ability to be fed from either side and other features which would in theory make it a good co-axial machine gun. In reality the weapon soon proved to be over complicated, and rapidly became highly disliked by tank crews due to frequent malfunctions and a very high rate jamming, compared to the extremely reliable M1919 and M37 they were used to. In 1970 an improved version, the M73E1, was produced in order to address the poor reliability of the original, and in 1972 the weapon was re-designated M219 (rumoured to have been done to try and try and remove the stigma associated with the M73 name).

The M73E1 / M219 again proved to suffer from extreme reliability issues and by 1971 the US army, and the weapons manufacturer, had decided the weapon was a lost cause and begun a replacement program, with with 8 different prototypes being produced (with 5 later being selected for further development). While the American replacement program was underway, on 6th October 1973 the Yom Kippur War started with Egypt and Syria invading Israel. During the 20 day long war Israel used their American M60 (designated Magach) tanks, armed with the M73. After their experiences using the M73 in battle the Israelis declared it unfit for purpose and demanded that the US replace the guns with something more reliable.

The US Army's replacement program was scrapped and they instead evaluated eight different, already existing, machine guns as a more rapid replacement. In the end they selected the Belgian FN MAG 60-40 (7.62 mm) machine gun to enter service as the M240, replacing the M73 on American and Israeli tanks.