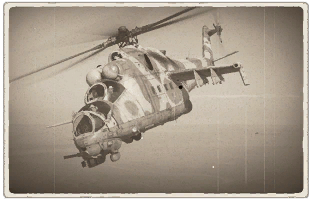 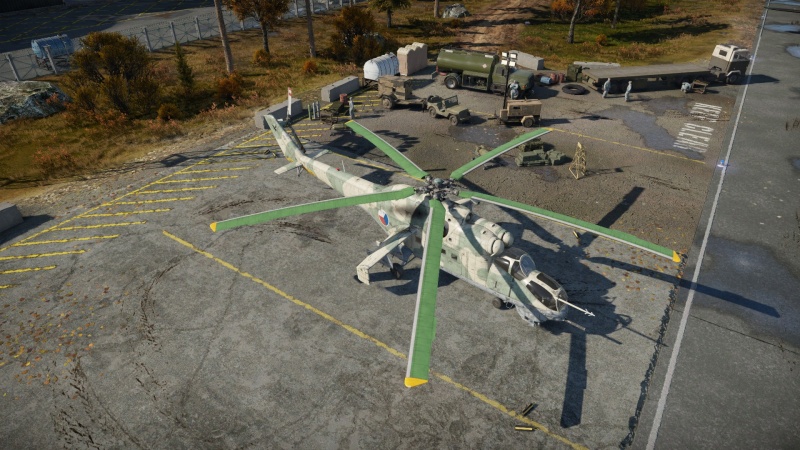 The ▂Mi-24D (NATO Code: Hind-D) is a premium gift rank V Soviet attack helicopter with a battle rating of 9.3 (AB/SB) and 9.0 (RB). It was introduced as a premium pack in Update 1.81 "The Valkyries" and was removed from sale after the 2019 New Year Sale. It was made available briefly for purchase with Golden Eagles

when the vehicle was reviewed by the War Thunder Wiki youtube channel.

One of the most iconic helicopter gunships of the Cold War, the Mil Mi-24 was widely exported throughout the Eastern Bloc as the Soviet Union armed its satellites in Europe and abroad. This Mi-24D is one such example, and flies the colours of the Czechoslovak Air Force. The "Hind" is one of the most heavily armed gunships ever made, possessing extensive payloads and a durable airframe, at the cost of low manoeuvrability. A pair of Klimov TV3-117V turboshaft engines give the helicopter good lifting power and decent flight speeds.

The Mi-24D (USSR) can be outfitted with the following ordnance presets:

The Mi-24D, is the equivalent of the ancient Rome's cataphractarii: it's heavily armoured and packs incredible firepower. The Hinds are one of the scariest helicopters in the game, whether in Air or Ground attack, or even in naval.

The Mi-24D is able to make quick work of enemy helicopters, with its 12.7 mm YaK-B rotary machine gun. To get the best bullet to knock-out ratio - always aim for the critical elements of the rival.

Or if you wish to play with the enemy helicopter, shoot it's wings off with a few well placed shots and it will lose all it's suspended armament. However, doing this will not knock out any machine guns or cannons which it has mounted below on the airframe. Using the ATGMs to destroy enemy helicopters, the Falanga-PV are one of the fastest missiles in the game - they are able to destroy most helicopters with one hit - however helicopters such as Ka-52, Mi-28N & Tiger HAD will need to hit the tail, flight deck or engine since they are heavily armoured.

The Mi-24D has 14 Suspended armament presets, from cannons to ATGMs combinations.

The recommended armaments for this role is:

The extra cannons installed on the wings, allows the Hind to perform the role of an attack helicopter - these cannons are able to destroy enemy helicopters, within a few clicks of the mouse. However, if this is used in an air-to-ground role these cannons can only penetrate lightly armoured vehicles.

The Mi-24D does not have any air-to-air missiles, this means engagement with jet fighters will most likely end up with the Hind getting knocked out. However, it is not impossible to shoot them down. To do this, make sure you are equipped with the ATGMs. Wait for the aircraft to approach you head on and fire, keep the ATGM lined up with aircraft and a few seconds later it should hit.

If the aircraft has missiles, nose over the Mi-24D, gain speed, lots of speed - faster you can do this, higher the odds of the jet missing. Drop the Mi-24D to the ground and pull up after the jet has overshot you. If the jet banks and turns around, fire the ATGM and correct the ATGM so it hits the aircraft during this turn.

The best payload for combined battles is

When enemy tankers see the Hind coming towards them, or see it flash up on the hud, they flea for cover. The Mi-24D, provides eight ATGM (Falanga-PV) missiles - these are enough to knock out eight enemy tanks, with a single hit. The range of the Falanga-PV missiles allow for strikes to happen at a distance, which keeps the helicopter out of range from most enemy SPAA or tanks.

However the first target if seen, should always be enemy SPAA vehicles. Once the SPAA units have been located and knocked out, it is free hunting. The Mi-24D provides 128 S-5K rockets with its eight Falanga-PV missiles. These 128 rockets provide the capability for at least another two enemy tanks to be knocked out. With a skilled shot, it is EVEN possible that over four or five plus enemy tanks can be destroyed using them, on top of the eight ATGMs.

The Mi-24D is a very large helicopter, it's not a small sleek stealthy helicopter like the BO 105 It is a big target - In-order to compensate, fly low and fast. Stay above the tree line, under 20 m so any fussed missiles cannot detonate with their proximity fuses. Proximity fuses do not need to directly hit you, for them to knock you out, they only have to explode within the proximity of the helicopter.

Work started in 1971 on improving the layout of the Mi-24A/B helicopter in Soviet service. Complaints stemmed from the cockpit design, which was regarded as obstructive to the pilot and the weapon system operator's (WSO) view and also having insufficient level of protection for the crew.[1] Two early-production Mi-24A models were converted into the new design in 1972, which became distinguishable by their starboard-side tail rotor.[2] The redesigned helicopter saw the cockpit arrangement transformed into a stepped tandem cockpit, which saw the WSO placed in front, slightly lower, of the pilot. The new arrangement allowed for better, unobstructed view for both pilot and WSO, while having a better armour envelope around the crew. The new layout also allowed the additions of LLLTV and FLIR sensors on the helicopter, which saw the nose gear lengthened to allow enough ground clearance for the additions.[1]

The new Mi-24 variant with the stepped tandem cockpit was intended to receive the Mi-24V ("V" being the third letter in the Cyrillic alphabet). However, the intended Shturm-V missile was not available for the new helicopter.[1] In an interim solution, the helicopter would retain the weapon systems found on the Mi-24B (which consisted of a USPU-24 turret with YakB-12.7 machine guns and the capability of being equipped with 9M17M Falanga ATGMs[3]). This interim helicopter design would be known as the Mi-24D, or by the designation Izdeliye 246. The Mi-24D would begin production in 1973 at the Arsenyev plant and Aviation Plant No.168. After performing in state tests in 1974, the Mi-24D would be put into the Soviet Air Force service in March 29, 1976. The helicopter would serve not only with the Soviet Union, but for its export clients as well.[2]

A trainer version of the Mi-24D, the Mi-24DU Izdeliye 249 was also produced that had the WSO position adapted to hold an instructor pilot instead.[2] Both the Mi-24D and Mi-24DU production at the two factories for both Soviet and export clients account for at least 625 units.[1]

Service in other nations

To replace the old Mi-24Ds, the Czech government purchased US-made AH-1Zs. Some of the inventory Mi-24Ds were donated to Ukraine.[5]

The Bulgarian Air Force have a fleet of 38 Mi-24Ds originally delivered between 1979-1985, during 1999 the Mi-24Ds in service were reduced. The type has suffered from a significant lack of serviceability due to the limited supply of otherwise vital and expensive spare parts, such as rotor blades, as well as expired engine and airframe time between overhauls.

Bulgarian Mi-24D sold to other countries/companies:

In 2004, the Bulgarian MoD moved forward with a tender covering the comprehensive upgrade and life extension of 6 Mi-24Ds – all of these helicopters were delivered in 1985 and 1986.[5]