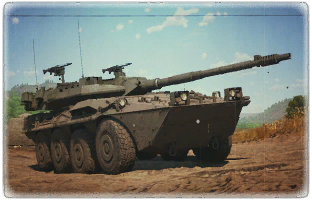 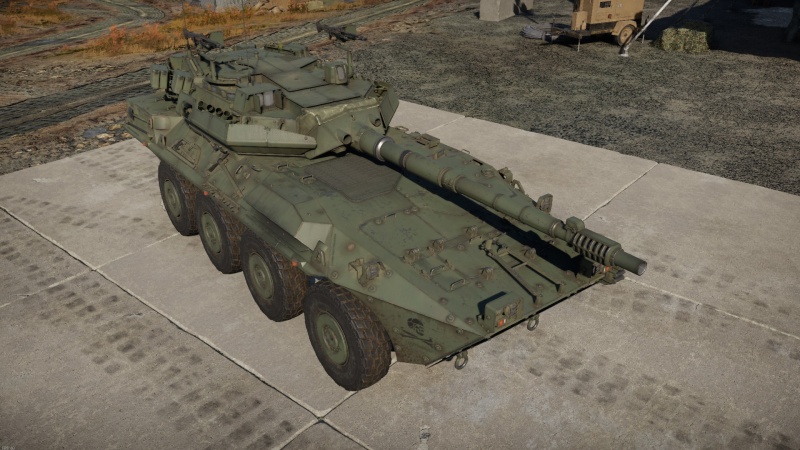 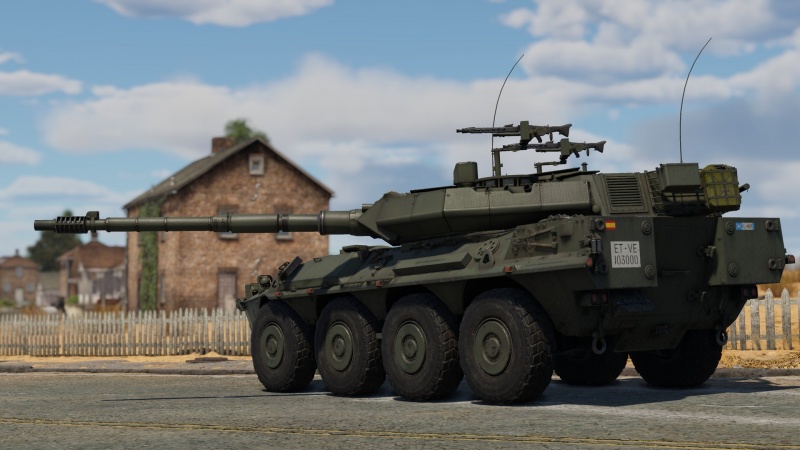 The VRCC-105 has enough armour to withstand attacks from machine-guns but enough to trigger the fuse in APHE type projectiles. The lack of armour however has its benefits as it makes this vehicle very agile.

The VRCC-105 is equipped with two 7.62 mm Beretta MG42/59 machine guns with a high rate of fire. One machine gun is coaxial and operates on the same axes as the main cannon. The other machine gun is mounted to the left of the commander's cupola and moves independently from the rest of the turret. This gives it 360-degrees of rotation. These machine guns can sometimes be effective against helicopters and slow-moving planes, but a large number of bullets are required to take down these targets. Otherwise, the machine guns are ineffective against armoured targets such as enemy tanks and IFVs. They can be used to take down foliage and light obstructions in order to clean lines of travel or sight. If fired at an enemy turret it has the potential to obscure the gunner's view, making it harder for the enemy to shoot you. Otherwise, the machine guns are unremarkable.

The VRCC-105 is a great tank destroyer than can be truly difficult to take out when used by a player that knows both its pros and cons. The VRCC's wheeled configuration offers the player a vehicle which not only is highly mobile, but a vehicle which can support its team in several ways. As a support vehicle the VRCC has access to the binoculars which are able to scout enemy players. Make sure to remain hidden whilst doing this, allowing your team to know where enemies are will ultimately mean that their situational awareness will rise and keep you and the rest of the team safe. Another way the VRCC 105 can scout is with the scout drone mechanic that all players who have bought the vehicle get access to from the get-go. With the scouting drone you are able to bring out a small drone to spot enemies and do battlefield survailance. There is some cons to doing this however, when using the scouting drone you remain defenceless, at the mercy of the enemy team and the protection of your own teamates. Make sure when using it you are hidden or somewhere safe. The pros of using this support drone are quite a lot, for starters it heavily complements your anti-tank gameplay. When using the VRCC 105 you should base your playstyle on speedy stealth flanking strikes or reconnaissance (scouting) with a sharp emphasis on sniping. You have access to a more than capable 105 mm cannon with the ability to fire APFSDS and HEAT rounds. The cannon can pretty much deal with anything your will encounter, as long as you know your enemies weakspots. When it comes to armor, you don't have much to work with sadly. The VRCC is only able to withstand machine-gun fire and at times take hits from low level auto-cannon fire. You do have access to a thermal imaging device, this will be one of the more useful items in your arsenal and will allow you to better spot enemies from behind cover, as well as quickly engage and disengage without exposing yourself long enough for the enemy to see you coming. Though this movement flexibility comes with the loss of armour protection as previously mentioned, you can play well with this vehicle if you are able to master its playstyle.

The story of the VRCC-105 began in Italy during the late stages of the cold war. The Italian army during the 1980s issued a set of requirements for a new vehicle that would have equivalent firepower to the Leopard 1 MBT in Italian service at the time, but with greater combat mobility and the ability to reach greater points of strategic control. In response to this, the Italian companies known as Fiat, Iveco and Oto Melara would have joined forces in a 3-way consortium to begin developing the new vehicle requested by the Italian Army. In this joint venture, Fiat and Iveco were developing the vehicle's hull and power supply, whilst Oto Melara took care of the vehicle's turret, optics and weapon systems. The vehicle would need to be light enough to be be used for recon but also to allow the installation of the turret to not drag the vehicle down. Due to this the Centauro wouldn't be heavily armoured so it did pose a danger to the crew if they were to be hit by an enemy tank. Thankfully what it lacked in protection, meant it excelled in speed. The B1 Centauro was easily able to reach the speed of up to 105+km per hour on road. Due to this feat the vehicle became quite sought after. The B1 Centauro featured a 105mm cannon made by OTO Melara which was able to fire a multitude of NATO standard munitions, such as APDS, HEAT, HESH and APFSDS. In 1986, the final prototype of the B1 Centauro project was unveiled on Sardinia. Impressed by the B1 Centauro, the Italian Military placed orders for a number of vehicles, going in production in 1991 with the first ones entering service as early as 1992. Italy would modify the B1 Centauro during its service, for example some would feature the SICCONA battle management system, but one of the more popular modifications was the introduction of Kevlar shields around the turret which gave an increase in ballistic protection to the vehicle and crew.

Years later Spain would show interest in purchasing the vehicle to allow the Spanish army to retire their AMX-30's tanks. In total the Spanish army bought 84 units, which would be delivered from 2001-2006 in separate batches. The first batch was fully made in Italy, however the second would have mechanical and electronic parts made in Spain, built by the Spanish CIO consortium subsidiaries (OTO-Melara Iberica and IVECO-Pegaso and Amper). Spain also would contract several of their companies to create dedicated munitions for their Centauros. Other modifications fitted also include the time Spain had upgraded their FCS of their Centauros to allow the crew to have access to Gen 2 optics. Another modification although not as common would be the addition of an add-on armour plate in front on the hull. Other than that these Centauros are virtually identical to their Italian counterparts. These Centauro's would be used by the following Spanish regiments; Regimiento de Caballería "Pavía", Regimiento de Caballería "Lusitania" and finally Regimiento de Caballería "España" . For now the Spanish Centauros will remain in service however they may be interested in the evolution of it, the B2 Centauro, to replace them similarly to how the Italian army is doing.

Since 2000, the Italian B1 Centauro wheeled armoured vehicle has been supplied to the Spanish army. With its new operators, the vehicle index changed to VRCC (Vehículos de Reconocimiento y Combate de Caballería - "cavalry reconnaissance and combat vehicle"), but the name itself remained unchanged. The vehicles were built in Italy and differed from the basic B1 version by a slightly modified frontal hull armour and the smoke grenade launchers, the same as found on the second Centauro series. The contract for the second batch of machines, signed in 2002, also included partial licensing of the production for the Spanish domestic market, as well as the modernization of the fire control system by installing a more advanced gunner's Thermal vision device. In addition, the armament of the VRCC Centauro was reinforced with a second light machine gun on the turret roof.