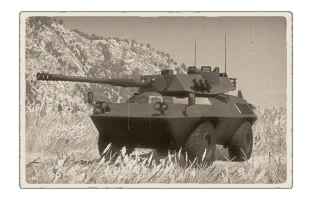 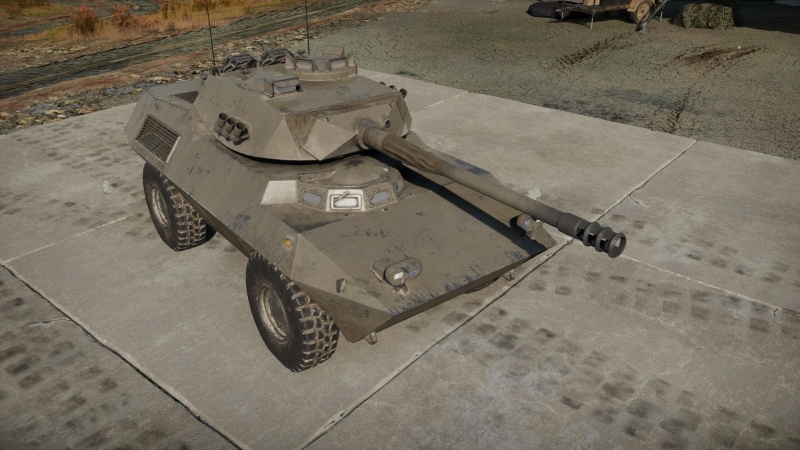 Following comparable mobility from the FIAT 6614, the AUBL/74 offers extra flexibility in the offensive gameplay; with the addition of a new turret featuring good traverse and a low-pressure 90 mm Cockerill Mk.III gun.

As inherent to most light tanks, the lack of reliable armour is one of the most pressing aspects of the AUBL/74. Despite this, the FIAT platform is very mobile on paved grounds and thus excellent to avoid incoming fire if driven with situational awareness. Hence the positioning, the scouting ability and the factor of surprise will be crucial for mastering the AUBL/74. 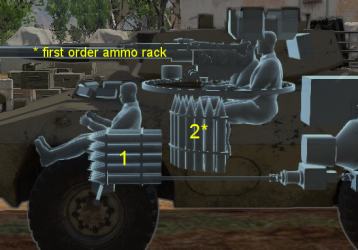 Ammo racks of the AUBL/74

The AUBL/74 is most effective in a scout-support role from cover or when flanking. The extremely weak armour of the AUBL will not be enough to resist any frontal engagements. The HEAT shell can penetrate most enemies at the rank, but the post-penetration damage is unreliable: most shots should be aimed at crew members like the gunner. With the AUBL's slower than average reload speed, an enemy with high crew agility and expert qualification can get their gunner back and shoot before the AUBL reloaded, so the turret or ammo racks are often the best areas to target in order to eliminate enemy tanks. Peaking and firing in shoot and scoot is also suggested, as the small numbers of crew members on the AUBL won't usually resist a shell impact to the turret - firing before being seen is the best way to engage threats.

The AUBL's high speed allows it to secure a reliable over-watch position early in the match and makes it possible to scout enemies and take potshots if the opportunity arises. The flanking approach will be mainly directed towards spotting and opportunistic medium-ranged ambushes, whilst sniping is the last choice and the one requiring most of the skills - because the rather small calibre HEAT rounds and the ballistics might not perform as desired at long distances and could just reveal your location to enemies.

Therefore, playing this vehicle like an M18 Hellcat or any other fast vehicles with shells as the APCBC is ill-advised, because often it won't be able to kill flanked enemies in one reliable shot, leaving the light tank open to retaliation fire. Albeit, the HEAT shell is not completely adverse, it can be a great light tank hunter with the addition of pressure damage (great shock damage to the interiors)

The amphibious ability increases drastically the possibilities of ambushes and locations that can be exploited by this light tank, on maps like Kuban, Eastern Europe or Tunisia. Is important to note the inferior performance on rough terrains, this should be taken into account when deciding to spawn in a snowy map like Frozen pass for example as one of the best advantages of the AUBL, the speed, will be hampered. Switching the vehicle into a more sluggish support light tank than an energetic flanker. Paved roads and urban maps like Maginot line, on the other hand, bring a lot of possibilities to this light tank but could lead to unwanted frontal engagements. Players should contemplate all this when operating the AUBL.

Another issue related to flanking is the engine deck. It will limit the gun's depression when looking from behind the AUBL, so is better to avoid pushing into situations where the enemy might attack from behind or avoid infiltrating behind enemy lines.

Your team can be given an invaluable support with the enemies' location thanks to the AUBL/74's scouting capacities. This is twice as valuable if the player also brings a multi-purpose aircraft in the line up to provide air support. Players that couple the airstrike and scouting abilities of this modest light tank can considerably influence battles. The smoke shells can be equipped depending on the methods of the player and will be good enough to hinder enemy positions and obscure the allied team's advance - at least for a short while.

Despite the apparent passive approach, the support role also supposes to remain close to the brawling tanks in the frontline while performing repairs and having a chance to assist in the point captures. The speedy turret rotation when upgraded does help in this close support usage, as the confrontations require good reflexes and rapid responses. Any needed tactical retreat will happen easily with the good reverse and smoke grenades to cover it. Always have a plan for the next move as it won't be able to turn on the spot, like most wheeled vehicles.

Overall the whole vehicle performance in Realistic battles is hugely affected by the map and the tactical approach to it. Because of the only high-explosive shells available for the AUBL/74 and the mobility limitations, the players might choose to perform support, flanking or not spawning for the battle. If flanking in a tree-covered map, keep in mind the sensibility of the HEAT fuze: even the smallest of the bushes can detonate the warhead and jeopardise the entire vehicle; if fighting in a rural muddy or snowy environment, all speed advantage and flanking potential is lost against the regular tracked vehicles.

In AB, the usage is less complicated. The speed impediment is less present on maps and the brawling style can be forgivingly applied. However, the aircraft machine gun and cannon fire remain a concern, as well as the loss of the element of surprise when attacking other tanks that most of the time will be stronger in either armour or crew size. Playing along with teammates and moving in and out of combat is key to AUBL/74's survival.

The AUBL/74 (Autoblinda 1974) prototypes were built upon the FIAT 6616 chassis which then got modified with a 90 mm Cockerill Mk. III gun or a 60 mm HVG gun. These modifications intended to meet the Italian army requirements for a combat-capable light reconnaissance vehicle and troop transport of the military branches, but perhaps, more importantly, it aimed to evolve as a distinguished yet economic defence solution for the exportation to any developing country amidst the tensions of the Cold war.

Other countries as United States and France, also sought to fulfil this wheeled armoured car role in the warfare business with the similarly configured Cadillac Gage and the Panhard AML 90.

The project was a collaboration between FIAT and OTO Melara and saw thorough use for peacekeeping operations along with the original FIAT 6114 APCs. Its engine, radiators, and transmission were separated behind a fireproof bulkhead to provide additional survivability to the crew. It also featured NBC filters, night vision devices and run-flat tires - The amphibious capability was also an important characteristic.

Unfortunately, there were no interested exportation customers for the AUBL/74 variant and the turreted prototypes of the FIAT 6616 remained in service with Italy.

Other more successful variants were armed with a 20 mm cannon and an optional 9M14 Malyutka ATGM.

Do you know what skill is required to play this tank? It's Luck! (Good luck with that) AUBL/74 - HowToPlay1337