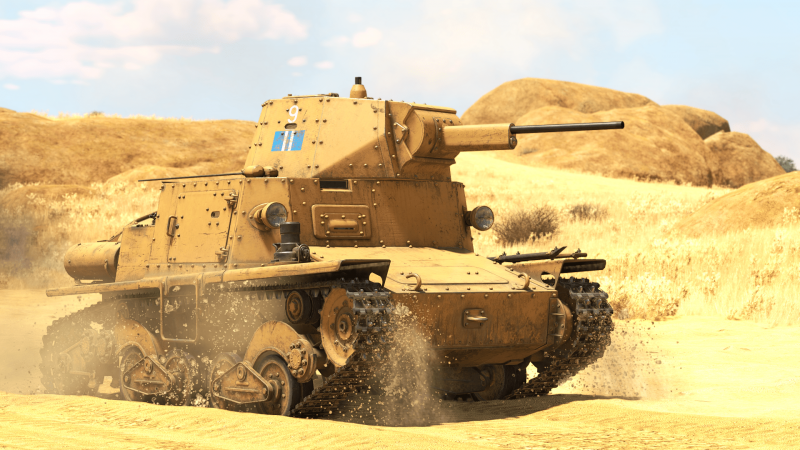 The Carro Armato modello L6 (shortened to L6/40) is a reserve rank I Italian light tank with a battle rating of 1.0 (AB/RB/SB). It was introduced in Update 1.85 "Supersonic".

The small calibre of the Breda Mod. 38 machine gun makes it largely ineffective against all armoured vehicles but the ones with an open compartment. It still can be used to ping targets as a rangefinding help or to mow down minor obstacles blocking the cannon's line of sight.

Whichever playstyle one chooses, it is important to always play to the strengths of the vehicle, mainly the automatic armament and reactive turret traverse. 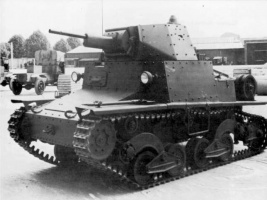 The story of the L6/40 began during the late 1930s, Ansaldo assisted by FIAT were creating a multitude of prototypes in the hopes that it would take over many of the roles of the L3 Tankette. Ansaldo would mainly take on the idea and the doctrine of mountain combat when designing new vehicles; due to the Italian involvement in WW1, they thought that allowing a vehicle to be easily transported to the tops of high mountains would ultimately give them the upper hand if in the future there was a chance for another world war to take place.

This is exactly what they did with the L6/40: they kept the vehicle as light as possible. It would be based on a heavily modified L3 chassis, keeping the two-person crew, but with increased firepower, protection, and mobility. The L6/40 as previously stated, would be designed with mountain-worthy combat specifications in mind. The vehicle had a width of 1.8 metres, this allowed it to travel on all the mountain roads and mule trails that other vehicles of the era would have a much harder time passing through. Its weight would overall be 6.84 tonnes, its name stood for L for Light, 6 for its weight, and 40 for its year of adoption in the Royal Italian Army.

By the time it was accepted for service in early 1940, it was adequate as a reconnaissance tank and as a general support vehicle to supplement infantry and other armoured columns when travelling. However, when it entered general service in 1942 it was hopelessly obsolete, mainly due to the fact that the Italian industry was not able to compete with other nations like the USSR and the USA. Italy created many designs for armoured vehicle during the era too, so it wasn't really a priority for them to try and rectify the vehicle by improving on it without wasting precious resources into the project. In fact, after 283 units had been built, it was cancelled in favour of the Semovente 47/32.

The main characteristic that made the L6/40 stand-out whilst it was being designed was its mobility, it used a FIAT SPA Tipo 18vt liquid-cooled engine which allowed the vehicle to reach speeds of up to 42 km/h. The L6/40's range was 200 km. In terms of armament, the L6/40 used the 20 mm Breda 35, it was installed on a multitude of vehicles at the time. The cannon was able to fire rounds such as the Italian Perforante mod.35 and the German PzGr.40. 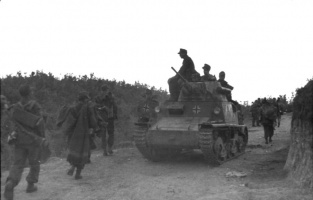 In terms of service, the L6/40 was used in the Raggruppamento Esplorante Corazzato (RECo), the divisional-level armoured reconnaissance task forces found in the order of battle of armoured and motorized divisions, and in several independent reconnaissance units deployed in 4-car platoons. In total, 72 were sent to North Africa, and 55 went to Russia on March 1942, where they equipped the 67th Battaglione Motocorazzato Bersaglieri (lightly armoured battalion) in the 3rd Celere (Cavalry) Division. They were the heaviest Italian tanks used on that front. The battalion was destroyed in December 1942 during fighting on the Don River. L6/40 was also employed in Yugoslavia, by the San Guisto light armoured squadron-group of the 1st Celere Division. The L6/40 would proceed to be used all the way to the end of the war, but also would be extensively used post-war by the Celere police force. Some may have survived and remained in service in subsequent years. Some L6/40's have also survived to this day, one can be found in Legnano in Italy, one is in the inventory of the Kubinka Tank Museum in Russia, and another is preserved in the Arms Museum in the castle of Gjirokastër in Albania.