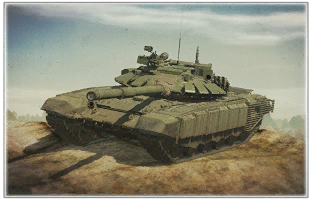 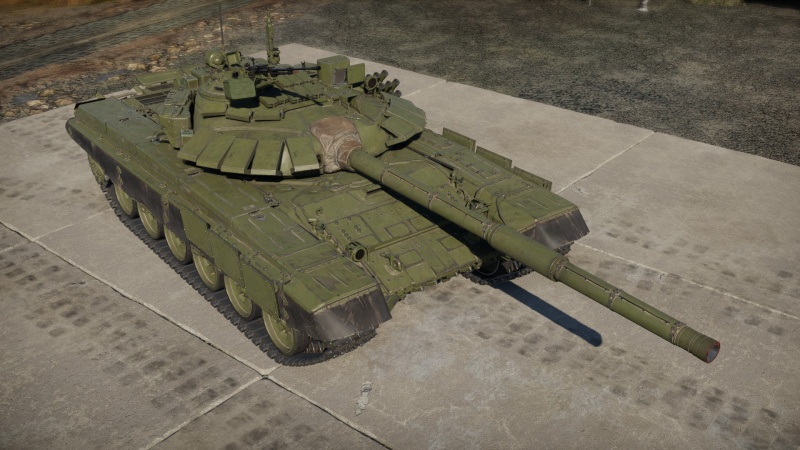 The T-72B3 is a 2010s upgrade of the venerable T-72B (1989). It now has thermal sights for the gunner and the same ammunition selection as the preceding T-90A; useful improvements that allow it to fight top-tier tanks effectively while retaining the T-72B's strong armor, but the unimproved mobility really hurts at its rank. What really brings out this tank's potential is the T-72B3 UBH modification, which installs a 1,130 horsepower engine, adds ERA to the hull and turret sides, and drastically improves the gun handling. This does not completely eliminate the T-72's flaws, such as the 5 km/h reverse speed, but it does make the UBH arguably the ultimate member of the T-72 family in War Thunder — in many respects it is actually better than the T-90A it was intended to be an affordable supplement to, and it complements its distant cousin, the T-80U, as an alternative with lower agility but superior firepower. 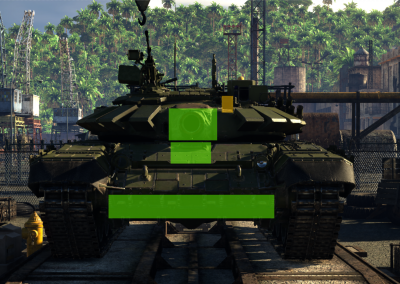 The T-72B3 has the same mobility and manoeuvrability as past T-72B series with its V-84 engine. However, once the UBH package is installed, it has greater mobility compared to previous T-72 series tanks as it has an increase in horsepower thanks to the V-92S2F engine. Compared to its more expensive and gas turbine-equipped counterpart, the T-80U, the T-72B3 has worse mobility and manoeuvrability even with the UBH package. The T-72B3 has mediocre speed and overall mobility compared to NATO tanks which is compensated with armour and low profile. With its powerful engine, the T-72B3 is able to pull and push enemy tanks with ease (winching them is recommended to activate the tank corpse track movement as they will not move if no cable is attached)

The T-72B3 has access to the 2A46M-5 125 mm smoothbore main gun. This gun is nothing new in the Russian MBT tree and fires the same ammunition as seen in previous models (darts vary from the T-72A to the rest of the T-72 and T-90 tanks). This can be considered as a pro as all rounds have same handling between series. As all T-72Bs, they are able to fire the 9M119 ATGM from the main gun. However, the T-72B3 has access to the 9M119M1, a modernized 9M119 with a tandem charge but slightly reduced flight speed. The 2E58 gun control system was also adopted, which greatly boosts the gun traverse speed to a whopping 40° in both horizontal and vertical directions.

The 3BK18M is the first round the T-72B3, as the previous T-72Bs, has access to, it can be considered a mediocre round as most of the enemies which will be faced will be able to withstand it due to composite armour. However, it is particularly useful when facing light armoured vehicles which are prompt to overpressure (SPAA, light tanks, etc) and useful when facing enemy helicopters as it has enough explosive mass and flight speed to be competitive as a last resort. As a hollow charge, it is prompt to detonate mid-air due to trees, bushes and fences. This makes the round difficult to use when in long range engagements as some field elements (forage, objects, etc.) may not be rendered and the round's velocity make aiming harder. 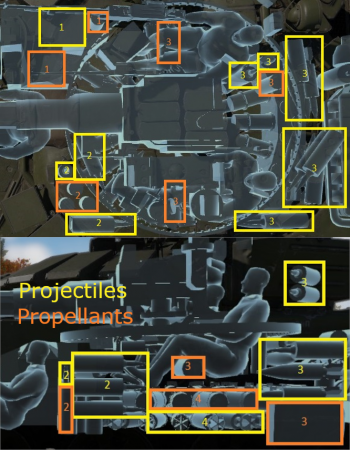 The T-72B3 is the latest modification to the T-72B family. It was a 2011 modification of reserved T-72s which made a complete overhaul to set them on par with the T-90A, T-90S and T-90M MBTs. It featured a change of universal standard double-pin tracks for easier maintenance. It got a heavy increase in firepower which put it at par with the T-90s quickly. It got the Kalina fire control system, kept the past 1A40-4 FCS with 1K13-49 Neman ATGM guidance sight and received the PNM Sosna-U GPS. The autoloader, as the T-90's, was modified to fit longer, more modern ammunition, 3VBM19, 3VBM20, 3VBM22 and 3VBM23. With the UBKh package installed, the vehicle is brought up to the T-72B3M obr. 2016g. standard. The 840hp V-84-1 engine is replaced with the 1100hp V-92S2F, a 2E58 stabilizer with electromechanical drive is fitted, Relikt ERA was fitted on the hull alongside soft-bag ERA on the turret, slat armor to protect against rocket propelled grenades, the main gun is replaced with the 2A46M-5-01, and a 6P49 Kord-T is installed in a RCWS.