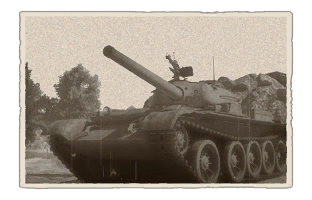 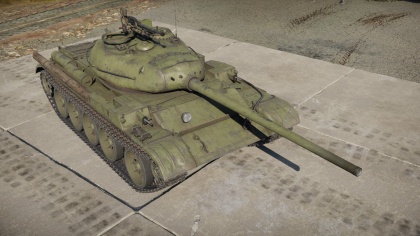 The T-54 (1947) is a Rank V Soviet medium tank with a battle rating of 7.7 (AB/RB/SB). It was introduced in Update 1.43. The T-54 mod. 1947 is the first of the three T-54 variants in the game, and it features the best frontal hull armour of its variants albeit with the weakest turret and gun ammunition. The T-54 is a tank that excels in close-range engagements, where its relatively poor gun performance is less of an issue, and its frontal armour and stopping power can be used to its greatest potential.

The T-54 mod. 1947 is the first T-54 tank available to the player. A good throw-back to player's experience is in the gun, which is the same as the one on the T-44-100, though with a better APCR ammunition. The firepower, speed, and armour of the T-54 makes it an amazing tank and can be played in a variety of roles, ranging from a short-range brawler, a support tank, and a sniper. Basically, the tank has a Jack-of-all-Trade characteristics and can be easily exploited to the player's advantage on the battlefield.

The T-54 is a beautifully armoured tank. Unlike its successors, the model 1947 has more armour at 120 mm thick front hull compared to the 100 mm in the next variants. This means that the front hull armour is vastly superior, but keep in mind that despite that the side armour is still only 80 mm thick. Thus it is actually best to minimize hull angling so the enemy cannot hit the weak side armour and cripple the tank.

The T-54 mod. 1947 does have an "Achille's heel". The biggest weakness is the "trap shot" under the gun manlet, and enemy will know about it from experience. Take note of this weakness and hide it by only exposing the top part of the turret if possible. The significance of the trap shot is that tanks like the Tiger II and Panther II, which cannot penetrate through the front hull, can indeed penetrate through the shot trap.

The T-54 mod. 1947 position on the battle rating scale has it get put into a lower BR bracket frequently, making it likely to fight tanks that don't have powerful guns to obliterate it. However, if uptiered, the T-54 will have to start being played conservatively as there will suddenly be a lot of enemy tanks able to destroy the T-54. 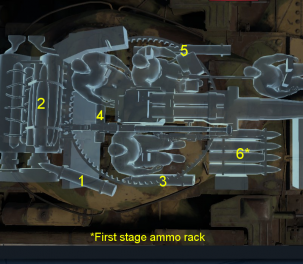 As stated, the T-54's status as a "Jack-of-all-trade" tank means that it can be played in a variety of tactics.

The American M60, German Leopards and the British Chieftain are perhaps the biggest worry the T-54 has against medium tanks. These tanks with their 105 mm guns (120 mm in the Chieftain's case) can penetrate through the T-54's armour at longer ranges with their APDS and HEATFS rounds. Once heavy tanks are taken into the equation with the M103, T-10M, and Conqueror, suddenly the T-54's armour no longer sounds very sufficient against their heavy-hitting rounds. Be wary of many tanks in the 7.7-8.3 BR range.

The army then requested that the gun on the tank be increased for additional firepower. This developed into adding the 100 mm gun onto the T-44 and was designated the T-44-100. The T-44-100 proved successful in testing, but still suffered drawbacks that impeded its efficiency. It was decided that instead of quickly sending the tank into production, further development and modernization on the overall tank design should be made to make the tank the full transition from a World-War II era tank into the next generation. This developed into the T-54 tank that was accepted into service in 29 April 1946.

The tank would enter production at Nizhni Tagil in 1947 and Kharkov in 1948. However, the initial production was slow as the serial production models underwent 1,490 different modifications. The first model produced was designated the T-54-1 (Object 137), which had a thicker hull armour than its future model. This production model suffered quality deficiency, and was cancelled and upgraded into the T-54-2 (Object 137R) in 1949 that featured a new turret and other changes to the hull, transmission, and track design. In 1951, another change was made to the design and was designated the T-54-3 (Object 137Sh). The T-54-3 design featured a new turret design that removed shot traps. A new gun sight and smoke generating system was also installed into the tank. The T-54-3 would become the basis of future T-54 design, with the turret design staying in all of its successor.

Despite the T-54's great performance in its design, the T-54 did not stop at its base model. The first upgrades done was in 1953 and 1955 when the tank's D-10 gun was given stabilization gear, first with a vertical stabilizer in 1953 before upgrading again with a 2-plane stabilizer in 1955. These tank upgrades renamed the T-54 to T-54A and T-54B for the respective years. While an improvement in the tank's performance, the biggest jump came with the advent of nuclear technology in the Soviet arsenal. When testings show that a T-54 can survive the blast of a 2 - 15 kt nuclear charge at 300 meters (700 m for crew survival), the T-54 was slated for the installment of a Nuclear, Biological, and Chemical (NBC) protection system to protect the crew from the weapons of mass destruction. This project was given to the KB-60 design bureau in Kharkov and this was finished in 1956. Along with many other changes to the tank interior, such as a new engine, heating system, fuel tanks, ammo storage, and new guns sights, the tank became the more common T-55 tank, which would replace the T-54 design in production past 1958. The difference in the T-54 and the T-55 other than the mechanical differences is the presence of a dome-shaped ventilator in front of the loaders hatch, it is a T-54 if present as it was removed in order to seal the tank with NBC protection. All in all, the T-54/55 tank series became the most widely produced tank ever, surpassing the T-34 with an estimated 100,000+ built, many due to the export market and licensed manufacturing the Soviets gave to their allies.

The T-54 is a simple and reliable, yet deadly machine compared to its contemporaries at its introduction. The T-54 retained the same interior compartments as traditional designs, with the driving in the front, fighting and turret in the center, and the engine at the rear. The most distinctive features on the T-54 is the dome turret and the space between the first and second road wheels in the front, which would be absent in its successor, the T-62.

The T-54 simplicity and reliability made it a very easy tank to operate, not requiring a thoroughly trained crew to operate (though a better crew can give a better performance). The T-54 also presents a very low profile compared to the American and British tank, which makes it a smaller target to hit. The light weight of the design at only 36 tons made it very easy to transport around on flatbed. The tank also features extra abilities like a cold-weather starting system and a snorkel for deep-wading that were mostly absent on similar vehicles. Finally, the 100 mm D-10T gun was much better than anything fielded as tank armament, able to defeat the American Patton and the British Centurions, which were their mainstay tanks. Even after the introduction of superior tanks like the M60 tank with the 105 mm M68 gun, the T-54 is able to keep up with new HEAT and APDS rounds.

However, the T-54 design suffered from some of these advantages. The small profile gave the tank a small interior volume, which causes such a constraint to crew space that a height limit had to be set. The low turret silhouette also made the tank unable to depress the gun in a large angle due to the gun's breech hitting the roof, which restricts the T-54 ability to enter a hull-down position. Like other tanks in its generation, the T-54 also had an unprotected ammo storage, which increased the chance of a catastrophic explosion of the ammunition if the tank is penetrated in battle.

Most of the service recorded in the T-54 and the T-55 are interchangeable as the two are essentially identical aside from the NBC protection. They will be referred as the "T-54/55" unless specified otherwise.

The Soviets main tank during the course of the Cold War was the T-54/55 and the T-62 tanks, comprising about 85% of the Soviet armoured force in mid-1970s. The first combat usage of the T-54 was in the Hungarian Revolution of 1956. During the conflict, one T-54A was captured by the Hungarian rebels and delivered it to the British embassy. This act inspired the production of the 105 mm L7 gun and the M60 MBT when tests on this T-54 found it superior in firepower and armour. Afterwards, the Soviets did not have many activities with the T-54/55, but they are still in reserve status after being replaced by the Soviet T-72 and T-90 tanks.

The Middle East region saw more usage of the T-54/55 in the conflicts that ensured there, notably in the Israel-Arab conflicts in the Six-Day War and the Yom Kippur War. The Israel were able to beat back the T-54/55 in both conflicts due to superior tactics and air superiority in the Six-Day War, and the presence of superior tanks such as the 105 mm equipped M60 and Centuron tanks, which could more easily deal with the T-54/55 in the Yom Kippur War. Israel were able to capture many T-54/55 tanks intact in both wars and upgraded these tanks with the 105 mm L7 gun, designated as the Tiran-5. The T-54/55 also saw usage in the Jordanian Civil War of 1970 on the Syrian side, the Iran-Iraq War in the 1980s, and even as recent as Operation Desert Storm in 1991 and Operation Iraqi Freedom in 2003, a testament to the utility and reliability of the T-54/55 tanks to still be in use 60 years after its introduction despite its inferiority to the American M1A1 Abrams and the British Challenger II's.

The T-54/55 also saw use in the Vietnam War on the North Vietnamese side, equipping the NVA 203rd Armoured Regiment and many other divisions. The T-54/55 also made appearance in Angola and Mozambique, which were supplied from the Soviets to support the rising Marxist influences in South Africa. These T-54/55s saw use in the South African Border War and Angolan Civil War, but many were lost against turreted armoured car with HEAT rounds. Many other countries in the world used the T-54/55 as well, whether given by the Soviets and their allies or licensed to produce in-country, up to 50 countries in the world used the T-54/55 in their military, including irregular forces in these countries. Notable conflicts using the T-54/55 was in the Indo-Pakistani War in the Indian Army, in the Ugandan-Tanzanian War, Yugoslav Wars, Sino-Vietnamese War, and the Sri Lakan Civil War. The T-54/55 is still being used to day in the modern century, such as the Libyan Civil War in 2011, and the ongoing conflicts of the Syrian Civil War in many sides, including ISIS and the Syrian Army.