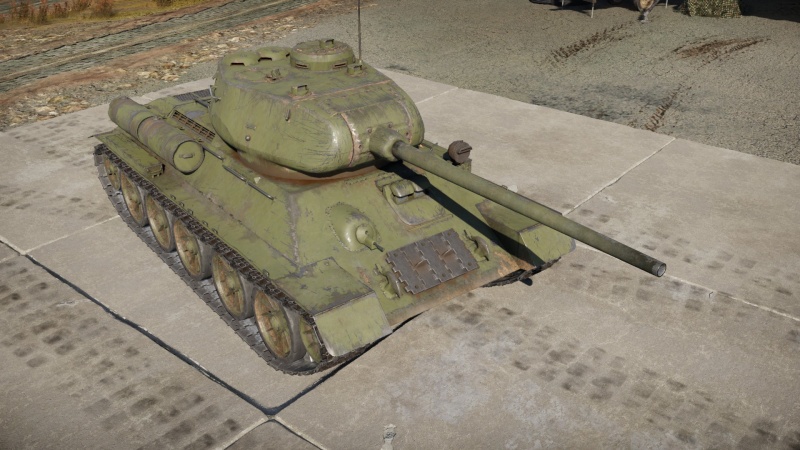 The T-34-85 (S-53) (China) is equipped with the fantastic ZiS-S-53 cannon, with penetrates about 145 mm on the close range with the stock BR-365K round. This might not be enough to fight Tiger IIs frontally, but it works perfectly with other tanks, which are less armoured or you can engage them from the side.

The gun depression is like on many other Soviet vehicles quite poor, with only 5° there are no hull-down manoeuvres possible.

The second round, the BR-365A, only has about 135 mm penetration on point-blank, in exchange for improved penetration against sloped armour. This makes it more effective than the BR365K when shooting at angling M4A3E2's and Panthers. Also, instead of having 48g, it has 164g TNT of explosives inside the shell. This increases the post-penetration effect dramatically.

APCR is also available, but keep in mind that it hates sloped armour and it has very poor post-penetration damage. It penetrates about 195 mm of RHA on close range.

The HE-shell is called O-365K. With 660 g of TNT inside it performs pretty well against trucks and halftracks.

The MG on the T-34-85, the 7.62 mm DT, is quite ineffective in most scenarios due to its poor penetration. It can only disable completely exposed crews on vehicles like M16. When it comes to lightly armoured tanks (eg. M18, Sd.kfz.234/2) this MG will struggle to pierce even their thin armour plates.

The Panthers are one of the most common tanks around BR 5.7, and they pose a great threat with their deadly long 75 mm cannon, thick frontal armour and adequate speed. You want to avoid engaging them at long range as the T-34 has only x3.5 scope magnification, making long-range shooting super hard. Engage the Panthers within 500 m and avoid shooting their frontal hull. Their biggest weak spot is the gun mantlet, which is only 100 mm thick and has a flat part in the middle. That is where you want to aim at, the T-34's APHE has sufficient damage to instantly destroy the Panther even from its turret. The second weak spot is the sides, which more often than not instantly destroys the vehicle. Generally, APHE is enough to deal with the Panthers, and no APCR is needed. The APHE shell loves to chew through the Panther's thin side armour, even if it's angled.

The Tiger's weak spots are the opposite with the Panthers. Their hull is unsloped and rather thin, while the gun mantlet is weirdly shaped and can absorb quite some shells. The best engaging range remains the same, within 500 m. If the Tiger is angling, aim at the turret ring to disable the gunner and destroy the turret traverse, or aim at the hull side below the side skirt, which is only 60 mm. If it is not angling, aim between the driver's vision port and the MG for an instant kill. Avoid shooting at these two parts as they tend to bounce/absorb shells. For the Tiger E, don't shoot at the lower glacis as there will be add-on tracks installed there, making it harder to penetrate.

This is another common enemy. It is recommended to use the BR-365A, the one with less pen but more explosive filler. The reason is that it is better at penetrating sloped armour, which the Jumbo has. With that shell, you can easily destroy an M4A3E2 who's not angling. If it is, aim at the hull side just above the tracks, or load APCR and shoot straight at its gun mantlet. Against a 75 mm M4A3E2, you can relax a bit as it will struggle to penetrate your armour, but your cupola is a rather large weak spot and a shot through there can knock out the T-34. Be more careful with the M4A3E2 76 W, as they can easily pierce through your armour.

The Soviet Union sold numerous T-34-85 tanks along with other vehicles to the People's Republic of China in the early 1950s since the new nation had few and often obsolete tanks (Chi-ha Kai, LVT(A), SU-76M, etc) in its inventory after the conclusion of the Chinese Civil War. The T-34s saw limited deployments with the People's Liberation Army during the Korean War. The history of the tank afterwards has been the subject of debate; according to some sources the PRC attempted and possibly succeeded at creating a local copy of the T-34 under a "Type 58" designation, and according to others this was never a goal, no such tanks ever existed, and only efforts to maintain and repair the T-34s were carried out. Regardless the T-34s were soon superseded by the far superior Type 59, a licensed copy of the Soviet T-54A. However, stocks of T-34s remained in the PLA inventory for a long period of time before domestic tanks were available in sufficient quantity.